Historically architecture as a profession has bestowed recognition on its participants mostly in a later stage of their careers and in many cases they are given their first important projects after their fifties. From Palladio all the way to Mies, their works have taken decades--if not generations--to be of influence to a wider group of practitioners, but not any more.

This is the era of the sculptural modernist, where digital tools allow even the most gymnastic structures to be digitally tested and brought to life. The master architect of this generation also understands the emergence of the connected humanity, where visual ideas can be propagated instantly to a world audience. Transformative work is no longer regional in scope, but gets rapidly adopted by a global community. In this era, with the rapidity of ideas and its dissemination, influence can spread wide and fast, but be fleeting.

Read below the slideshow to learn about the three tenets which define the greatest architects of this generation.

Define a new movement on a global stage.
With Mies van der Rohe's Barcelona Pavilion at the 1929 International Exposition in Barcelona, he introduced modern architecture or international modernism to the world stage. Likewise, in this generation, English architect Thomas Heatherwick stands out with his sculptural structure at the 2010 Shanghai World Expo known as the Seed Cathedral with 60,000 plant seeds embedded on tips of acrylic rods inserted into a cubic shell in a bid to emphasize conservation of earths heterogeneity of plant life. Secondarily, Danish architect Bjarke Ingels also has a stake in this arena with his Danish Pavilion at the Shanghai expo. In this sculptural school also falls the Chinese architect Pei Zhu with his pebble shaped Art Museum for artist Yue Minjun.

Local transformation.
A great building can transform a city, a town, or a village and bring a new world to the local citizenry. Recently, Gehry proved that with his work at Bilbao. Joshua Prince-Ramus the principal architect at OMA NY/REX oversaw the design of the awe inspiring Seattle Public Library and is now transforming the downtown skyline of Louisville, Kentucky with the Museum Tower. On completion, this multiuse multi-layered tower will be seminal in transforming not just this one city but in introducing the new modern urban structural vernacular to the American South.

Introduce a powerful but simple concept for our times, easy to adopt and reinterpret.
In this case, the Canadian architect Todd Saunders, who designed a series of simple clean artist studios on a remote island off Newfoundland. His dispersed group of sturdy ultra-modern buildings have a shelf life of a few generations or so, after which the buildings are supposed to disintegrate and leave the island devoid of manmade scarring. Only the passage of time will test the merits of this idea through its propagation, but the photographic impressions of his work is being widely disseminated to a generation that is growing up on the virtues of giving back to nature.

The images above show the works of Thomas Heatherwick, Bjarke Ingels, Pei Zhu, Joshua Prince-Ramus and Todd Saunders, the 5 greatest architects of the digitally connected generation. For some of these architects their best work is already done and still waiting to be recognized, for others, past work is just a prelude to the genius yet to unfold. An audio interview with architect Todd Saunders is featured in Edition29 STRUCTURES magazine for the iPad now available through the Apple App Store. 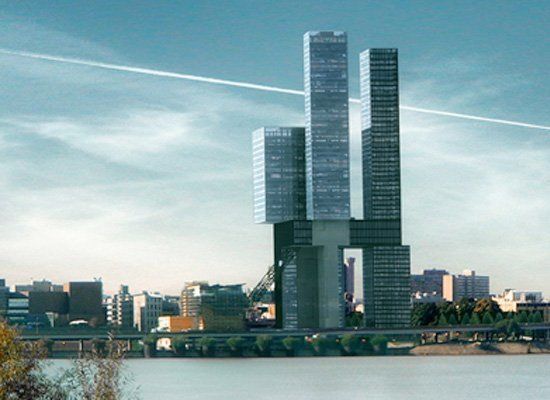