We've shown you famously haunted historical houses like the Lemp Mansion and the Carnton Plantation. But here are five breathtaking historical homes with special Halloween events scheduled for all of you old-house lovers out there. -- Tabitha Sukhai for thisoldhouse.com 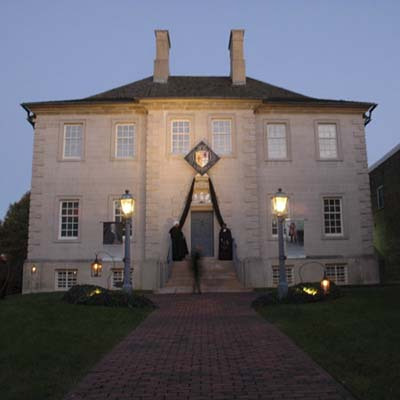 In 1749, Scottish merchant and would-be founding trustee of Alexandria, John Carlyle, purchased two of the best lots in Alexandria, and put up this beautiful mansion -- with its unique stone cornice and ornate woodwork -- by the early 1750s. Just in time for General Edward Braddock to use the Georgian-style home to plan the French and Indian War.

The place stayed in the Carlyle family until 1827 and eventually served as a Civil War hospital, a particular point of interest for visiting ghost hunters. A six-year-long restoration began when the Northern Virginia Regional Park Authority (NVRPA) acquired the property in 1970.

You can visit to see an annual reenactment of Colonel John Carlyle's 1780 funeral (with a reading of his last will), or go on a Historical Haunt ghost tour. Call 703-683-3451 or visit Nvrpa.org for more information. 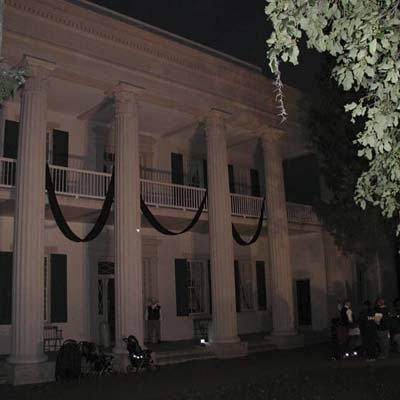 Andrew Jackson's 1819 Greek Revival brick mansion was built on a site chosen by his wife, Rachel Donelson Jackson, who passed away right before his presidential inauguration in 1829. A fire destroyed most of the structure in 1834, and the home stands now as it did after its 1835 restoration, in which all the ceilings were raised and all the windows enlarged. Porches became two-story galleries with Corinthian columns, and elegant double doors open to a central hall with a grand, circular staircase. The interior boasts scenic French wallpaper, marble mantelpieces, and a beautiful library-office.

The home was passed to The Ladies Hermitage Association in 1889. Some of the ladies took turns sleeping there to keep watch while renovations were in progress. Once, the women were awakened by the sound of a horse galloping up and down the main stair; many believe the phantom rider to have been Andrew Jackson himself, demanding they get to work.

Check out the annual, kid-friendly Hauntings at The Hermitage with ghost stories, haunted hay rides, and more. Call 615-889-2941 ext. 211 or visit thehermitage.com for more information. 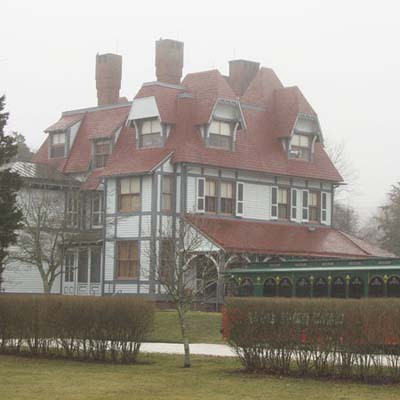 Dr. Emlen Physick's sprawling four-acre estate, a 1879 Victorian mansion, has changed hands only three times in its 130-year history. The home made news in 1878 for its unique Stick-style, featuring geometric decorative elements and irregular rooflines that contrasted with its more traditional neighbors. The exterior features oversized corbelled chimneys, jerkin-head dormers and porch brackets, while the interior showcases classic Victorian molding, fireplaces and furniture.

The herb garden on the grounds is a replica of one planted there in the 1800s, but that's not all that remains from the past. Psychic medium Craig McManus, the author of The Ghosts of Cape May, has identified many spirits still residing at the Physick Estate: The most prominent ones are Physick's Aunt Emilie and the spirits of Physick's beloved dogs.

The Mid-Atlantic Center for the Arts hosts Phantoms of the Physick Estate and ghost tours (kid-friendly and evening options available). Call 800-275-4278 or visit capemaymac.org for more information. 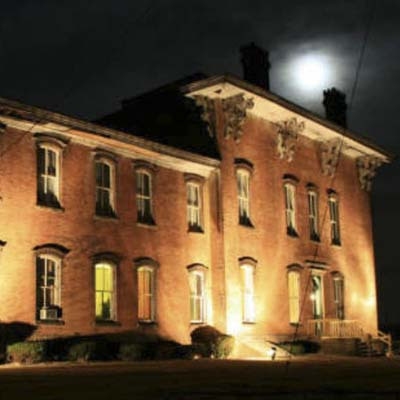 This mansion, listed by the Ohio Underground Railroad Association, was built in 1856 by abolitionist G.W. Adams. The Greek Revival-Italianate is the last remaining of five similar Dresden-area mansions. The home had many innovative features for its time, including a unique refrigeration system in the basement. In the 1980s, local businessman Dave Longaberger saved the 29-room mansion from the wrecking ball. Its current owner -- a descendant of G.W. Adams -- has continued the restoration.

Locals are familiar with the tale of Constance Cox, a young girl who took a fatal fall off a balcony one winter in the 19th century. Since the child couldn't have a proper burial until the spring, her body was kept in the basement icebox where her mother visited with her. The site of numerous paranormal investigations, ghost hunters maintain that the spirits of both Constance and her mother remain at the house.

Prospect Mansion welcomes visitors for paranormal investigations and tours, but warns of "interacting with the spirit of the bounty hunter in the barn." Call 740-617-4200. 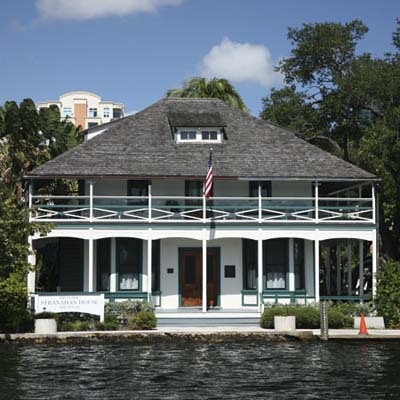 Fort Lauderdale founding father Frank Stranahan built this Florida vernacular-style house for his new bride, Ivy, in the year 1900. Built of Dade county pine, the place changed functions as often as Stranahan changed professions: The house served as a post office (and Stranahan as the county's first postmaster), a community center, and a town hall. Overwhelmed by losses during the collapse of the 1920s and a hurricane in 1926, the owner ended his life on the grounds. Ivy, Fort Lauderdale's first schoolteacher, went on to lease the ground floor as a restaurant and continued to live in the upper quarters until her death in 1971. The home was then acquired by the Fort Lauderdale Historical Society, which began a restoration in the 1980s.

The place now stands in its 1913 configuration. According to John Marc Carr's Haunted Fort Lauderdale, up to six ghosts inhabit the home, including the ghost of Frank Stranahan himself.

Stranahan House docents dressed in traditional mourning clothes will escort you through the parlor, staged for a Victorian funeral, and a tour of tombstones dating back to the 1800s. Call 954-524-4736 or visit stranahanhouse.org for more information.