For two weeks every summer between the ages of ten and thirteen, I went to a Quaker sleepaway camp in the rolling hills of eastern Pennsylvania. (I always like to mention right off the bat that it was run by Quakers because it makes people who are familiar with my general misanthropy and tendency to snark about petty celebrity feuds look at me in a new light, as though I might be filled with inner peace instead of my usual fillings of red wine and partially hydrogenated palm oil). 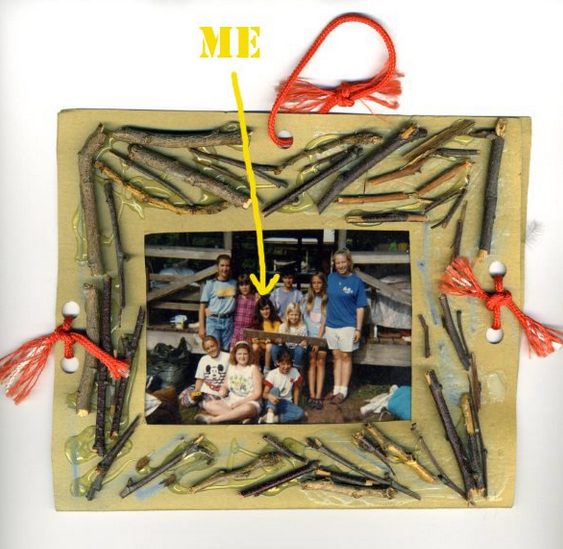 I never really fit in (I was more of an "indoor" child, fond of reading quietly and avoiding activities that required shorts), but I kept going back in the hopes that camp would make me tan and well-rounded, the kind of person who never cried during gym. It was probably obvious to anyone who saw me that I wasn't a born camper: pale, skinny, and shy around people I didn't know, I took every chance I had to seek shelter in the arts and crafts cabin, where I could make yarn God's eyes or SpinArt paintings or lopsided lanyard keychains for hours with absolutely no physical exertion or contact with anyone else.

But even though I like to joke that I "failed" at camp -- which, spoiler alert, you can't really do, unless you set fire to a building or pull a Lord of the Flies -- the experience taught me many lessons that I continue to apply to my adult life. To wit:

Carrie is Actually a Documentary

I'm guessing prison-style showers are awkward for anyone, but being a hormone-riddled adolescent during my first exposure to group nudity wasn't doing me any favors. Neither was the fact that one of my chest nubs (I cannot fairly call them breasts, as they were more like an amoebic version, lurching out of the primordial ooze of puberty) decided to sprout before the other, giving my pale, sporadically hairy body the look of a tiny front-hunchback. It also did not help that the older and more genetically blessed counselors were shaving their legs all around me. Picture the opening scene from Carrie and you get the picture. Just replace the telekinesis with a unibrow.

Nothing Says I Love You Like a Handwritten Letter

Granted, in my camp days the cutting edge of cellular technology was a car phone, and the internet was basically just a clip art file of an anthropomorphic cursor, but mail call was the most joyous time of each day. There was no sign of familial love greater than a care package stuffed with Tiger Beats and Blow Pops, but running a very close second was a handwritten letter on folded notebook paper, which still to this day makes my heart skip a beat (and is why I can never truly hate on the USPS even when the lines at my local post office reach justifiable homicide lengths). Being precocious, I arrived at camp bearing a sheaf of hand-drawn personalized stationery that I had run off at the local copy shop. They bore a cartoon likeness of my own face, with a speech bubble for text. I trademarked my work as an "Uny Toon." (Yeah, I had some time on my hands. See above re: lanyard keychains.) 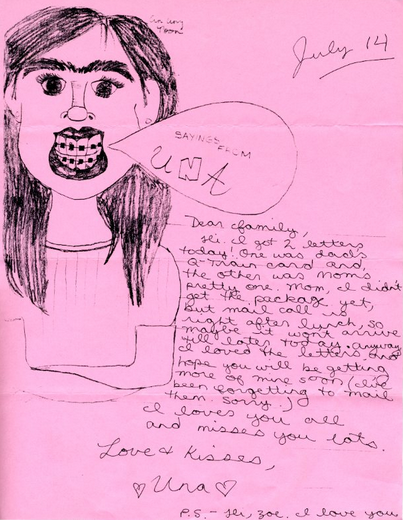 Tragedy + Time = Songs in the Round

Camp songs run the gamut from completely nonsensical (John Jacob Jingleheimer Schmidt cannot possibly be two people's names, I'm sorry) to soberingly self-reflective (I dare you to find a starker example of existential angst than "Found a Peanut"), but my personal favorite ditty was a cheerful celebration, in rhyme, of the sinking of the Titanic, the chorus of which exclaimed:

Oh, it was sad (So sad!)
Oh, it was sad (Too bad!)
It was sad when the great ship went down to the bottom of the--
(Husbands and wives, little children lost their lives!)
--SEEEEEEEEEAAAAAAAAA

It's all part of the healing process, really.

The Higher You Climb, The Harder You Fall

The top bunk was coveted real estate in the cabins at my camp, but since the "walls" were actually just rolled-up tarps that stayed open unless it rained, sleeping on the top bunk also meant risking waking up to find your pillow/Pound Puppy/retainer buried in the dirt under a blanket of morning dew. If there's a more profound metaphor for the journey of life, I'm too lazy to think of it.

Simon and Garfunkel is the Great Party Equalizer

There was always a dance at some point during camp (because why waste such an opportunity for mosquito bites and abject humiliation?) which took place in the mess hall and which I looked forward to much more than I let on. I looked forward to it because my elementary school crush also went to my camp, and I always fantasized that he would ask me to dance to "In Your Eyes," which was played without fail every time, because it was the early 90s and John Cusack was still ruining romantic gestures for everyone between the ages of 12 and death.

But whoever was in charge of the dance music had put together a carefully curated set list that never varied over the years, and after the inevitable letdown of Peter Gabriel's lusty pack-a-day vocals playing to an all but empty dancefloor, the cafeteria would fill with the irresistible hand-clapping intro to "Cecilia" by Simon and Garfunkel, and we would all rush in from our spots along the wall (or, if you were me, by the cookies), acting out the words, getting down on our knees and begging each other please to come home.

That song remains a crowd-pleaser among my now thirtysomething friends. (And I still listen wistfully to "In Your Eyes," but that doesn't really count as a lesson so much as a recurring therapy topic.)

Una LaMarche is a proud graduate of Camp Onas, which is still going strong and might even still play the same mix tape at the dance for all she knows. Her debut young adult novel, Five Summers, also set at camp, comes out May 16 and is available wherever books are sold.

This story will appear in the Summer Issue of our weekly iPad magazine, Huffington, in the iTunes App store, available Friday, May 24.