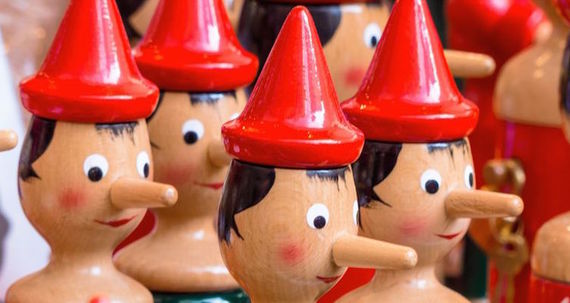 Have you ever stretched the truth a little? Told a white lie? Be honest now. You must have -- and maybe it was even well-intended to protect your feelings or someone else's.

Everyone lies at some point in their lives, even if it is unintentional. It starts when we are young.

In fact, 60% of people cannot go 10 minutes without lying in some form or fashion, and often do not even realize it.

Why does lying come so easily to many? There are several reasons. Even as children, they learn that telling the truth does not always yield a pleasant outcome. So, they take the less painful option and hope they do not get caught. And since everyone wants to be liked and respected, lying to cover up blunders is often a primitive form of self-preservation.

While lying may come naturally for many, leaders in particular must rise above this tendency to stretch the truth. Otherwise, they run the risk of losing the trust and respect of their team once their lies are brought to light.

And more importantly, they will start to lose the trust they put in themselves.

I lead a team of distributed employees across the U.S. as CEO of Aha! Our success depends on adhering to a well-defined strategy and an honest exchange of information. We are not perfect, but we make every effort to be responsive and accountable to each other. We need to get right to the point and identify problems so we can move forward with the right ideas.

Cutting through the "reality posturing" keeps us all on track towards our goals. And I find that there is a certain beauty in living an honest and direct life.

If you are in a leadership position, I encourage you to root out the half-truths, exaggerations, and bald-faced lies that come from your own mouth. Simply say what you mean and do what you say -- or do not say it.

We are all on a journey to being a better version of ourselves. So, start today. Here are some common lies that leaders tell. Have you heard these before? Cut just one out and you might be a better manager tomorrow than you are today. And if you are not managing anyone yet, listen for these in your organization and avoid making them your own:

"The project was very successful."
Sure everyone wants to be perceived as wildly successful. But telling half the story does a disservice to the whole team. Worse, no one learns from their mistakes or improves. The next time a project does not perform as well as expected, do not sugarcoat the results. Instead, share the low points along with the high points. Offer an honest assessment of where you went wrong and what you will do differently next time.

"I do not recall you requesting those figures."
This classic stalling move has a dash of cruelty thrown in. You forgot to complete a task that someone requested, or you procrastinated in order to work on more important projects. Instead of telling the truth, you make the other person wonder if they made the request at all. Resist the urge to play mind games. Simply confess that you forgot, apologize, fix it if you can, and be more responsible next time.

"I never approved that."
You gave your stamp of approval without thinking, then resorted to backpedaling when the project tanked. You were overly confident and certainly did not expect a disaster ahead. Do not try to lie your way out of it; your one lie will just beget more lies. It is better to admit that you acted hastily and did not think through all the potential problems completely.

"Bob screwed up this one."
Some leaders will throw their team members under the bus to save themselves. This leaves employees feeling confused, unjustly attacked, and more than a little angry. A good leader does just the opposite. He takes ownership of his mistakes and sometimes takes the blame for others as well -- even if he is not at fault.

"Honestly, I had nothing to do with this."
This is the ugly cousin to the phrase above, with the disreputable "honestly" thrown in for added effect. When you say this, you are making a last-ditch effort to deflect blame. This immature response only comes off as a desperate attempt to cover your tracks. And using the word "honestly" makes people wonder if you were truthful with them before.

Lying can become a habitual problem. Once you start this pattern, it becomes more difficult to untangle the mess you have created, and you must expend extra effort remembering who you told what. That can be exhausting.

When you lie, you may escape ridicule and embarrassment for the moment, but you revert to the old modus operandi of childhood and fail to grow. You also hurt others and set a poor example to those you are supposed to be leading.

Being a leader means owning responsibility through good times and bad. Sure, leaders make mistakes. But trying to cover them up only results in mistrust and failure down the line. Telling the truth is simply a grown-up way of doing business.

What's the greatest lie you have heard a manager tell?