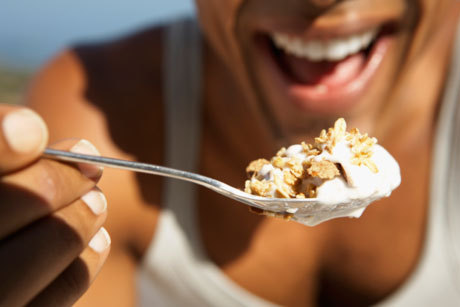 You may know that so-called low-fat and fat-free diet foods are often packed with sugar, salt, and chemical-laden additives. There are lots of "healthy foods that aren't really healthy." But did you realize that your body digests these "healthy" alternatives in record time, leaving you hungry for more? That's only part of the problem, according to New York City dietitian Keri Glassman, the author of The New You and Improved Diet. Packaging, no matter how well-intentioned and honest, is another culprit: When people see low-fat on a label, they think they can eat more than they really should and end up chowing down on 28 percent more calories, according to research from the Cornell University Food and Brand Lab.

Below, we've rounded up five common low-fat foods that aren't scoring you a six-pack anytime soon.

Chips
Low-fat chips taste a whole lot better than they used to, thanks to the addition of more salt, carbs, and other additives. When fat is removed from chips, manufacturers make up for lost taste and texture with the salty stuff. Many bags of low-fat chips contain about 20 percent more sodium and 15 percent more carbohydrates than their full-fat versions--not to mention about twice the number of ingredients. If you're craving snack foods, here are the 12 healthiest options.

Peanut Butter
You already know peanuts are little fat repositories, but this is mostly good fat: Polyunsaturated fatty acids increase protein concentration and the size of muscular cells, adding to your lean muscle mass without a single workout, according to research published in Clinical Science. What's more, old fat stored in the body's peripheral tissues can't get worked off efficiently without new fat to activate fat-burning pathways in the liver, according to research from the Washington University School of Medicine in St. Louis. What many food companies don't tell you is that they've replaced that healthy fat with maltodextrin, a carbohydrate used as a filler in many processed foods. This means you're trading the healthy fat from peanuts for empty carbs and double the sugar for a savings of a meager 10 calories. So next time you're making a PB&J, ditch the empty calories in the low-fat alternative and opt for the full-fat original--just be sure to spread it on in moderation.

Cheese
You'll be hard-pressed to find low-fat or fat-free cheese at the deli counter. Why? Because the less fat your slices include, the less cheese they include, too. In fact, many processed cheeses are labeled "cheese food," meaning that only 51 percent of what's inside has to be cheese. The rest can be whey solids, preservatives, emulsifiers, coloring, and other additives, says Glassman. No matter how tempting lower numbers on the nutrition label may be, preservatives will ultimately be what's helping you pack on the pounds.

Soda
Artificial sweeteners are up to 13,000 times sweeter than real sugar, dulling your taste buds and coaxing you to reach for sweeter and sweeter foods, says Glassman. Research by the Health Science Center at the University of Texas has shown that even cracked-out rats prefer saccharine (a popular diet-drink sweetener) over cocaine. No wonder diet-soda drinkers' waists are about five times larger than those who opt for the regular full-sugar versions of juices and soft drinks.

Yogurt
When fat is removed from yogurt, sugar is added for flavor--and guys don't need any more sugar. According to new data from the Centers for Disease Control and Prevention, men ages 20 to 39 consume 397 calories from added sugar each day, leading directly to weight gain and chronic health conditions, Glassman says. Remember that labels list sugar in many forms, such as maltose, corn syrup, molasses, dextrose, sucrose, fructose, glucose, and high-fructose corn syrup.

Read all the ingredients before you guiltlessly plow into a food with a label cheerily declaring its weight-loss powers. If you stick to foods with ingredients that actually exist in nature, you can enjoy a full-fat diet and drop pounds doing it.