There are five millions reasons that the United States can't seem to fix the insane and inhumane deportation policies that tear families apart and punish hard working immigrants. Protests can get angrier and louder but until the five million reasons are addressed, there will be no solution to the deportation problem.

Very few taxpayers have ever heard of the Congressional Bed Mandate -- the quota that requires 34,000 undocumented immigrants be detained every single night -- but it's costing them five million dollars, each and every day.

The Bed Mandate is the main engine powering the deportation machine that's chewing up the lives of so many good people. The mandate is wrong on every level, from ethical to fiscal. It's so wrong that I wish I could just blame it on the Republicans.

But when it comes to the Congressional Bed Mandate, Democrats are a big part of the problem, which brings me back to the five millions reasons. This betrayal of immigrants is about dollars. It may be a cliché to say "Follow the Money" but even in the strange universe of immigration reform, tracking down the cash can lead to some very interesting places.

How else can one explain the votes of immigration reform minded Democratic congressmen and congresswomen like Henry Cuellar (D-TX) or Ann Kirkpatrick (D-AZ) who voted to keep the crazy boondoggle of the Congressional Bed Mandate in place?

The money trail on the Bed Mandate leads from immigration reform directly to another pressing issue of our time -- America's private prison industrial complex.

You probably know the statistics about how the U.S. incarceration rate, per capita, is the highest in the world. This is due in no small part to the explosive growth of the private prison industry and inconceivable contractual demands such as "100 percent occupancy" rates. In the Public Interest noted:

As reported by National Watchdog Group, the Center for Media & Democracy (CMD):

George Zoley is America's highest paid "corrections officer" and CEO of private prison giant GEO Group. Zoley made $22 million in compensation between 2008 and 2012. CMD estimates that GEO Group makes 86 percent of its revenue from the taxpayers. GEO Group writes language into private prison contracts that forces taxpayers to keep prisons full or else pay for empty beds.

The Congressional Bed Mandate is another manifestation of the private prison debacle and because the victims weren't born in the United States, there's a significant percentage of the country who doesn't even want to hear about the problem. This is the impact of the dehumanization of undocumented immigrants.

There's no outcry if they aren't treated humanely.

Why are Democrats like Cuellar or Kirkpatrick going along with it? Why were they among the Democrats who voted against ending the Bed Mandate? They had a chance when legislation called the Deutch Amendment was brought up that would have ended this cruel and inhumane policy. 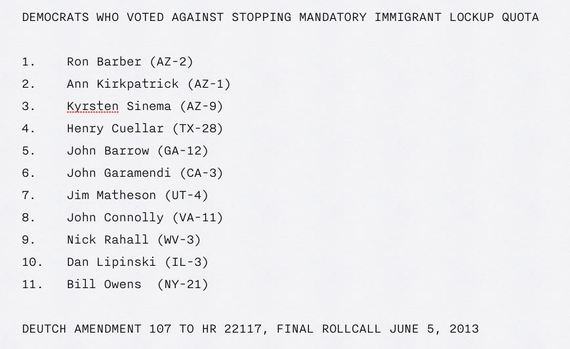 Why didn't they stop it? Five million reasons a day.

You see, the Bed Mandate requires that five million dollars a day gets doled out to private prisons and other detention facilities. Some of those facilities just coincidentally happen to be located in Cuellar's and Kirkpatrick's respective districts. The same is true for other Democrats (and even some pro-immigration reform Republicans) who also voted down the Deutch Amendment as shown in the below map. 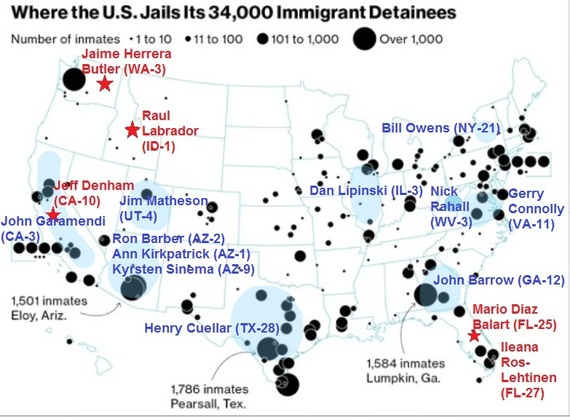 The money meant more to them than the suffering.

Republican or Democrat, remember this on election day.