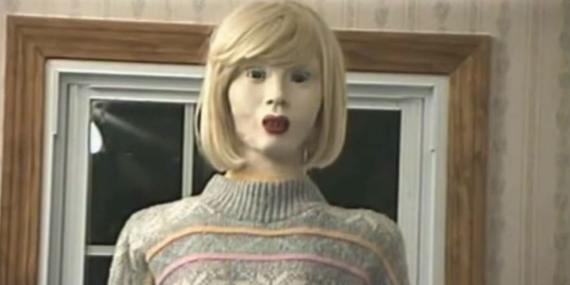 The internet urban legends known as creepypastas had a breakout year in 2016 as the internet-based folklore tales took off, thanks in a large part to Syfy's new anthology horror series, Channel Zero, which took on individual stories for the small-screen. This sudden spotlight came after years of being passed around on message boards, YouTube videos, and even special websites that were made for deconstructing and supplementing individual story mythology. Creepypastas aren't just for weird recesses of the internet anymore.

Creepypasts are effective for many reasons, including the way they take advantage of the fact that their disturbing narratives have hard to pinpoint origins, and that everyone takes them very seriously. Even when posting a creepypasta of your own to places like Reddit's r/nosleep, the guidelines specify you have to keep it real. "Everything is true. Outside of NoSleep, a story may be fact or may be fiction. The important thing is that while you're here, treat everything as though it is a true recount of events."

The creepypasta stories just keep on coming, and here's a few new ones that should make 2017 even creepier.

Creepypastas exist on the edge of memes and nightmares, which makes Tara the Android a perfect example. A YouTube clip called "I Feel Fantastic" was uploaded in 2009, and went briefly viral. While most people have forgotten about it, the legend has quietly built from there. The two-and-a-half-minute clip is comprised mostly of tripod shots of a pale female humanoid robot named Tara singing a song called "I Feel Fantastic" in a room followed by an outdoor scene in a backyard, and the whole thing supposedly hides a killer's motives. The person who made the video is allegedly a serial killer who dresses Tara up in his victim's clothes with that bucolic backyard being the place where he buries all his victims.

Experiments gone wrong are a classic creepypasta setup, with The Russian Sleep Experiment being an all-timer. The Harbinger Experiment is in the same vein, telling the story of an occult-loving scientist named Zimmerman who set out to "test and observe the effects of extended isolation on the human mind," because, you know, what could go wrong with that? Obviously everything is not as it seems, and we find out Zimmerman's experiment is all about trapping evil spirits in human bodies. Again, what could go wrong? For a little taste of the horror, here's a few non-spoilery words from the story's ending: "I pray that none of you ever have to see the evil I have seen. I hope you all get to live in ignorance of what lies beyond the veil of what we can understand. It's here now. I can feel its black eyes burning into me just as I could all those years ago."

Disney World can get quite scary when its filled to the brim with tourists, but it'd be even creepier if it were totally abandoned. Attributed to author Slimebeast (Christopher Howard Wolf), the story tracks Wolf's supposed visit to a defunct jungle-themed Disney park in North Carolina called "Mowgli's Palace," which was razed after the local community raised concerns that it would disrupt their quiet residential area. Wolf ventures into the now-deserted park, and sees the phrase "Abandoned by Disney" scrawled everywhere, and he soon begins to hear conversations being whispered by guests who aren't actually there. He eventually goes a bit too far into the bowels of the park and finds a room with old decrepit Disney character costumes.

Why not keep the evil Disney train rolling? Creepypasta lore loves to take beloved animated characters and suggest that they went on adventures that are now banned for public consumption because they were just too screwed up for people to watch. One where Spongebob Squarepants character Squidward sits on the edge of his bed and cries tears is a notable one, and Candle Cove even hints at this kind of thing. But the granddaddy of the genre is Suicidemouse.avi, suggested that a part of a 1930s short that showed an early era Mickey Mouse strolling down a black-and-white city street while dissonant clanging music played, was cut from a home video release. Why? Well, it supposedly has mind-altering properties and watching it drove people to kill themselves.

This is a bit of a cheat since the general idea for this creepypasta has been on our radar for awhile now, as it will be the basis for the second season of Channel Zero. But, it's a whole different experience actually reading the creepypasta source material, so we will count it anyway.

The story has a definite "it could happen to you" vibe, and that's not just because it's about a guy who tries to make it through a legendary haunted house attraction to win $500. Each room gets progressively more terrifying (rooms with evil shadows; silent, vacuous voids; and improbably gigantic and possibly evil tree to name a few), and that is scary enough ... but doesn't compare with the ultimate haunted obstacle: a room in which he comes face to face with the Devil himself.

MORE FROM INVERSE:
Download
Calling all HuffPost superfans!
Sign up for membership to become a founding member and help shape HuffPost's next chapter
Join HuffPost
Voting Made Easy
Register to vote and apply for an absentee ballot today
Register now