This post is from Roads & Kingdoms' Five O'Clock Somewhere series: daily dispatches at cocktail hour from around the world. Find more food and travel storytelling at Roads & Kingdoms.

"Are you looking for something lighter or darker?" asks a twenty-something Vietnamese man from behind the bar. His name is "H" (like the letter, he tells me) and by the looks of him, H enjoys his beer. He doesn't have the traditional slender frame of his countrymen, but carries a slight paunch that's become increasingly prevalent as Western indulgences, such as craft beer, make their way into Vietnam.

H pours a few samples before I settle on one Saigon Saison from the Pasteur Street Brewing Company on the other side of town. After months of sipping nothing but watery lagers, it's a revelation, with tastes of black pepper and lemongrass that sound more like the ingredients of a local dish than an ale. This beer pulls it off beautifully though, and at 7.2 percent ABV it makes the perfect antidote for the palpable heat that blankets Saigon year round. Just like that, the rest of my afternoon has been decided; I'll be spending the foreseeable future perched on a barstool here at Bia Craft.

Saigon has long been a beer town. You can sit on the corner in tiny, plastic chairs and drink your fill without putting a dent in your wallet. But while the beer options did the trick, they didn't impress. That's all changed over the past couple of years, as a movement of microbreweries has taken hold across the city, spurred by expats, but fueled by both locals and westerners. Since it's opening in August, Bia Craft is the latest on the scene, with 10 hoppy offerings on tap and plenty more bottled imports from around the world. 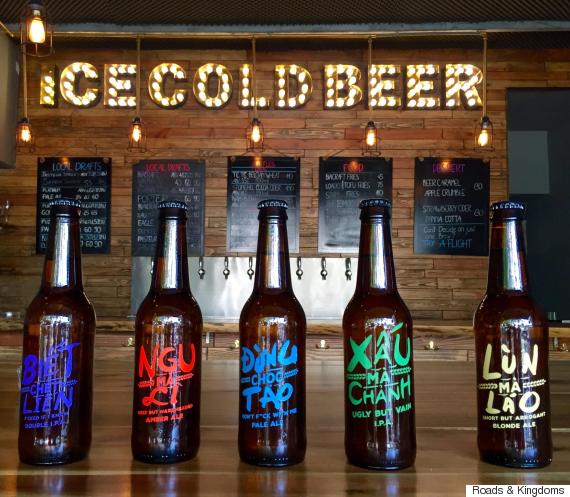 "Do you like Firestone IPA?" H asks. Hell yes, I like Firestone IPA. "This is the only place in Vietnam you'll find it," he beams. Like any good bartender, H is eager to talk about the product and explains that there's a bit of a learning curve when it comes to introducing the Vietnamese to these "bitter beers." Understandably, their transition from cheap, light lager to an artisan ale doesn't happen over night, which is why he typically starts them with something on the lighter side, like Bia Craft's homebrewed Lun Ma Lao (Short But Arrogant) Blonde Ale. It's also pricier than what the locals are used to, as the longtime go-to lager, Bia Saigon, costs around 10,000 Vietnamese Dong (VND) or less, not even 50 cents. A pint at Bia Craft can run up to VND 90,000. Of course, I'm more than happy to pay it, and as craft breweries continue to pop up around the city, it appears that so, too, are the Vietnamese.

The next day, I decide I better check out the Pasteur Street Brewing Company's headquarters, just to see how it stacks up. As it turns out, they recently released a Pumpkin Spice Ale for the holiday season. There's also a Jasmine IPA; that sounds interesting enough. Oh, and I have to try the Passionfruit Wheat Ale, the American bartender urges. Sounds kind of fruity, but better do what he says. Now, I've gotten pretty good at turning people down while in Vietnam; earlier in the day I flat-out rejected an adorable, pig-tailed little girl selling packs of chewing gum for the equivalent of 10 cents (and feel pretty shitty thinking about it while drinking $4 beers). But the point is, I oblige this overzealous bartender simply because the beer is that good.

Before I know it, the windows are dark, the floor is being mopped and another day is lost. Lucky for me, this innovative brewery is also responsible for introducing growlers to Saigon. Time to post up in a tiny, plastic chair on the corner.