Educators have the unique task of not only teaching concepts, but they must find new ways to make it relevant and engaging enough to capture the attention of their students. One way faculty members garner the attention of students, education experts and the media, is by creating courses and lesson plans around popular culture. Rutgers University received a substantial amount of attention when they launched their Women and Gender Studies course, Feminist Perspectives: Politicizing Beyoncé. Shows like Mad Men and The Wire are often used in college courses to explore issues like gender and socioeconomics.

Pop culture, and particularly television shows, can be excellent learning tools in the classroom. Comedies like Parks and Recreation will often take complex issues like gender roles in the workplace and oversimplify them. The oversimplification and sense of humor injected into these complex and heavy issues, can actually be quite helpful in the classroom. Students that feel less equipped or confident to enter the conversation about these issues are much more willing to contribute if they are able to do so in a way that is more of a discussion about the show and the characters.

While the goal of an educator is to work with their students to be able to engage in a meaningful dialogue about complex issues, this is an excellent first step in that direction.
The Parks and Recreation series includes enough episodes on gender roles and women's issues in the workplace that an entire course could be built around that. However, in this post I have selected five episodes that touch on a varying topics to show the many different ways an educator could use the show in their classroom. 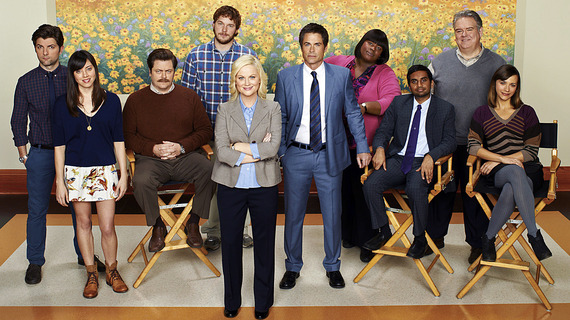 1. Episode: Sweet Sixteen (Season 4, ep. 16) | Lesson: Leadership and Balance
This episode is a perfect pairing in the classroom with Arianna Huffington's book, Thrive. The episode explores the issue of balance and burnout when the main character Leslie Knope is trying to be everything to everybody. She is running for city council while still trying to balance her work in the Parks and Recreation department. When she misses a colleagues birthday, she tries to make up for it by throwing him a surprise party. Over the course of the episode, Leslie realizes she is struggling with keeping up with all of her commitments. Probably the best part of the episode, and the best lesson, is when Leslie's boss Ron Swanson gives her some simple advice. He says, "Never half-ass two things, whole-ass one thing." It's a lesson that many young people need to hear, and an episode that is sure to drum up some thoughtful conversation about balance.

2. Episode: Pie Mary (Season 7, ep9) | Lesson: Gender Roles
Gender roles, particularly when it comes to issues related to equality in the workplace are important topics for young people to explore. In this episode, Leslie's husband Ben Wyatt is running for Congress and Leslie becomes the center of some unwanted media attention when she doesn't participate in a longstanding Pawnee tradition of baking pies with the other candidate's wives. Leslie is attacked for not valuing family, not being a good mother and for "silencing" her husband all because of her status as a successful working woman. Ben reacts to the critics by asking them why he is never asked about his kids or role as a father and husband. He does an excellent job of articulating the double standard his wife is under. It's all delivered with excellent comedic timing and opens the door for a great discussion about women, the workplace and the media.

3. Episode: The Pawnee-Eagleton Tip Off Classic (Season 6, ep3) | Lesson: Digital Privacy
This episode has some great clips to start a valuable conversation about digital technology and privacy (or lack thereof). While the main story of this episode is about the town's rivalry with neighboring town Eagleton, the secondary story is about Ron Swanson getting "off the grid." Ron's character places great value on privacy. When his assistant April shows him his home on Google maps he is determined to get off the grid. He enlists his two most social media savvy colleagues, Tom and Donna, to help him. The episode explores the various levels of comfort people have with sharing on social media and the clips serve as a great conversation starter about privacy in the digital age.

4. Episode: Pawnee Zoo (Season 2, ep1) | Lesson: Values
What happens when a deputy parks director hosts a small wedding ceremony for two penguins at the zoo? Normally nothing, but in this episode in turns out that Leslie married two male penguins. All of the sudden she has supporters on one side of her, an angry mob on the other side, and the media in front of her catching all of it as it unfolds. This dilemma puts Leslie in a unique position as she is encouraged to "pick a side" while also trying to stay mutual as a government official. The episode offers excellent opportunities to have a conversation with your students about values. It's important that we encourage are students to identify their values. However, the conversation does not stop there. We need to discuss the complexity of our values and how we are challenged on our values throughout life. It's a heavy topic, but this episode is a great tool to start the conversation and lighten the mood a bit to get students talking.

5. Episode: London Part 2 (Season 6, ep2) | Lesson: Leadership
Granted, leadership is a very broad topic with many facets as well as many theoretical constructs used in the classroom to understand it. One common theme that many of our student leaders, sport team captains and student volunteers experience is that feeling of their role being a thankless job. Leslie reaches a breaking point in this episode with the amount of work she pours into her job and the lack of gratitude she receives from the community. As much as we hate to admit it, we have all been in that dark place. Show this episode to your student leaders in school or on campus, and create a space to talk about the work they do as leaders. The episode has a great ending with some more thought provoking advice from Ron Swanson, and it is sure to resonate with your student leaders.

Using television shows as learning tools can be a captivating way to communicate a new concept in the classroom. Once you have the attention of your students, it makes it that much easier to engage them in meaningful conversations. What shows have you used in your classroom? How did it work and how did the students respond? I'd love to hear your thoughts and the ideas you've used! Please share by commenting on the post.