Five years ago, when my wife and I found out we were going to be parents, the first good, usable piece of parenting advice we received was this:

"Take all parenting advice with a grain of salt. Everyone thinks they're an expert. Use what you think is useful for you, in your situation, and just let the rest go."

And so we have. Some advice has hit home and made us better parents. The advice that we don't agree with, or doesn't fit, gets tossed out the window to roll away in the dust behind the minivan.

The problem is that no matter how many times we leave them behind, a few of the same annoying pieces keep chasing us down the highway. Here are five of them:

My girl can love pink and Disney Princesses and Tinker Bell if she damn well wants to. Sure, we tried to go with gender-less toys. We also tried going with toys marketed to both genders. We swore our baby girl wouldn't be covered in pink. We failed. She loves pink. She wants to be a princess. She wants to be a fairy. She wants to have tea parties. Yes, Batman is invited from time to time, but not nearly as often as Anna, Elsa, and Rapunzel.

Here's what I do instead. I try to find lessons from whatever she's into that empower her -- Tinker Bell, for instance. Do you know why she is called Tinker Bell? It is because she is a tinker fairy. A tinker fairy takes random parts from the environment, puts them together into a machine, and then uses her machines to make Fairy Hollow a better place. Yep, Tinker Bell is an engineer. Yesterday, while watching Secret of the Wings for the 43rd time, my daughter asked me, "Dad, what kind of fairy would you want to be?" There are also fast fairies, water fairies, plant fairies, etc.

"I would want to be a tinker fairy like Tinker Bell."

"Because Tinker Bell looks at things and doesn't just see what they are, she sees what they can become. I think that is really neat." 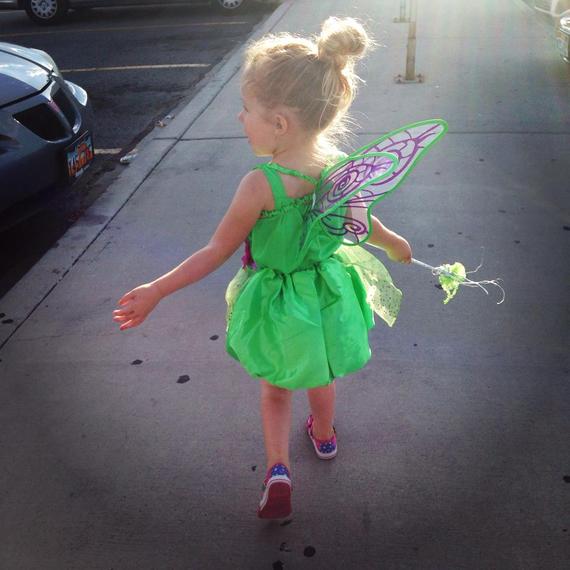 I can't control what she likes, but I can learn about it, be engaged in it, and, if I look hard enough, I can find lessons in anything. I imagine in a few years I will be doing the same thing with Teenage Mutant Ninja Turtles.

(Note: If either kid wants toys that are primarily marketed to the other gender, that is fine with me, too. It just isn't the way their individual tastes have panned out so far.)

2. Don't let them watch DVDs in the van.

This also comes in the form of, "Don't let them have handheld games, phones, or any screen time." It is usually accompanied by calls to engage them in the outside world while driving, because if they are busy watching The Lego Movie, then they are missing the grandeur of nature while simultaneously failing to develop cognitive skills for interpersonal communication! Instead of letting them play Letter Lab on the iPad, or watch Tangled on the overhead, I should really be playing "I spy" or "the license plate game" or "car colors" with them.

Look, when I am driving a two-ton minivan going 75 mph down an interstate highway in varying degrees of traffic, my focus is not on childhood development. My focus is on the road. I'm not running a preschool, I am driving a vehicle. When we get to the ocean or the national park, there will be plenty of time for nature walks and interesting facts about butterflies. If my wife is in the van, sure, we rotate activities. There are crayons and toys and games and song singing, but when the kids get sick of those after 5-10 minutes apiece, we're going to throw in Frozen. If a few hours of Frozen can keep them entertained while we drive the post-apocalyptic wasteland that is the road between Wendover and Reno, I'm perfectly fine with them not looking out the window.

I'm the cook in our family. I take great pride in creating amazing meals with fresh ingredients. When my daughter tells people that her favorite food is cherry tomatoes, a tinge of parental superiority grows a bit bigger in my belly. That is, until you ask my kid what her second favorite food is -- mini corn dogs.

Tucked in the freezer behind the back-up bin of frozen spinach, and the super fruits, is a giant box of frozen mini corn dogs. Next to the corn dogs is a box of chicken nuggets, which is hiding a box of frozen "fish" sticks. I'm done feeling guilty about them.

Our nights are on a pretty tight schedule. After I pick up the kids from day care, I have about a 45 minute window to have dinner ready by the time Stevie gets home. If anything delays me from the time I get off work to the time I get home and start chopping vegetables, that time comes out of dinner prep. I imagine this is a pretty typical situation for a lot of parents. So yeah, sometimes I grab a handful of mini corn dogs and toss them on a cookie sheet for the kids. Sometimes, if I am running really late, I stop by ::gasp:: McDonald's on the way home and grab dinner for them. It may not be optimal, but it is reality. You can stop telling me what I already know.

4. Control your kids in public.

OK, yes. You should control your kids in public. I don't mind this advice in general, as long as it is in this context: "You should make a consistent effort to keep your children under control and, when possible, not have a negative effect on the experiences of others in common spaces." That is good advice that, honestly, hasn't popped up much for us personally, but the one time it did was enough for it to make the list.

My problem with it comes when a stranger takes an unflattering snapshot of your life and then uses it as the perfect opportunity to deliver their advice in the wild -- and by the wild I mean the jelly aisle at Walmart.

"You should control your kid."

You're right. I should. Right now, I can't. No one can. I can sure try, and trust me, the fit my kid is currently having is bugging me a lot more than it is bugging you. Sure, your eardrums may be on the verge of rupturing from the infidecible screams emanating from my flailing 3-year-old -- screams that are so loud that I had to make up a new adjective that combines the words infinity and decibel. And sure, you'd really like to look at the assortment of jams and jellies behind which this temper tantrum is taking place. I get how frustrating it is. I really do. But do you know what factor is missing from your experience that exists in mine, making mine infinitely worse? You. Not only do I get to deal with my kid, her screaming and flailing, and my inability to select a jam of my choosing; I also get a nice thick layer of embarrassment on top of the chaos. Your eye rolls, annoyed gasping, and requests for me to "control my kid" do nothing to help.

See, here's the thing. My kid is under control 99 percent of the time. Really, she is quite adorable and well behaved. You just happen to be here during the 1 percent of the time that Mount Kidsuvius is erupting. I promise that she and I have regular talks about how people should behave. We do a healthy mix of positive reinforcement and consequences. Trust me, when I get her out of the store and in a more controllable environment, there are going to be consequences. But nothing you have contributed to the situation is going to help at all. Please just move on, keep your angry advice in your head, and buy your paper towels first. The jelly will still be here long after I have thrown my kid over my shoulder and carried her out of the store.

Older parents and grandparents like to say this one when you're feeling overwhelmed. It is always with good intentions, and I don't fault them for saying it. I just keep finding myself thinking that sure, some things seem to get easier, but they are quickly replaced by other, more difficult things. Kids aren't a continuum that starts at suck and ends at better. What is awesome about newborns will be replaced with something that is awesome about toddlers -- same for the suck.

My suspicion is that there will always be awesome and there will always be suck, and waiting on "easier" is a fool's errand. Easier is never going to come. I'm not waiting for easier. I'll take the good with the bad, not out of some hope that eventually one will outweigh the other, but with the understanding that parenting, like everything else in life, is lived in the aggregate of all of our good and bad experiences. Toddler fits in the supermarket will eventually become slammed doors and early curfews. It is never going to get easier, it is just going to get... different.

So there you go. I know. I know. Making a list of the advice that annoys me isn't going to make that advice go away. And really, it isn't all bad advice. Who knows, maybe someday it will get through to me, and I will look back at myself and think I was silly for writing this list. Until then, I'm just going to keep doing my best to find love in the chaos -- even if that chaos is full of pink fairies, Happy Meals, endless road trips with Frozen on repeat, and the occasional public fit.

What advice are you sick of? Let me know in the comments. Or, come find me on Facebook. I'll keep some mini corn dogs warm for you!

Baby Photobombs
More:
Parentsparenting adviceparents-dads
Newsletter Sign Up
Raise the kind of person you'd like to know
Subscribe to our parenting newsletter.
Successfully Subscribed!
Realness delivered to your inbox