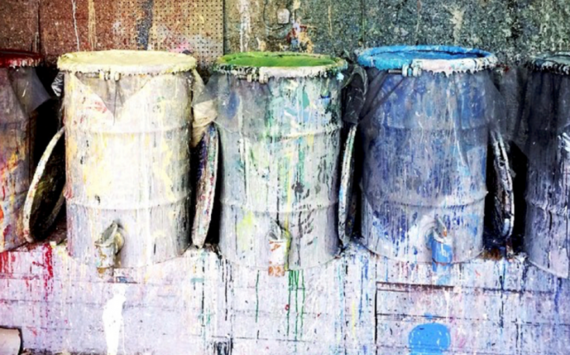 It's been 10 years since Hurricane Katrina made landfall, taking the lives of 1,500 people and destroying countless homes, churches, businesses, and schools. The people of New Orleans have spent a decade rebuilding their city, but not everyone has felt the full impact of the recovery effort. A recent survey revealed a stark racial divide in how residents perceive improvements to infrastructure and their standard of living. But don't be too discouraged: We found five green innovations that have taken root since the storm and that are improving the lives of citizens across the board.

1. OysterBreak
The world is your oyster. At least it is for Tyler Ortego, Matt Campbell, and two professors at Louisiana State University, who invented the OysterBreak system in 2005 and brought coastal protection to life, literally. The system, which is essentially a chain of huge linked concrete cylinders, is made of an oyster-growing substrate that, once installed, is colonized by oyster larvae and eventually grows into a living reef. Because these solid reefs grow faster than sea levels rise, they reduce shoreline erosion. ORA Estuaries, the company that Ortego founded in 2010 to run the building and distribution of the oyster reefs, recently won The Big Idea pitch competition at the 2015 New Orleans Entrepreneur Week. As of yet, the oysters can't be eaten, but Ortego is working on engineering the reefs to double as a sustainable food source.

2. Public Lab
New Orleans residents are bringing DIY to environmental protection. Powered by civic engagement, Public Lab is a nonprofit network of locals who are working to make sophisticated environmental monitoring tools accessible to the general public. They cover everything from water quality evaluation to aerial mapping, coming up with innovative ways to make complex monitoring devices out of inexpensive materials. Travis Haas, an environmental science teacher at the New Orleans Center for Creative Arts, and his eleventh grade students recently collaborated with Public Lab to map and assess the progress of wetland restoration. Acting as citizen scientists, the high schoolers launched a helium balloon attached to a camera and used Public Lab's MapKnitter software to piece together the photographs it collected.

3. The Green Project
New Orleans residents say that Hurricane Katrina created 20 years of waste in a single day. True or not, the disaster left the city sitting on over 55 million tons of debris. Enter The Green Project. Founded in 1994 as a paint-recycling business, the New Orleans-based nonprofit stepped up after Katrina, taking materials from destroyed homes and reinvesting them into community rebuilding projects. Ten years later, The Green Project is thriving. The project promotes creative repurposing and prides itself on being accessible to all populations--materials are sold to community members at one-fifth of new retail costs. It also has the only paint-recycling program in the Gulf region and leads regular community recycling education workshops. We agree, it's pretty much the whole package.

4. Water Wise
It wouldn't be New Orleans without stormwater management. In 2013, Global Green USA launched its Water Wise NOLA program in New Orleans to advocate for simple solutions to water-related issues, such as flooding and substandard water quality. The organization is working to help residents lower their water bills by reducing consumption and promoting rainwater management. And they host regular rain-barrel builds--does it get better than that?

5. Eco-Friendly Transportation
Don't worry; the city government is making an effort to green-ify New Orleans, too. After Hurricane Katrina devastated the city's public transportation system in 2005, the Regional Transit Authority was tasked with a massive reconstruction project. Although the bus service is still operating at 35% of pre-Katrina levels, the RTA has made progress. Today, the transit network's entire fleet is run on biodiesel and sixteen of their buses are biodiesel/electric hybrids. The city has also made pedestrian-friendly improvements to its streetlights. Since 2014, over 4,000 of them have been replaced with energy-efficient LED lights as part of the city's ongoing Energy Smart Streetlight Conversion Program. We'd call that a step toward a brighter future.