If you live here, you have felt it. Perhaps you've thought, "I have been standing on this platform/bus stop for half of my life. Why? Someone must hate me." The answer is... someone does hate you. It's Chicago Transit Authority. If you live in Chicago and have felt the keen sting of CTA's loathing, then read on and perhaps find some small comfort in the fact that you are not alone.

Any true Chicagoan knows that this must be the first item on this list. If you need to see proof that CTA hates us, you need look no further than Ventra. CTA inflicting Ventra on us was, for all intents and purposes, an unprovoked attack. No one hated the old system: No one was tweeting @cta railing against the Chicago Card. No one was creating parody accounts mocking the absolutely absurd functionality of the Chicago Card. The old system worked... and then along came Ventra. From bank cards being charged in addition to the Ventra card, to inexplicably nonfunctional cards, to a completely and utterly mystifying account interface online, to fundamentally clueless Customer Care employees, to hour-long hotline waits, and oh, let's not forget the fact that you are instructed to pay cash when your already-paid-for Ventra card doesn't work on their worthless scanner... Ventra has been (and continues to be) a nightmare. Every single day the line to board the bus is at a standstill while each person must tap their card three to four times before it's actually read. Meanwhile:

Oh, of course. We're being double-charged when we're forced to double-tap. Of course.

Even worse: Ventra and CTA continue to pretend we're all crazy for not liking the new system. See this lovely exchange on Twitter: 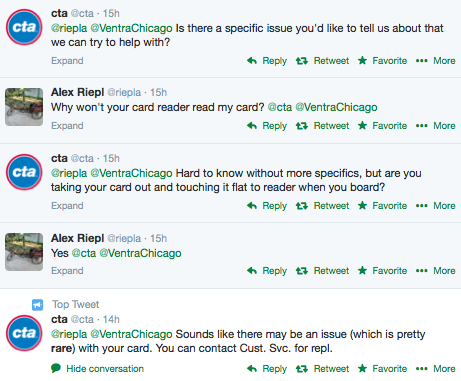 "Which is pretty rare?"

Yeah. Right. You're not fooling anyone.

Bus bunching is, to the CTA, like the common cold. It seems like such a simple thing, but the CTA cannot -- I repeat, cannot -- find a cure. Like most Chicagoans, I waste precious time every day of my mortal life waiting. Just waiting. Staring at potholes that will never be fixed, and waiting. I live on the near South Side and catch the 29 every day, a bus which is always full of people trying to get to work and kids trying to get to school. But at any given time while trying to catch the 29, there is a 20- to 30-minute wait. But it's more than just a long, empty window. It's the fact that at the end of that long, empty window... two or three buses come all at once.

I have many questions for CTA, but here's one: What good does three buses all at once do anyone? Great, the 30 people now crowded on the bus stop can now get on multiple buses. But now there are three buses all in a row at every bus stop until Congress: Traffic is congested, streets are blocked, people are pissed. Why not just have the buses come every eight minutes? Like they're supposed to? What is happening at your depots where every... single... day this occurs? It happened when I lived on the North Side too: the 147, the 151. North Siders, you hear me. Bus bunching is a blight. But CTA doesn't care. Which leads me to my next point.

I'm not even talking about Ventra, because everyone knows that the dunces they have working at Ventra are a bunch of salespeople trying to convince you to use your Ventra card as a credit card too -- yay corporations interfering with civil life! -- and maybe attempt (attempt) to troubleshoot your nonfunctional, worthless plastic Ventra card. I'm talking about CTA. Never have I encountered more apathetic, defensive, blame-shifting grunts in my entire life. Here's the conversation I had this morning after calling to complain about bus bunching:

Here's a screenshot of my phone: 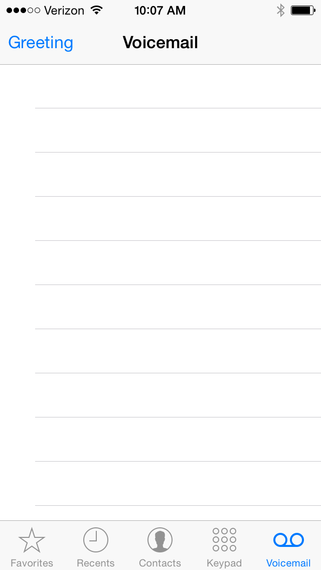 Guess what, CTA? No, a manager never called me back. No, they didn't leave a voicemail. See? My voicemail box is empty. So what are we supposed to do when we have a complaint or a grievance against CTA? Well, some people might take to social media, but CTA's Twitter often seems to be run by what appears to be a petulant teenager. See, the Twitter account runs fine when they're just reporting outages, service disruption, etc. But when they actually have to interact with customers who are complaining? They take the apathy you experience when you call them on the phone and add a pinch of defensiveness and a sprinkle of subtle sarcasm. Tweet at them. You'll see. If you like being treated with contempt and thinly-veiled indifference, tweeting at @cta is the hobby for you.

I have been told a story by different people a few times in my lifetime: a story about public transportation in Japan and how there are guys that stand on the platforms with sticks to shove people into the subways to fit more people into the crowded cars. People always tell this story with a kind of amused awe: "can you believe they do that over there?" and no one ever really knows if that little tidbit is true or not. But this story always annoys me, for two reasons. 1) It's racist. "Oooh, look how weird and intense Japanese people are!" and 2) Do you really think that is not your life here? Okay, there are no people with sticks shoving people into train cars, but every day riding a bus or a train in Chicago during rush hour (and often outside of rush hour) is like transforming into a heifer for thirty minutes of my life. It might as well be a mosh pit. A combination of delayed trains/buses, route cuts, and not enough actual vehicles in the city creates the cattle car effect: People are smashed against one another. So forget riding CTA if you're claustrophobic in any way, but cattle cars lead to other problems too.

Sexual harassment. Violence. Theft. I can't tell you how many men I've witnessed/experienced taking advantage of the tight train situation in order to cop a feel. Same with people taking stuff from people's purses, pockets, backpacks. And as for violence: Wwell, people get pretty testy when they're forced to be pressed against a stranger's usually-odorous body for long periods of time. "Waiting for signal clearance" -- those dreaded words -- means you're not even making any progress in your trip: you're just cuddled (standing) with a stranger for no reason. Tempers flare. Fights erupt. It happens all the time.

But does CTA care? Who do you call when you've just been crammed into a train car for 45 minutes, had your ass groped, and your wallet stolen? CTA? Ha. You must have already forgotten #3 on this list. Go back and reread that. Short answer: They... don't... care.

No, I don't mean that they won't make change if you're paying cash. (Which, speaking of cash: you're out of luck. Ventra wants to be credit card dependent. And your fare increases if you don't use Ventra and continue to pay cash.) What I mean is that nothing has changed. Unlike anything else, where there are complaints, outcry, protests against a company and apologies are made, processes are tweaked, Ventra and CTA just dig in. One of the complaints about Ventra (mentioned above) is that, unlike the old system, you can't tap your wallet in order to scan your Ventra card without your bank cards also being charged. This complaint has been made since the initial roll out, with Ventra reps promising to look into the problem. But now, this is what you get as response when you ask Ventra about it:

They have no intention of making a change: not about Ventra and not about anything else. The onus is on Chicagoans, like it is for everything else, and the ripples of CTA's ineptitude extend beyond delays. The fact of the matter is, that CTA's refusal to find solutions for the problems they are charged with creating every single day in Chicago leads to things more problematic than delays. Kids can't get to school on time. Adults can't get to work on time. The elderly and disabled are forced to wait (often at stops without benches, and often in bad weather) for up to 40 minutes in some parts of the city. Groping and sexual harassment increase. Theft increases. Anger increases.

You see, what CTA doesn't realize is that their behavior doesn't just mean a bad train ride. It means a bad start to the day. Take one look at the Twitter account @ctafails and you can see the negativity that begins from the moment Chicagoans step onto the bus stop in the morning, which is then reanimated when they're trying to return home at night. The CTA website reports that on an average weekday, 1.6 million rides are taken on Chicago public transportation. When you fail even a fraction of those customers, interrupting their days, ruining their commute, making them late to work, what does it mean for the morale of a city? This makes me think of an article I read recently on Salon, "The Troubling Reasons Americans Are So Depressed." In it, the author discusses "learned helplessness" and how Americans, due to corporations and call center hold times (among other things) are becoming depressed and angry because of the amount of our lives we spend waiting on hold, waiting in line, and (I add)... waiting for buses. The helplessness, the author says, is the helplessness of those who are resigned to the indifference of the institutions we depend on.

What else can we do? I'm not sure. Rant in blogs like this? Perhaps. I see the helplessness that the Salon author examines in his article. I feel it. What do you do when the buses won't come and you're late to work and you can't afford a cab and you call customer service and if someone answers (if they answer) they don't care and no one ever calls you back and nothing ever changes?

It's funny... the CTA Twitter account recently tweeted this article: Public Transportation Shapes Where Millennials Decide to Live, where I found this stat: "54 percent of the participants said they would consider moving to another city if it had more and better options for getting around."