Most people are aware of the drastic impacts of Climate Change in the atmosphere. Fewer people know what is happening beneath the surface of the oceans on coral reefs, the "rainforests of tropical oceans." Reefs are vital to maintaining life in the oceans and on our planet, and Climate Change is killing them. In the run up to the Paris Climate talks, I interviewed Dr. Emily Darling, a conservation scientist at the Wildlife Conservation Society. She leads the Indo-Pacific Coral Collaboration, a collaborative project between more than 100 scientists around the world to provide a contemporary snapshot of coral biodiversity and identify portfolios of actions for climate adaptation and conservation.

Climate change is a horror story for coral reefs. Scientists estimate that 75 percent of world's coral reefs are in danger of dying out -- the loss of coral reefs would have natural, economic and cultural consequences. To me, that is just not acceptable. Corals have to keep pace with rising sea levels, adapt to a more acidic ocean that can dissolve their carbonate skeletons, and cope with warming oceans and marine heat waves that trigger mass coral bleaching. Rising sea levels and ocean acidification are largely future concerns, but ocean warming is happening right now.

This year, corals are in the midst of a global bleaching event that has already bleached corals in Hawaii and the Caribbean. The US National Oceanographic and Atmospheric Administration (NOAA) estimates that this bleaching event could affect more than a third of the world's coral reefs and kill more than 12,000 km2 of them. Bleaching can also make corals more vulnerable to disease. Other pressures like overfishing and pollution only add to the problems.

The impacts of climate change on the world's oceans are unprecedented. Our children and grandchildren may not see coral reefs like we see today. 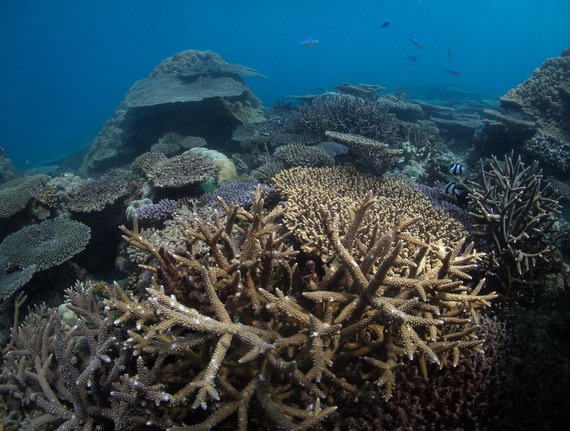 Question: What would the loss of coral reefs mean for humankind?

Coral reefs are vital to the natural wealth of our planet - they cover less than 1% of the oceans yet are home to more than 25% of all fish species! Millions of fish, invertebrates and other creatures rely on coral reefs for food and shelter. This natural wonder, beauty and integrity of coral reefs provides global goods and services worth at least US$30 billion per year, and supports at least 500 million people worldwide through fishing and tourism. Coral reefs also provide natural barriers and protection from storms and tsunamis for hundreds of millions of people who live near tropical coastlines, and for indigenous peoples who have cultural practices involving coral reefs that go back thousands of years.

Question: Are all reefs doomed to die? If not, what can be done to save them?

Yes -- coral reefs will survive, but whether they are healthy and functioning ecosystems, or crumbling and algae-covered remnants depends on our actions.

We are in the midst of a human experiment -- hundreds, thousands of reefs around the world are being bleached by marine heatwaves or fished with dynamite and explosives, but other reefs are managed sustainably or within no-take marine reserves that protect fishes and coral habitats. Still other reefs exist in what we are discovering to be "climate refuges" -- areas that have escaped the worst impacts of climate change. In the northern Mozambique channel and the Raja Ampat archipelago in Indonesia, for instance, deep coral canyons, upwelling and strong ocean gyres and eddies bring colder waters that have allowed fragile corals to escape bleaching.

Over the last two years, I have worked with over 100 scientists around the world to bring together the first picture of coral biodiversity throughout the Indian and Pacific Oceans. Our goal has been to find hotspots of coral biodiversity, and also 'cool spots' of potential climate refuge. Our efforts are revealing some surprising responses to climate change.

First, there are reefs that still contain remarkable biodiversity -- of species, ecological function and evolutionary history. These reefs are the Noah's Ark for future coral reefs, and we need to work hard to protect them. Second, some reefs have greater diversity than we would expect given their exposure to climate change. Investigating how these reefs have survived might lead to important breakthroughs, such as scientists experimenting with 'supercorals' or genetically engineering heat-tolerant strains of corals or the tiny zooxanthellate algae that corals co-exist with. Overall, scientists are learning from the ongoing human experiment on coral reefs. We are finding new evidence and new stories that can guide research and investments to buy time for coral reef survival.

Question: How is the issue of coral reef conservation being addressed in the Paris climate talks?

Many coral reef experts are attending the Paris climate talks. They are working with developed and developing countries to tell the story of coral reefs and why we must limit our global carbon emissions. In a scientific consensus statement, the International Society for Reef Studies (ISRS) has called on all nations and negotiators at the Paris Climate Change Conference to commit to limiting atmospheric carbon dioxide (CO2) concentrations to no more than 450 ppm in the short-term, and reducing them to 350ppm in the long-term. In short, coral reefs need a global commitment to limit global temperatures as low as possible, to avoid a biological catastrophe. For coral reefs, 'keeping it in the ground' is the only viable strategy for future fossil fuels.

The effect of climate change on coral reefs is also an issue of social justice. There are millions of people in the global south whose livelihoods, food security and culture depend on coral reefs -- their economies did not create the climate crisis, nor will they benefit from continued dependence on fossil fuels in the long run. For example, a Paris commitment to invest in green energy solutions for developing countries would help protect coral reefs and reef-dependent local economies.

To help, you can read the ISRS consensus statement and sign the petition to build the momentum to save coral reefs at the Paris climate talks.

Question: What else can the average citizen do to help coral reefs?

You can make sustainable choices when you travel. For example, you can support eco-friendly or sustainable businesses that don't pump their sewage onto their reefs, that don't clear cut mangrove forests or dredge reefs, and that work with local stakeholders to manage their reefs and natural resources. Seafood guides like Monterey Bay Aquarium Seafood Watch can also help you choose seafood that's fished or farmed with less impact on the environment.

In our daily lives we can support and push our politicians to act on climate change and transform our energy system with strong policies. We can make our own decisions to fly less, drive less and waste less We can also donate to organizations that are working to support coral reefs through local on-the-ground programs and global political action.

To find out what is happening in ocean conservation around the world and hear the latest about what WCS is doing to protect coral reefs, visit: www.wcs.org/marine

Like all wicked environmental challenges, there is no single silver bullet solution to help coral reefs. But there are many tangible actions that we can all take collectively for a more sustainable planet and to protect intact coral reefs into the future. 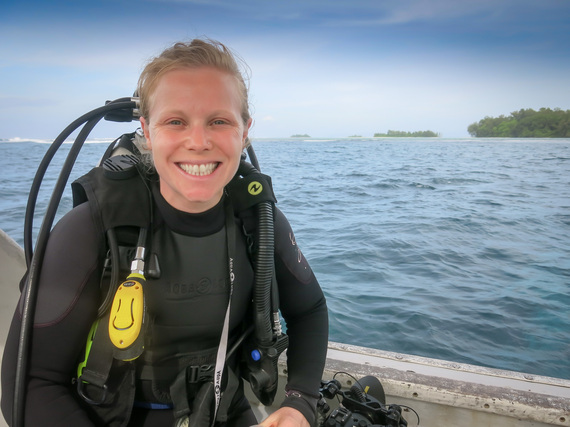 Dr Emily Darling is a conservation scientist at the Wildlife Conservation Society and has been studying coral reefs for the past 10 years. In addition to her work on coral reefs and climate change, Dr. Darling also leads a global coral reef fisheries monitoring program that works with local stakeholders and international partners in Fiji, Solomon Islands, Papua New Guinea, Kenya, Madagascar, Indonesia and the Caribbean to find sustainable management solutions that are locally relevant and culturally meaningful. Her research has been supported by a David H. Smith Conservation Research Fellowship from the Society for Conservation Biology and the Cedar Tree Foundation, and the John D. and Catherine T. MacArthur Foundation. Follow her on Twitter (@emilysdarling) or learn more at her website, www.emilysdarling.com.

Tim Ward is the author of The Master Communicator's Handbook