"Climate Change will have a bigger impact on your family, friends and all humanity than the Internet," begins Dr. Joseph Romm's new book, Climate Change: What Everyone Needs to Know (Oxford University Press). Romm is the founding editor of the blog Climate Progress. For me, his blog has been the best available source of climate-change news for several years. Romm is also science advisor to the Emmy award-winning series on climate change, "Years of Living Dangerously." I met Romm in Paris at the closing days of the Climate Summit, and interviewed him about his new book:

Question 1: Joe, why do you think it's important for the average citizen to be informed about climate change?

Answer: Imagine if you knew a quarter-century ago how information technology and the Internet were going to revolutionize so many aspects of life. Imagine how valuable that knowledge would have been to you and your family.

We have such advanced knowledge of how climate change will play out over the next quarter-century and beyond. Those who have that knowledge will do vastly better in the world that humanity is remaking than those who do not. Those who read the book will be the smart money, rather than the other kind.

You need to know about accelerating sea level rise if your family owns or plans to own coastal property -- because a crash in property values is foreseeable today. Similarly, you need to know about climate change if you or a family member is planning to retire someplace currently warm and desirable. Carbon pollution is poised to make such places hot and undesirable.

People need to know about climate change because who else is going to make key life-changing decision for them and their family, decisions will that will increasingly depend on such knowledge

Question 2: The book has just been published at the time of the Paris Climate deal. What does your book have to say about global cooperation on climate change that this new climate agreement will put into action?

Answer: The book examines one of the key factors that enabled this global deal - the commitments made by essentially all of the world's countries to restrict their carbon pollution.

The key breakthrough that enabled the Paris Agreement occurred in November 2014, when the world's largest polluter, China, announced a deal with the United States whereby China would peak in carbon dioxide emissions by 2030. In that deal, the United States committed to cut greenhouse gases 26%-28% below 2005 levels by 2025. A few weeks earlier, the entire European Union had pledged to cut total emissions 40% below 1990 levels by 2030. So, by the end of 2014, countries representing more than half of all emissions worldwide had made serious commitments to limit global warming pollution.

The U.S.-China deal was the first time any major developing country - let alone the biggest emitter in the world - had agreed to curtail CO2 emissions. It helped trigger a cascade of commitments from countries like Brazil, Indonesia, South Korea, and Mexico, which were crucial to the Paris deal. Ultimately more than 180 countries worldwide made serious commitments before the Paris talks. 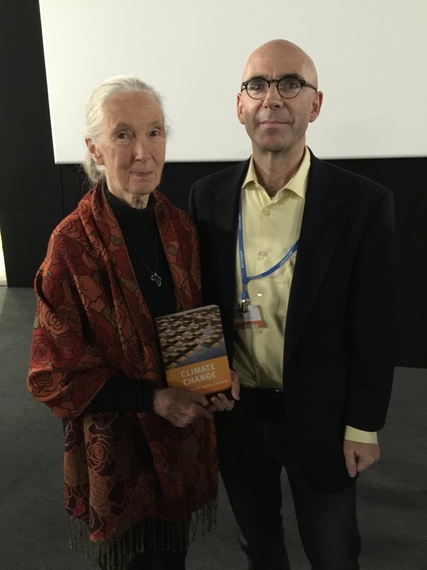 Joseph Romm with Jane Goodall at the Paris Climate Summit.

Question 3: Can technology plus policy solve the problem of climate change, or will people have to significantly change their lifestyles?

Answer: The book examines the clean energy revolution that has led to exponential growth in solar power, wind energy, batteries, electric cars, and many other key clean technologies. The basic conclusion is that for the next couple of decades, the nation and the world can make deep and steady reductions in carbon pollution without significantly changing our lifestyles.

That said, our quarter-century of dawdling on climate action means we face impacts that will drive lifestyle change. Indeed, without far more aggressive efforts to slash carbon pollution, climate change will likely cause the world will lose one third of its most arable land to near-permanent drought and Dust-Bowlification post-2050. At the same time, ocean acidification and rising saltwater infiltration of rich agricultural deltas will threaten more sources of food.

In such a ruined climate, we still have to figure out how to feed another 3 billion people. There is unlikely to be sufficient arable land and fresh water available to sustain all those people on a Western meat-intensive diet, which, in any case, is not terribly healthy. Some combination of rising food prices and government policy and societal pressure to avoid mass starvation could well bring about significant dietary change.

Question 4: Your work with the TV series "Years of Living Dangerously" continues with a new season in 2016." How does this show inform people about Climate Change?

Answer: "Years of Living Dangerously" is gripping, visually sweeping, narrative-driven television, which won the 2014 Emmy for outstanding nonfiction series. We focus on finding the personal and local element in every story - how climate change and the race for solutions affects everyday people. At the same time, as chief science advisor, I work to ensure the stories are science-based and accurate.

I'm very excited that National Geographic Channel is going to air Season 2 of "Years." The channel is carried in 90 million U.S. households as compared to 23 million for Showtime, the distributor of Season 1 (which can now be streamed on Netflix). It is also carried in 430 million households worldwide, broadcasting in 171 countries and 45 languages.

One key innovation in the show was the use of celebrities as correspondents, along with journalists like Tom Friedman. David Letterman, Cecily Strong, and The Daily Show's Aasif Mandvi will be joining Season 1 correspondents, Arnold Schwarzenegger, Ian Somerhalder, and Olivia Munn.

The ultimate goal is to go beyond informing people. We're working to support and advance the growing national conversation on the most important news story of our time, climate change, while empowering people to pursue a range of solutions.

Question 5: Do you think climate change will be an election issue in 2016?

Answer: The outcome of the 2016 election will be highly consequential for the national and global effort to avert catastrophic climate change. It is critical that we elect a president who supports the EPA's Clean Power Plan and the Paris Agreement. Since Congress is unable and unwilling to tackle the climate problem, the CPP is critical to the country's efforts to reduce carbon pollution domestically. At the same time, the CPP is the cornerstone of the U.S. pledge that make the 2014 deal with China possible and that forms the basis of our contribution to the Paris Agreement.

So climate change is an election issue. But who will raise it vigorously for voters? In theory, the media could, but in recent elections they have generally chosen not to press candidates on the story of the century.

At the same time national Republicans now realize that their denial and intransigence is a losing political position, as a growing number of Americans demand action on human-caused climate change and embrace clean energy solutions.

So for it to become a major issue of public debate, it will be primarily up to the Democratic candidate to make that happen by raising the issue in speeches, ads, and debates.

Joseph Romm is founding editor of ClimateProgress.org, which New York Times columnist Tom Friedman called the "indispensable blog." Romm is a senior fellow at American Progress, is a former acting assistant secretary of energy for energy efficiency and renewable energy, and holds a Ph.D. in physics from M.I.T. He is author of the new guidebook, Climate Change: What Everyone Needs to Know available at amazon.com

Tim Ward is the author of The Master Communicator's Handbook, a guidebook for thought leaders and change maker. See: "Communication: It's not about output, it's about impact!"/a>.