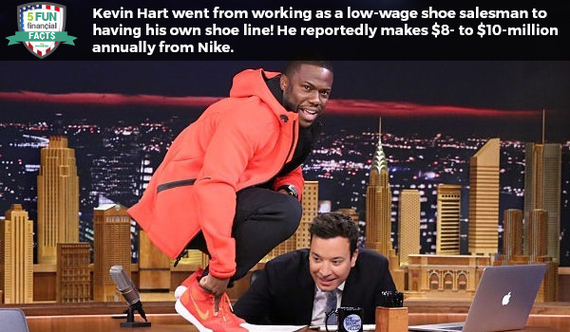 1. Kevin Hart went from working as a low-wage shoe salesman to having his own shoe line! He reportedly makes $8- to $10-million annually from Nike.


3. Since 2011, Hart has made more than $100 million in endorsement deals from corporate titans such as eBay, Samsung and Hyundai.

4. Hart has a big heart. The Philly native donated $250,000 to the Philadelphia school systems to buy students new computers.


5. Due to his dedicated Twitter following of nearly 30 million, a movie studio reportedly paid him $2 million just to tweet about 2 movies.

This article was provided by our partners at moneytips.com.