City sustainability reporting is a hot trend. It is essential to climate action because cities are a powerful lever for enacting constructive changes. Warsaw's most recent example illustrates a readily adoptable approach (press release, executive summary, and full report available here in English and in Polish): namely, the city coordinated with academia and the private sector to produce the report.

Graduate students Joanna Gajda, Alicja Marcinek, Magdalena Obłoza, Magda Skrocka-Kołodziejska, and Joanna Wakulińska completed a majority of the work while studying corporate social responsibility at Collegium Civitas with Liliana Anam, founder and manager of CSRInfo. They worked with a team at Warsaw City Hall led by Director of Infrastructure Leszek Drogosz to research, condense, format, and verify data about material concerns of residents. Magdalena Kraszewska of Collegium Civitas and the Warsaw University of Life Sciences helped coordinate the project.

The advantage of working with a team from academia is that they function semi-independently, lending a greater degree of objectivity and therefore credibility. The students also helped, based on survey data and open public forums, to determine what matters to residents and other stakeholders.

Some of the biggest areas of sustainability progress related to climate change include greater levels of recycling, increasing Veturilo bike share usage, and the completion and operation of a second Metro line. 25% of Warsaw continues to be green space, its electricity generation and water treatment facilities both operate more efficiently than many counterparts in other countries, and over 80% of Varsovians are satisfied with their lives in the city. 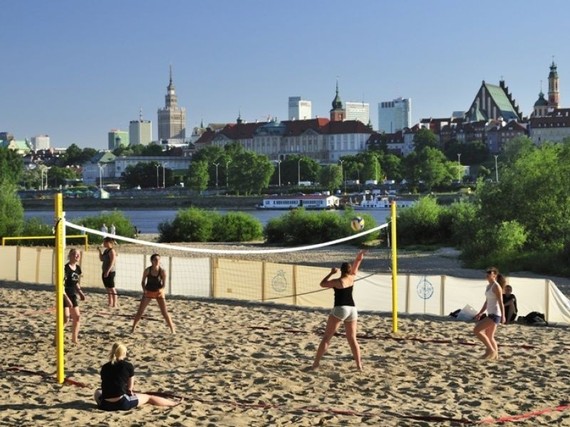 Beach volleyball on the shores of the Vistula River - courtesy of the City of Warsaw.

This edition of the report also illustrates the practice of cross-referencing two standards. The team utilized both the most widely adopted guidelines in the business world, the G4 standard of the Global Reporting Initiative (GRI), plus the more recently published ISO37120:2014 standard for reporting on the sustainable development and quality of life of cities.

More information, including quotes on motivations and advantages of Warsaw's approach, are available here.