This week's inaugural C-Suite Conference was the most blatant example of what profitable, successful networkers do compared to those who struggle to get connected. If the cocktail parties, hallway conversations, coffee breaks and after-events were recorded, it would be obvious to see exactly how to approach networking with ease, sophistication and authenticity. Recording didn't (and shouldn't!) happen so I'll share some highlights of the experience for you.

If you haven't heard of the C-Suite conference, it is an invitation-only networking and learning experience reserved for C-Suite executives running companies over $10 Million and fast-growing entrepreneurs who are contributing in a relevant way to a better business environment. It was the led by Jeffrey Hayzlett, host of C-Suite TV on Bloomberg Television and who, last week, was named #2 on the list of the world's top social marketing talent by Forbes. The event ran Sunday, May 4th to Tuesday, May 7th. It also marked the launch of a private, online portal for C-Suite executives to communicate with each other away from the noise of typical social media channels.

Here are some takeaways to help you elevate your networking results:

1. Set the tone for connecting.
The first secret to a successful networking conference is the responsibility of organizers. It's important to provide an atmosphere that makes attendees feel comfortable connecting. There were no apparent cliques at C-Suite, likely because it's a new event. Most conferences have inadvertently created an "us" versus "them" vibe that essentially kills the networking opportunity except for those on the inner circle.
The C-Suite leadership actively mingled with almost every one of the 350 attendees. It was as if you were attending a house party and the hosts and sponsors were open to talking with everyone. The expectation of networking was set in advance via email communication and the invitation. There was a lot of stage time (which provides no networking opportunity) so it was important for people to maximize connecting during the breaks and cocktail parties.

2. Deepen Conversations
After attending 241 business events in one year (don't do that!) I became quite frustrated with the superficial level of conversation that the average business event invites. Many conversations at C-Suite deepened very quickly into something that was more relevant and interesting. All exchanges begin with small talk, but this group had the personal confidence and genuine interest to take the responsibility to deepen conversations more quickly than most.

3. Let Go of Pressure and Your Hidden Agenda
At no time did I feel anyone was facing a pressure-cooker situation with their biz and yet, by nature of who was in the room, every person has stress and would have had at least one fire burning at the office. Perhaps by the time you get to the C-Suite you have a pretty good game face. Many commented that they had barely checked their email and while some had to excuse themselves for previously planned meetings, the atmosphere was very much "be in the present". That mindset allowed for an authentic and engaging networking experience. The general focus was one of finding solutions and mutual benefit, rather than perseverating on inward, negative issues. 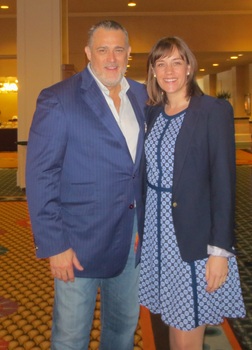 Jeffrey Hayzlett & me at the inaugural C-Suite Conference

4. Spend Time with Like-Minded People
Since attendees were hand-picked by the organizing advisory board, there was a sense of 'friendship by association' feeling. That's not usually how events work, but by choosing events that collect like-minded individuals in your community you can align yourself to find better and more authentic connections. Common denominators provide the spring board to start a relationship, while having common contacts and interests provide a jumpstart in the long process to develop trust. The best way to find those events is to ask your five favorite clients where they spend their time. Can't find the right event in your marketplace? Take a page out of Jeffrey Hayzlett's C-Suite initiative and create your own.

5. Connect First, Sell Second
There wasn't a sense that people were there to sell their wares. That said everyone was happy to clearly articulate what they do for a living. After making a connection, people shared their needs and continued the dialogue if they wanted to explore mutual benefits. It was so refreshing to have three days of networking and not have one person shove a brochure in my face or launch into an elaborate, undesired elevator pitch!

Contrast that to the last hour of the conference when I experienced networking whiplash! A small business owner snuck in to hear a friend speak from stage. We shared a 2 minute conversation and next thing I knew I had two mini-book brochures and a bookmark weighing down my purse, but not a legitimate business card.

She was carrying a dozen (literally) different swag books that she had co-authored ready to hand out at random. It was such a stark contrast to the heavenly approach of 99 per cent of C-Suite executives in the room. I don't blame her for her approach. This is exactly the kind of tactic that is taught by countless "networking experts" (ironically, one of her mini-books was on networking!). Unfortunately, it backfires because it confuses selling with networking. The more experienced or high-net worth an individual is, the less this shove-your-wares and hope I'll buy method works.

Business events happen every day across the globe and very few achieve the level of ease, sophistication and authenticity of connecting that was achieved from Sunday night to Tuesday afternoon at the Fairmont Dallas, Texas.

Think of your last networking event. Are you a whiplash, jump-the-gun, sell-your-wares kind of networker or do you display the ease and sophistication that is the secret to successful professional relationship building? That's the difference between profitable networking and just being busy, pushing your product and collecting cards!

From Business Cards to Business Relationships: Personal Branding and Profitable Networking Made Easy
by Allison Graham