I've always had dogs. My earliest memories are of cold noses, soft grey Dumbo-size ears and slobber. Lady and Chief were Weimaraners, a mother and her pup. They were loving, sweet and to toddler me, giant protectors. Whenever I'd do something bad that deserved a spanking, they would stand between me and my parents and growl. I wish they were around now. I'd take them to yoga and to the doctor and to every comedy show I'm invited to on Facebook. They could do down dog with me, stop the doctor from requesting a blood sample and growl every time a joke is lame. It would be amazing.

After the Weimaraners came a series of pretty and dumb Cocker Spaniels who weren't much in the way of guard dogs, but were always down for a good round of dress up. Right now I have a mutt named Hogan McSmalls. He doesn't protect me from anything, but he's the best thing that's ever happened to me because I love him unconditionally and he's made me realize something very important: Every girl needs a dog.

I'm not saying boys don't need dogs. And I'm not cat bashing, either. Cats are cute. Yeah, I said it. But, I still say every girl needs a dog. Please hold all eye rolls until I've pled my case. Here we go:

1. Cuddling: Having a dog is like having a cuddle partner on command, and what girl doesn't need a good cuddle now and then? I figure my dog is a living version of all those stuffed bears I hugged to death when I was a kid. Not that I'm hugging him to death. He's quite alive. He's also soft and cute and the bestest cuddle monster ever oh yes he is! And, look, a dog will snuggle with you while you're watching a guilty-pleasure chick-flick, but he won't tell all your friends about it later at happy hour. Win-win.

2. Walking: Having a dog gets you off of your ass during that "Pretty Little Liars" marathon and out onto the street multiple times a day. Which is good for you and stuff. Also, let's say you want to walk down to Starbucks to get an almond milk chai latte real quick, but you don't want to be harassed by construction workers, guys in Hummers, etc. Bring the dog. No one messes with a girl whose friend has that many sharp teeth. (This is only applicable in a big city but, hey, it might also work on cows or pigs in the country.)

3. Playing: When was the last time you ran around your house acting ridiculously silly? (I'm talking while sober, ladies.) With a dog, you'll play on the reg. Hogan and I play hide and go seek, 'where did I put your toy ooh look it's behind my back,' chase, 'growl at the plant' and (my fave) 'throw the toy lobster until my hands fall off.'

4. Conversation: Who else will sit and listen to your theory that everyone secretly likes "Nashville" better than "True Detective," but they say they love "True Detective" to sound cool and smart and did I say smart? Who else will sit on the couch with you and gaze intently at your face as you cry about how you used to think your hair looked great in a side braid, but now you're not even sure and why hasn't you-know-who even texted back yet anyway? Maybe you shouldn't have texted the smiley face wearing sunglasses emoji.

5. Laughing: My dog scares himself when he farts. He also throws happy fits on carpets, stretches of green grass and occasionally the floor of the vet's waiting room. He's the funniest, goofiest, silliest thing in the whole world and he makes me laugh all day every day. Who doesn't need that in their lives?

The defense rests, your honor. Every girl needs a dog. So, go adopt a dog, ladies! Your fuzzy bestie is probably waiting for you at a local shelter or charity. 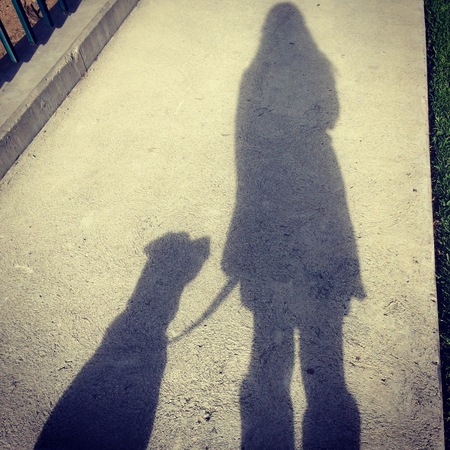