By Clay Skipper for GQ. 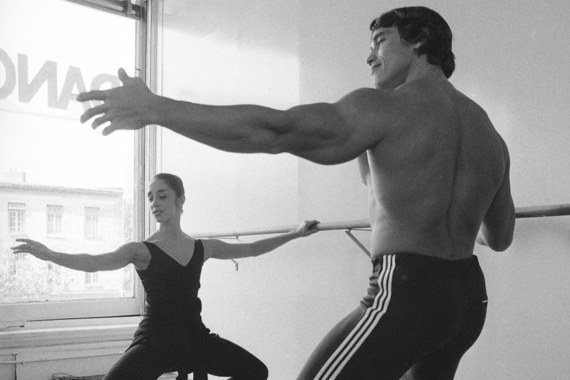 Barre class? Like, the ballet-dancer workout? Nope. No way. Not a chance.

If you're a human of the dude persuasion, that's probably what you're thinking. That's what I was thinking. My reluctance had a little to do with my prematurely stiff, 26-year-old knees--my grandma and I were once taking the same osteoarthritis meds; she's 85--and a lot to do with the thought of telling my friends, "Sorry, can't make it. Taking a barre class."

But then GQ agreed to expense it.

So I headed off to the scary-sounding Core Fusion Barre Express class at the much more friendly-sounding Exhale Spa, in the basement of the Gansevoort Hotel in N.Y.C.'s Meatpacking District. And these five lessons (along with a slightly lifted ass) are what I took away.

First of all, the class is not as ballet-y as you think...
Sure, there's a ballet barre in the class. But in the event your misinformed, preconceived notion of barre was like mine--that it's The Nutcracker for dummies--well, it's not. It's a dynamic, whole-body workout (which, really, is how it's advertised, if I'd ever bothered to look) that's all about intensely concentrated, isolated movements, with tons of repetition and very little rest between exercises. All that said, you will still have to plié, which is a fancy French word for very sore quads.

...but it's much, much harder than you think.
I'm athletic, you think. I played JV basketball. I've even done SoulCycle! Barre class? I'll be fine. And then you find yourself slowly bouncing up and down with a green ball between your knees, trying to get your legs to stop shaking like a vat of pudding on a bumpy country road, vigorously crying, sweating and whispering to the much more flexible, in-shape girl next to you, "Man, pliés fucking suck, huh?"

Myth: A good upper-body workout requires heavy lifting.
The class starts with grabbing a mat and a set of one-, two-, or five-pound dumbbells. You'll grab the five-pound weights, because come on, it's five pounds, right? But here's the thing about five-pound weights: They're great for the first ten to fifteen reps, manageable for the next ten to fifteen, and then downright brutal once you pass that 25-30-rep threshold. Before blacking out from searing pain after five minutes of arm exercises, I did biceps curls, triceps kickbacks, and an exercise that hit muscles in my arms I didn't even know I had. (Try it: Put the weights above your head, arms bent, and slowly pulse them down toward your ribcage and back up like you're doing a pull-up. Repeat. Like, 95 times.)

This, really, is the big takeaway for anyone who learned about fitness through watching Jersey Shore: You don't need a bench press, a squat rack, and a pile of 45-pound plates to get a good workout. You just need some very focused movements, and a willingness to walk through a fiery hell of discomfort.

You probably aren't working out your legs enough.
After arms, we moved to legs, which is where the ballet barre came into play. I used it for balance as I bounced up and down with a ball squeezed between my knees; or as I stood on the toes of one foot and kicked the other behind me, moving it up and down in quick pulses, lighting my glutes on fire. This, apparently, is how you get an ass.

The pain of being inflexible far outweighs the boredom of stretching.
When I started physical therapy for patellar tendinitis, they told me to stretch for 30 minutes every day. It'll reduce the inflammation and make your knees feel better, they said. I didn't, because: Where's the fun in that? I quit physical therapy four sessions in. My knees still hurt.

A lot of the exercises in Barre are the same ones I did in physical therapy, like glute bridges, one of the last exercises we did in class. Simple movements that target oft-ignored, hard-to-hit muscles in your legs, which, in turn, makes you less sore and relieves joint pain. They are tremendously painful and not at all exciting--but they work! So don't be like me. Don't be a quitter. Take up yoga; take some time to stretch every day; do Pilates; go to a barre class. Get flexible while you still can.