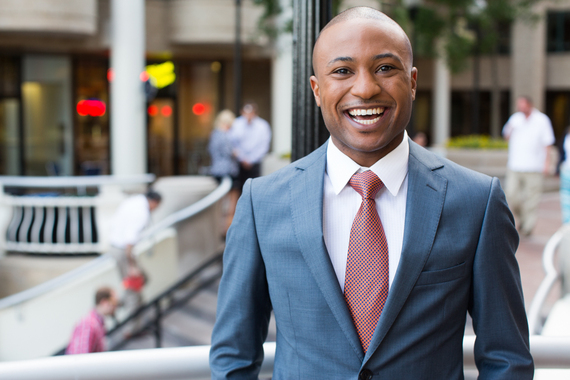 I did everything that they tell you to do. I had the degree, the condo, the six-figure salary, and the prestige of working at one of the world's top consulting firms. I was also absolutely miserable. Sunday was always the worst day because Sunday meant that Monday was just around the corner. On Monday the countdown began - four days until Friday, three days, and so on. At the age of 27, being this unfulfilled was no way to live and so I did what they tell you never to do. I quit. And here's why:

1. I was tired of the glass ceiling.

A lot of people picture success as a board room filled with men in suits who may or may not look anything like you. That was my reality. At my job, the people around me looked nothing like me. We didn't have the same backgrounds or attend the same schools. We didn't have the same underlying connection. Fitting in was never important to me until I realized it was limiting my success. I started noticing that things seemed easier for people who were otherwise my equals. I was good at my job and had earned the right to be there but they seemed to move quickly up the ladder while I was still trying to find my footing. There was a glass ceiling looming above my head and eventually I grew tired of chipping away at it. I decided I had the power to build something of my own where the sky was the limit.

2. I wanted control of my income potential.

As a consultant, the companies I worked for charged clients hundreds of dollars for just one hour of my time. I was making those companies a lot of money but little of it went into my pocket. In a year, my work generated hundreds of thousands of dollars of revenue for my employer but I was only paid a fraction of it. I was doing all of the work and the people upstairs were reaping all of the benefits. I felt that if I was putting all of my energy and talents into something, I should be entitled to as much of the spoils as I deserved. The way I saw it, even though I was making a great salary, when someone else could dictate what I was worth they had the power.

3. Building wealth was important to me.

Research shows that the percentage of the world's millionaires who are business owners is more than double the percentage of millionaires who work for someone else. I never wanted to be rich for the sake of being rich; I wanted to build wealth and have a level of financial security that meant I'd never worry about money again. Even though I knew it was possible to build wealth as a salaried employee, I knew that if I started my own business I held all the cards and the odds were more in my favor.

When I was a kid I had to ask permission to go outside and permission to be excused. Once I became an adult I figured those days were over. I was wrong. In my corporate job I found myself asking permission constantly; especially when it had to do with my time. I asked for permission to leave early, permission to take a vacation and even permission to go to the doctor. I couldn't help but wonder "why am I still asking permission?". Don't get me wrong, I believe in getting the job done and respecting the rules of the workplace but that isn't necessarily the same thing as punching a clock. I realized that the time I spent at work was not a reflection of the quality of my work but rather a reflection of how long my employer owned me each day. Now that I've started my own business I spend part of my time getting the job done and the rest enjoying a job well done.

5. I was in pursuit of the life I deserved.

I don't think there is anything wrong with corporate America or working for someone else. I know that it is the right fit for a lot of people and that is what I want for everyone - to find what is right for them. It wasn't right for me. For me, it represented limits on my time, income, and opportunity. I wanted to be limitless. I wanted to reach my potential. Not just the potential that my employer saw in me but the potential I saw in myself. I knew that there was more for me and that it was up to me to take back my power and build the life that I deserved.

My decision to take a risk on myself has taken me to greater heights than I imagined. Today I am the proud owner of National Care Financial Group, a national financial services firm with corporate offices in Washington, D.C. and Los Angeles. This is what I find most rewarding about my life. Whether it is ensuring that all of my National Care team members own their individual practices within our firm or I am simply spreading my message to as many people as possible, I find fulfillment in helping others navigate the same path to entrepreneurship and freedom that I took.