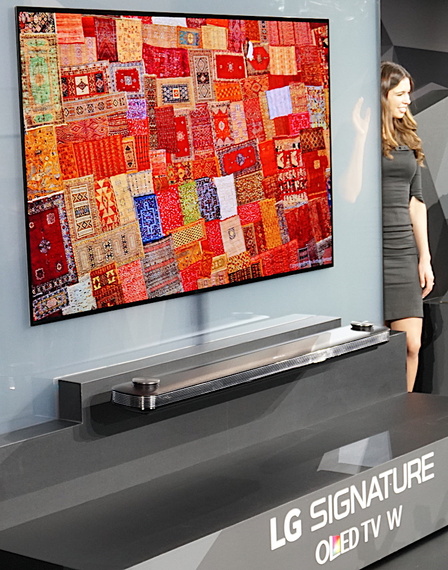 Even though I'm an early adopter geek, I suffer a tech reporter's reflexive professional interest in buying a 4K TV. Why anyone else would buy a 4K TV I find a puzzlement.

Why not get a 55-inch 4K? Because buying a 55-inch 4K is stupid. Because at a normal viewing distance - 6 feet or more - it's virtually impossible to tell the difference between a 55-inch 2K TV and a 55-inch 4K TV. You might be able to detect a difference if the 55-inch 4K offers higher contrast HDR or if you have platinum eyes. Maybe. But that marginal maybe is hardly worth spending several hundred or several thousand dollars on a new TV.

2. There's nothing to watch in 4K. Okay, hardly nothing. There's streaming 4K from online services such as Netflix. But you'll need a robust broadband internet connection to seamlessly stream it, and even then you may not be streaming all the bits necessary to create a true 4K image. DirecTV and Dish satellite TV subscribers have access to additional 4K content, and you also can buy a 4K Blu-ray player - LG and Sony both announced players, joining available decks from Samsung, Panasonic, Philips and Oppo; by the end of the year, there'll be more than 100 titles to choose from.

3. There's no 4K on actual TV. Sure, you can stream 4K movies from Netflix, subscribe to satellite TV and own a 4K Blu-ray player. But the vast bulk of your regular, everyday TV watching - CBS, CNN, ABC, HBO, ESPN, NBC, et al - is broadcast in regular HD, aka 2K. Which leads us to....

And not all 2K-to-4K upconversion is created equal. The processing and algorithms to successfully upconvert 2K to 4K is complicated, and not all 4K TV makers do it well.

Not that you'd know. 2K-to-4K upconversion isn't always tested by 4K TV reviewers. And when it is, it's always tested with a 1080p Blu-ray, not broadcast/cable TV at 1080i or 720p or even a 480p DVD. I have yet to attend a manufacturer demo that compared a 4K TV displaying ESPN or Fox or Bravo to the same on a 2K TV.

And forget about getting a 2K-to-4K/2K A-B comparison on a retail show floor since few retailers even stock 2K TVs anymore.

So there's no way of knowing if any 4K TV will display regular old TV better than the 2K TV you currently own.

5. Your 4K TV may soon be obsolete. To answer this no-4K-on-regular-TV problem, the TV powers that be are preparing a technology called ATSC 3.0, which will enable broadcasters to deliver regular TV in 4K.

Except that 4K TVs will need an ATSC 3.0-compatible tuner, which today's 4K sets lack.

If you're a cable-cutter with no cable box or satellite box (future versions of which likely will include ATSC 3.0), you'll need a 4K with a built-in ATSC 3.0-compatible tuner, or add a USB stick with an ATSC 3.0 converter, to watch over-the-air 4K broadcasts on current 4K TVs.

At CES, LG announced the first-ever ATSC 3.0-enabled 4K - but it'll be sold only in South Korea. In the U.S., "it's going to take a number of years for [ATSC 3.0] to transition voluntarily on a market by market basis," according to a TV market analyst.

And I haven't even talked about the variation of HDR - high dynamic range, which dramatically increases color density and contrast - now available on varying 4K TVs.

Despite these five caveats, as a tech reporter I may soon have to bite the 4K TV bullet. If I succumb, which 4K TV do I buy?

I told myself that if - and that's a ginormous IF - I decided to buy a 4K TV, it'll be an OLED set. I'm a fiend for deep black levels, and I have yet to see any LCD that can reproduce blacks as well as plasma and OLED. Until the last month or so, that is - but hold that thought.

One 4K TV that is ridiculously tempting is the wallpaper 4K OLED LG unveiled at CES last month. The 65-inch OLED 65W7P ($7,999.99) (a 77-inch version is pending) is a silly .2 inches - a 5th of an inch - thin, is flexible like a sheet of plastic (which is essentially what it is), and attaches to a wall via magnets. It's an enviably cool conversation piece for those who can afford it.

But LCD is catching up to OLED in terms of black levels. At CES last month, Samsung showed a deceptively labeled QLED. This acronym implies and sounds as if these new sets are OLEDs, but they're simply souped-up LCDs with traditional LED (not OLED, which is a different animal) backlighting and a new quantum dot coating that boasts boosted blacks and contrasts. These QLEDs just went on sale on Amazon, with more to come.

More impressive, however, were the new Sony 4K sets I saw a couple of weeks ago (but was sworn to silence on until today).

Last year, Sony unveiled its Z9D LCD 4K TV, which displayed the best blacks I've seen outside of an OLED, and was one of the highest quality TVs available last year. While the Z9D remains in the Sony line (65-inch $5,499.99, 75-inch $8,999.99) and presents a tempting OLED alternative, the company will soon be selling several new almost as impressive LCD models, including the 65-inch XBR-X930E ($3,999.99) and the 75-inch XBR-X940E ($7,499.99), all of which include a number or advanced and enhanced features over last year's versions, including a substantial 10x boost to its HDR contrast that gets them close to the quality of the Z9D at a slightly lower price.

These souped-up LCD 4K TVs supply near OLED blacks, but are twice to three times as bright as OLEDs (measured in a unit called a "nit"). LCD's naturally higher screen luminance - up to a reported 4,000 nits for Sony's Z9D, but usually between 1,000-2,000 for other 4K LCDs - means these new 4K LCD TVs retain their deep blacks, high contrast and rich colors even in bright rooms. Lacking artificial backlight, self-illuminating OLEDs usually put out only around 500 nits and so perform best in dark rooms. 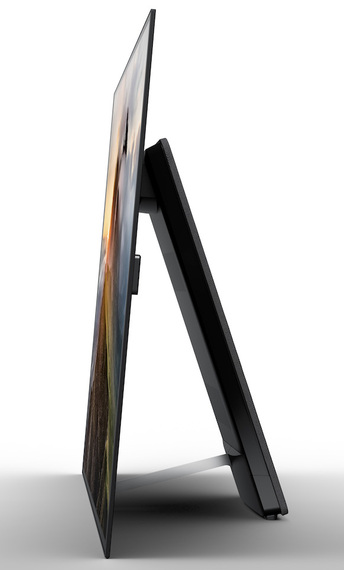 But the real jewel among Sony's 2017 4K TV models is the company's first OLED, the A1E. Sony reps wouldn't say, but it's a near certainty that the A1E models (available in the dreaded 55- and more acceptable 65-inch sizes) use OLED panels sourced from LG - LG is the only only company making and supplying OLED panels to other 4K TV makers - but has configured its own electronics that purports to provide a picture superior to LG's own models.

In a side-by-side comparison with a current LG OLED, the Sony A1E seemed to display brighter colors, higher contrast and less "banding" - fields of solid colors in visible stripes as the color gradually darkens or lightens - than the adjacent LG OLED. Of course, a side-by-side comparison conducted by one manufacturer should naturally be taken with a large grain of salt. But the A1E screen includes an "acoustic surface" that becomes an actual speaker, so sound emanates directly from the screen rather than the sides. Combined with a built-in subwoofer, the effect is kind of startling (although still not a replacement for a true surround sound system).

Oddly, instead of employing a traditional TV stand, the A1E sits on easel that positions the set at a slight upward-facing angle. I don't understand this oddity since most people are going to sit their TV atop a table or cabinet, rather than on the floor, which makes the upward angle more pronounced. But the A1E can be wall-mounted, so there's that.

Unfortunately, Sony won't announce price or availability of the A1E until later this year.

I'll surely be tempted to take the 4K dive at some point, either the LG wallpaper OLED, the A1E or Z9D from Sony. But I'm far more tempted to wait for ATSC 3.0 to roll out and I can watch regular TV in 4K and/or for ultra-black 4K variations to be the affordable norm rather than expensive exceptions.

And, maybe, so should you.