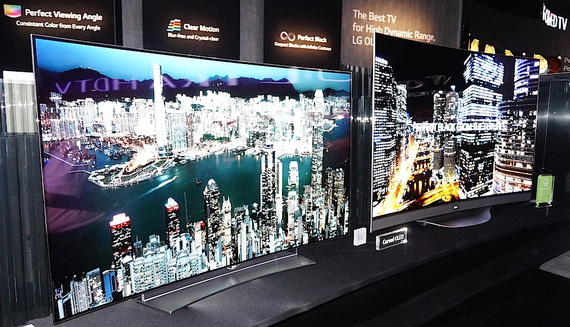 Don't get me wrong. I positively drool whenever I see an Ultra High Definition (UHD) so-called 4K TV (technically, "UHD" isn't exactly "4K," but it's close enough; here's an excellent UHD primer). Over the last few weeks, Samsung, LG and, this week, Vizio, all presented their 2015 UHD wares to the rest of the equally-drooling tech press corps.

To battle LG's OLED UHD advantages, Samsung has boosted the colors and black levels on its new JS9500-series S-UHDs using a technology called quantum dot. Instead of boring you with the OLED vs. LCD details here, here's a piece exploring all the technologies UHD TV makers are employing to combat LCD's inherent flaws.

Okay, so OLED and quantum dot UHDs are drool worthy. But would I buy an OLED or a quantum dot or any 4K UHD TV?

Nope, at least not yet. Here are 5 reasons why I'll wait at least a year to buy my first 4K UHD TV.

Netflix launched its latest binge-worthy series, Daredevil, last Friday, in 4K. It was shot to take advantage of not only 4K but OLED's superior ability to display dark shadow detail so precisely. Netflix, along with other streaming services such as Amazon, YouTube and M-Go, are offering 4K content.

Check out all available 4K content in this comprehensive guide by my buddy David Katzmaier on CNET. As you'll see, there's not a whole lot of 4K content out there yet.

But don't expect to see 4K content broadcast -- ever. Which means no 4K sports broadcasts, for instance.

The biggest cache of 4K content will be coming later this year and early next year when the first 4K UHD Blu-ray players appear from Panasonic, Samsung, LG, et al. All new programs and movies are being shot in 4K, and Hollywood studios will likely re-master their catalogs in 4K so they can sell you new 4K copies of movies you've already bought three or four times in the last 20 years.

Yes, all UHDs offer upscaling -- blowing up HTDV to 4K. But results vary wildly from one UHD to another.

Bottom line: there'll be a lot more 4K content to stream and buy on Blu-ray in about a year from now.

2. You Won't See the Difference.

Even if you could access the few 4K programs available, it's an open question whether you'll be able to see the difference between UHD (4K) and HDTV (2K).

In the HDTV world, it's impossible to detect the difference between 1080p and 720p resolution on HTDVs smaller than 50 inches watched from a normal viewing distance.

Check out this image of "Sunday in the Park" by pointillist painter George Seurat. Viewed up close, you can see the points. Shrink the picture and move further back, and the points fade to create a solid image.

The only way to detect the dot detail improvement from HDTV to UHD is to either get closer or get a much larger screen -- or both. Only gamers who sit super close to their UHDs will be able to detect 4K's detail superiority, assuming the game is in 4K. But for those of us watching House of Cards on 60-65-inch sets sitting 6-8 feet away? It'll be really hard to tell the difference between 4K and 2K, certainly not a difference worth the UHD price premium.

Which leads us to...

Only slightly larger UHDs are priced anywhere from four to nine times higher.

As with all electronics, prices on UHDs will begin to drop as other suckers...er, I mean customers (slight error) buy current UHD models.

In order to differentiate UHDs from HDTVs in stores, UHD makers have curved their sets so you can tell the difference. There is no other reason why UHDs are curved -- pure marketing gimmickry.

Oh, the UHD makers and your pimply sales person will wax poetically about how the curvature helps envelope you in the on-screen action and blah blah blah...

Bull hockey. It's the whole perception-is-reality thing. The curvature looks different, you want something new and shiny, so you believe the curvature is an improvement.

It isn't. In fact, the curvature, especially on an LCD UHD, cuts down an LCD's already limited viewing angle and increases the reflective glare from ambient lighting sources.

Plus, there's a bit of weird irony to the whole curved TV bit. For years, TV makers have been striving to make their TVs as flat as possible; OLED TVs are an astounding 4mm thin. But curving just makes them fat again. WTF?

I'm hoping LG (since I want an OLED set) will offer flat models next year.

UHD is still somewhat a work in progress. This year's models still don't conform to a number of pending, still in development or just announced highly-technical upgrades such as HEVC, HDCP 2.2, HDR and HDMI 2.0a.

For the average viewer, the subtle differences these H-acronyms upgrades will provide are admittedly hardly earth-shaking or even noticeable, with the singular exception of HDR, High Dynamic Range.

HDR brings a demonstrably higher degree of color, both in intensity and the number of colors and how accurately they're displayed. You can see the difference HDR makes on photos you snap on an iPhone with HDR switched on or off.

Dolby Vision, Dolby's HDR TV technology, will be included in Vizio's just-announced 65- and 105-inch Reference Series models, the first UHDs with HDR (no pricing or availability has been announced).

In a demo at the Vizio event, the improvements HDR deliver in detail and depth are startling. Not only are colors brighter and more life-like via HDR, but image aspects heretofore undisplayable because of the limitations of LCD sets and, to a lesser extent, plasma displays, can now be seen.

Check out this example:

Above are freeze frames from Man of Steel displayed on a 2014 Samsung UHD on the left and on a Vizio Reference Series set on the right. On the Vizio, you can see Russell Crowe's Jor-El clearly despite an explosion flashing in the background. But Crowe/Jor-El is completely bleached out by this explosive flash on the Samsung, which is unable to display the wide breadth of color that HDR supplies.

HDR, however, requires a UHD capable of displaying its expanded color range, such as OLED, quantum dot or some other physical LCD enhancement. Vizio's Reference Series sets include just such a phosphor-based wide color gamut enhancement (think quantum dot light).

Movies and TV shows also have to be mastered in HDR to be seen on an HDR-enabled UHD. Thus far, only Warner Bros. has started mastering its films in HDR; Edge of Oblivion (aka Live, Die, Repeat), Man of Steel, The Lego Movie, Into the Storm and the first two Robert Downey Jr. Sherlock Holmes films will be the first movies mastered in Dolby Vision -- soon to be streamable from Vudu -- with more to come.

Unfortunately, each UHD maker wants to develop its own proprietary HDR platform rather than simply adopt Dolby Vision. Dolby Vision, however, is an optional specification in the 4K Ultra HD Blu-ray standard, but it's unclear if the HDR advantages of a Dolby Vision-mastered Blu-ray will be seen on a UHD that deploys a proprietary HDR technology.

So why not just wait till your UHD is as future-proof, flat and affordable as possible? I know I will.