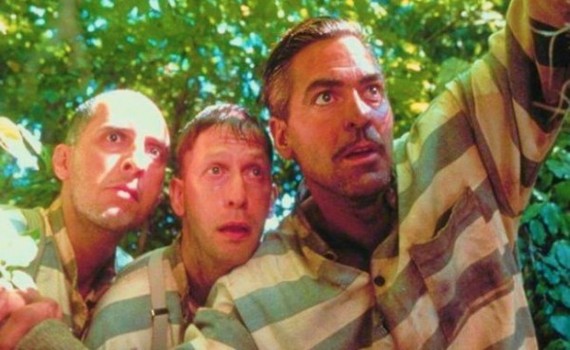 O Brother, Where Are Thou? hit theatres 15 years ago, on December 22, 2000. And to this day it remains my favorite film. O Brother transcends age, tastes, and even sociopolitical leanings. (It's Mitt Romney's fave flick, and he's pretty much the polar opposite of most HuffPost bloggers.) Here are five reasons this comedic gem is one of the all-time greats...

It's Ridiculously Quotable
Nearly every line in O Brother is memorable for being pithy, hilarious, or simply downright fantastic. That's a rare feat for even the best of movies to pull off. Some highlights:

"Damn, we're in a tight spot!"
"Well ain't this place a geographical oddity! Two weeks from everywhere!"
"I'll tell you what I am -- I'm the damn paterfamilias!"
"Say, any of you boys smithies? Or, if not smithies per se, were you otherwise trained in the metallurgic arts before straitened circumstances forced you into a life of aimless wanderin'?"
"I don't want Fop, damn it! I'm a Dapper Dan man!"
"Friend? Some of your foldin' money is come unstowed."
"Wouldn't we look like a bunch of Johnny-come-latelies, bragging on our own midget -- doesn't matter how stumpy."
"Say, uh, cousin Wash? I suppose it'd be the acme of foolishness to inquire if you had a hair net."
"The old tactician has got a plan. For the transportation that is -- I don't know how I'm gonna keep my coiffure in order."

It's Inspired By Great Literature
Although O Brother is about three chain gang prisoners on the run in 1937 Mississippi, the story is loosely based on one of history's most important works of fiction: The Odyssey by Homer. Composed around 800 BC, it's the second oldest surviving work of Western literature. You know, no biggie or anything. The parallels between O Brother and The Odyssey are loose but substantial. Bereft of a decent savings account -- or information on a gold IRA rollover, for that matter -- Everett McGill (Ulysses) embarks on a treasure quest, promising untold riches to his cohorts. Mind you, his most pressing goal is to prevent his estranged wife Penny (Penelope) from marrying a new suitor. Throughout his journey, he's thwarted by three beautiful women by the water (Sirens), a one-eyed bible salesman (the Cyclops Polyphemus), and the evil Sheriff Cooley (Poseidon). Helping him along the way are the Blind Seer (Tiresias), and radio station manager Mr. Lund (Homer). Clearly every teacher and book nerd alive wants you to view this.

The Music Is Phenomenal
In some ways, O Brother, Where Art Thou? the film was overshadowed by O Brother, Where Art Thou? the soundtrack. Not entirely surprising, given the latter became responsible for a veritable resurgence of Depression-era bluegrass, folk, country, gospel, and blues. It nabbed several high-profile accolades, including the 2002 Grammy Award for Album of the Year, making it one of the most respected soundtracks of all time. Highlights include I Am a Man of Constant Sorrow by Dan Tyminski, Keep On the Sunny Side by The Whites, Big Rock Candy Mountain by Harry McClintock, and Didn't Leave Nobody but the Baby by Emylou Harris, Alison Krauss, and Gillian Welch.

The Casting Is Spot On
Although George Clooney is quite the talented actor, it's often said he plays variations of the same role. The argument is fair -- how different is he really in The Descendants, Up in the Air, The Ides of March, and the Ocean's movies? That said, ol' George seriously shakes things up in O Brother, Where Art Thou? as the vain, loquacious-yet-dimwitted Everet McGill. His voice, mannerisms, movements, and several other go-to Clooneyisms are nowhere to be found. No surprise he ended up nabbing a Best Actor Golden Globe for his efforts. The supporting cast is just as stellar: John Turturro and Tim Blake Nelson as Everet's crew, John Goodman as the Cyclops, Stephen Root as the radio station owner, and last but not least, Charles Durning as Governor Pappy O'Daniel. Completely flawless.

It's The Writing And Directing, Stupid
All the above praise for O Brother, Where Art Thou? wouldn't amount to a hill of beans if it weren't accompanied by some pitch-perfect writing and filmmaking. Fortunately, that's where the Coens come into play. The impeccable direction -- plus the stunning cinematography of Oscar winner Roger Deakins -- is arguably their career best. Their script is tour-de-force, seamlessly blending humour, drama, action, intrigue, and music, with rich, wonderful characters. The end result? A smart comedy about dumb criminals with enough heart to fill five other movies. Is it any wonder it continues to stand the test of time?