It's no secret that Walmart is the nation's largest retailer and that the family who owns Walmart, the Waltons, are mega-billionaires worth more than $144.7 billion, but what you might not know is that Walmart is the the largest private employer in the United States employing over 1.3 million workers.

Employing this many workers may make the company seem virtuous and altruistic, but the business model is not a model other companies should emulate. The middle class is struggling economically today because of the corporate practices and loop-holes that Walmart has established as an industry standard. This holiday season, when you're looking for the most sought after gifts -- avoid shopping at Walmart. Below you'll find the top five reasons why if you shop at Walmart this holiday season you're pretty much a Scrooge. 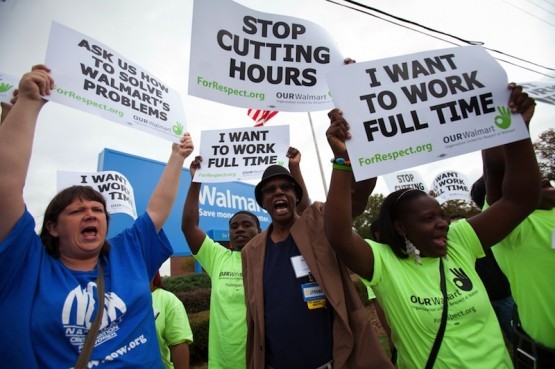 1. Walmart doesn't support American business.
While the company proudly boasts and encourages shoppers to "Buy American," the majority of the company's goods are made outside of the United States and often made in sweatshops. When you buy something at Walmart, you are not buying American.

2. Walmart creates more poverty than jobs.
When a Walmart store comes to town --  it isn't the economic golden child the company's PR machine would like you to believe. In fact, a study done by the Northwest Community group estimates that a Walmart opening up in a local town will actually decrease the community's economic output over 20 years by an estimated $13 million. It also estimates that Walmart will cost the community an additional $14 million in lost wages for the next 20 years. This translates to communities being worse off in the long run when Walmart strolls into town. When you shop at Walmart, you are not creating jobs.

3. Walmart's jobs are poverty jobs.
This year numerous studies released expose Walmart's poverty wages and the corporation's willingness to place that burden on taxpayers -- not the company. A report by Wisconsin's Democrats looked at how to quantify Walmart's cost to taxpayers in that state. At a minimum, Walmart workers in the state rely on at least $9.5 million a year to subsidize medicaid for workers. If these poverty level wages were raised to $10.10 an hour it would create 100,000 new jobs in the overall Wisconsin economy, not to mention adding another $13.5 billion to the overall economy. When you shop at Walmart you support poverty wages.

4. Walmart fires workers illegally.
Walmart has a long history of violating workers' rights far beyond mistreatment. The National Labor Relations Board found that Walmart has violated the rights of workers by "unlawfully threatened, disciplined, and/or terminated employees" for "having engaged in legally protected strikes and protests" and "in anticipation or response to employees' other protected concerted activities." In essence  --  Walmart not only encourages its managers to bully employees who want to speak out about unfair practices, they will also fire you if they find out you're planning a strike. When shopping at Walmart you support their anti-worker practices.

5. Walmart is a JOB KILLER.
We've touched on how Walmart promotes itself as a company that values made-in-America products while their products on its shelves are largely produced overseas and in sweatshops. We've highlighted how Walmart relies on subsidies by the federal government to legally pay their workers poverty wages. We've even exposed Walmart for illegally firing its workers who plan to strike or threatening their jobs to keep the workers from speaking out. All of this adds up to Walmart costing us an estimated 196,000 jobs  --  many of them manufacturing jobs between 2001 and 2006. To prove the power Walmart has in the job market  -- each store opened destroys almost three local jobs for every two it creates. When you choose to shop at Walmart you don't create jobs.

We're not alone in reconsidering our Walmart shopping habits. A recent blog on Daily Kos pointed out that a poll by Lake Research Partners found that Walmart's reputation is suffering among consumers with 28 percent saying they have an unfavorable view of Walmart compared to just 13 percent for Target and just 6 percent for Costco. This large unfavorable view is having an impact on Walmart's most loyal customer base, who in the same poll, said they have decided to shop their less because of the mega-retailer's reputation.

All of this adds up to you having the power to make a difference for retail workers across the country. If you, like all of us at Brave New Films, avoid shopping at Walmart this holiday season, you'll send a strong message to the retailer that workers' rights and living wages are more important to you than a few extra dollars in savings.

If you'd like to learn more about Walmart and its horrible practices, watch Walmart: The High Cost of Low Price for free below.