It's frustrating to still hear dissenters say that renewable energy is not ready to compete with fossil fuels as a means to power our country. The solar industry is growing dramatically every year, while fossil fuels continue to be phased out. Solar is no longer the cottage industry it was decades ago. Stunning advancements in production and financing have brought solar to the playing field with coal, oil, natural gas, and nuclear. And here are five reasons why solar is already winning. 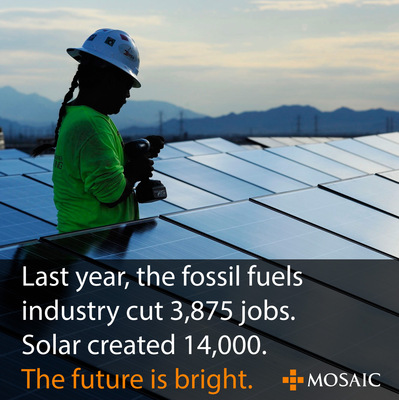 There are more people in the U.S. employed to create solar energy than to mine coal. The banal argument that transitioning to a clean energy economy will cost us jobs is false. Solar is growing over 10 times faster than the American economy.

In 2012, solar added 14,000 new jobs, up 36 percent from 2010 and the industry will add another 20,000 jobs this year. The fossil fuels industry cut 4,000 jobs last year. During their recent solar boom, Germany doubled their solar workforce to over 400,000. The most important point is that renewables are more job-dense than fossil fuels, so even at the same price, solar will employ more people than fossil fuels. When it comes to employing Americans, solar is winning. 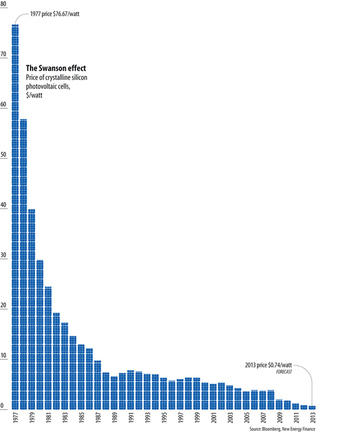 Solar panels have a seen a consistent drop in prices over the last three decades, and in the last few years that drop has been meteoric. In the last 35 years prices have gone from $77/ watt to around $.75/ watt. That makes solar 99 percent cheaper than it used to be. Since 2008, the cost of coal has risen 13 percent. In some parts of the market, solar has already reached parity with coal!

I'm sure you've heard the argument that solar is economically effective only by relying on government subsidies. Currently this may be true, but if solar prices reach Citigroup's prediction of $.25/ watt by 2020, subsidies may not even be needed.

And then there's the glaring fact that oil, gas and coal receive subsidies that dwarf those for renewables ($409 billion v. $60 billion globally).

And that's ignoring the extra costs that burning fossil fuels impose on the rest of society, that aren't paid by fossil fuel companies (called "externalities" by economists). The Harvard Medical School estimates that burning coal in the U.S. costs $500 billion in environmental and health damage. If those costs were taxed back onto coal plants, the price of coal would more than double.

And that's not even considering the whole climate change thing. 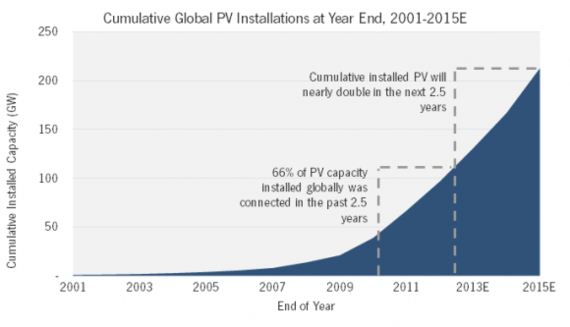 With the cost of solar dropping rapidly, installations are escalating at an exciting rate.

Earlier this year, the U.S. became the fourth country to have 10 GW of solar energy capacity, with installations increasing at a rate of 50 percent annually for the last five years. That rate is expected to increase to 80 percent this year.

⅔ of global solar capacity has been installed over the last two years. In contrast, 175 coal fired power plants in the U.S. are expected to be shut down over the next five years (over 10 percent of total capacity). This reflects the rising costs of coal and the implementation of stricter environmental regulations. 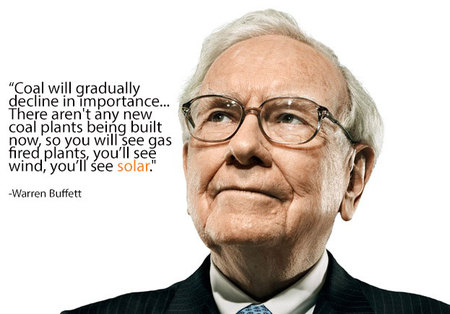 While fossil fuels have been an omnipresent part of investment portfolios for decades, their reign may be coming to an end.

Recently a number of reports have shed light on an impending "carbon bubble". Fossil fuel companies are valued in the market based on their reserves of unburned fuel still in the ground. If international regulations are put in place to prevent atmospheric CO2 from rising above 450 ppm (the estimated cap to avoid irreversible climate change), much of the listed reserves couldn't be burned for fuel.

This means that many fossil fuel companies are overvalued as they potentially have huge unburnable reserves of fuel. British bank HSBC estimates that once stricter climate regulations are put in place, the value of fossil fuel companies may fall drastically. Already, the market cap of coal companies has dropped in value 75 percent over the last 5 years.

Firms like Mercer and WHEB are advising investors to move their investments out of coal and oil and into renewables. Major investors are already making this move. Warren Buffett has invested $5.4 billion invested in solar and has predicted the end of coal as an American power source.

New financing models like solar leases and PPAs allow more consumers to make the home-solar investment for little or no money down. Additionally, the company where I work, Mosaic, has created a new investment platform that enables you to directly invest in solar projects and earn steady returns. 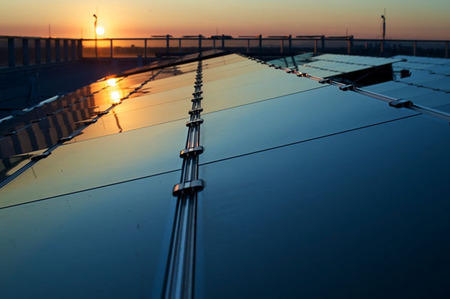 This one should be pretty clear, but here are some interesting impacts of coal extraction and burning that you may not be aware of (sourcewatch, US EIA):

Jacob Sandry is an Energy Studies scholar at Yale University and a fellow at Mosaic. He has worked in Colorado to protect endangered waterways and in Bolivia to protect animals rescued from the black market. Jacob has been to 5 continents, but originally hails from Minnesota where he developed his appreciation for the environment by camping, hiking and running. When not writing about clean energy, he's slam poet and an aspiring astronaut. Follow him on twitter @yaakovsandry.