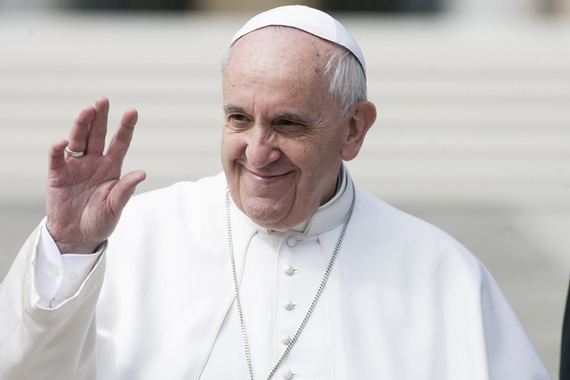 I never expected to sit down and read a 180-page treatise written by the pope. As a Jew, I don't generally spend my spare time studying Catholic teachings. But I do think about my children's future, and how climate change will alter their lives. I feel it's my moral, maternal responsibility to stop runaway climate pollution. And if someone else has something to say about that moral responsibility - especially someone whom a billion people consider their spiritual leader - I figure I ought to read the fine print.

Here is what I learned from reading Pope Francis's Laudato Si': The Care of Our Common Home.

1. Not just for Catholics. The pope addresses his Encyclical to every person alive. He thinks that repairing our relationship with the earth is a moral challenge not just for Catholics, but for all of humanity. Indeed, the questions the Encyclical addresses are universal: How should we treat each other? How should we treat our planet? What is modernity doing to our souls? How can we get on a better path?

"We must regain the conviction that we need one another, that we have a shared responsibility for others and the world, and that being good and decent are worth it."

"We need a conversation which includes everyone, since the environmental challenge we are undergoing, and its human roots, concern and affect us all."

2. Climate change is real. And it's caused by pollution. Actually, I wasn't sure if the pope would say this, but he did. His Encyclical acknowledges that we are in a dire situation with regards to the chemistry in our atmosphere, and that we are here because of pollution. I could have done without the qualifiers ("most" and "mainly"), which water down the assertion a bit, but I noticed that slight problem only after picking my jaw up off the floor and blinking a few times to make certain I had read it right.

"Most global warming in recent decades is due to the great concentration of greenhouse gases (carbon dioxide, methane, nitrogen oxides and others) released mainly as a result of human activity."

"Exposure to atmospheric pollutants produces a broad spectrum of health hazards, especially for the poor, and causes millions of premature deaths."

3. The solution is simple: leave fossil fuels behind. The pope has a somewhat radical, yet beautifully simple, solution to the situation we've got ourselves in: We should transition away from fossil fuels entirely. This is the kind of idea that, when it comes out of the mouths of others, is seen as unrealistic, extreme, and impractical. But when the moral leader of a billion human beings makes this assertion, it seems less far out. It seems, well, necessary. Obvious, even.

"We know that technology based on the use of highly polluting fossil fuels - especially coal, but also oil and, to a lesser degree, gas - needs to be progressively replaced without delay."

4. Think of the children. The pope understands that children play a special role in our global climate crisis. Not only will they bear the greatest burden from a warming world, but they also hold the key to change. As the pope sees it, it's in thinking about our children that we will spark the energy needed to make change. It's our contemplation of future generations that will lead us to make the right choices.

"Once we start to think about the kind of world we are leaving to future generations, we look at things differently; we realize that the world is a gift which we have freely received and must share with others."

"Leaving an inhabitable planet to future generations is, first and foremost, up to us."

5. Justice calls us to act. Much of the pope's Encyclical laments the ways in which climate change threatens the world's poorest and most vulnerable. This concern is not inserted in a paragraph or single chapter; it's woven into each and every page. The overall effect is unavoidable: If we think we are people who stand up for justice, then we must stand up for climate action. It's our moral duty as human beings to protect the vulnerable and forge a path of justice.

"A true ecological approach always becomes a social approach; it must integrate questions of justice in debates on the environment, so as to hear both the cry of the earth and the cry of the poor."

The pope has hope for our ability to solve this problem; he writes, "Humanity still has the ability to work together in building our common home." His words give me hope, too. After all, a billion people insisting on justice is a force to be reckoned with.