Did you know that half of all sexually active young people in the U.S. will contract a sexually transmitted disease by the time they're 25--and that most won't even know it?

This April, STD Awareness Month, Planned Parenthood of New York City is encouraging New Yorkers to educate themselves on sexually transmitted diseases (STDs) and to get themselves tested. We've joined with MTV, the Kaiser Family Foundation, and other organizations for the seventh year of the award-winning Get Yourself Tested (GYT) campaign. GYT is a national campaign that includes online and on-the-ground activities to promote sexual health among young people.

STDs impact young people the hardest. Half of the estimated 20 million sexually transmitted diseases in this country each year are in people under 25, although they represent only a quarter of people having sex. In New York City, females ages 15 to 19 have the highest rate of gonorrhea and Chlamydia, compared with females in all other age groups. Among males, those ages 20 to 24 have the highest rates of both gonorrhea and Chlamydia. Far more HIV diagnoses in New York City are in those ages 20 to 29 than in any other age group.

Everyone deserves a sex life that is safe and healthy. Many sexually active young people may not realize that getting tested is part of basic preventive health care and can actually help improve their sex lives.

Here are five things that young people should know about getting tested and STDs:

1. Getting yourself tested for STDs is one of the most important things you can do to protect your health. STDs, if not treated, can lead to serious health outcomes such as increased risk of cervical cancer and infertility.

2. Getting tested is easy and quick. For example, rapid HIV tests can provide results in 20 minutes from just a swab in the mouth. For other tests, all you have to do is urinate in a cup. No needles necessary.

3. Most STDs, including HIV, are treatable, and many are curable. The sooner you know your status, the sooner you can get treated. Not all medical checkups include STD testing--so unless you ask to be tested, don't assume you were the last time you saw your doctor.

4. You can't tell by looking at someone if they have an STD. Many STDs cause no symptoms. For example, 70 to 95 percent of women and 90 percent of men with chlamydia have no symptoms. On average, people with HIV don't develop symptoms for 10 years. The only way to know your status for sure is to get tested.

5. Young people in New York City and nationwide are disproportionately affected by STDs. Getting tested can help change this! 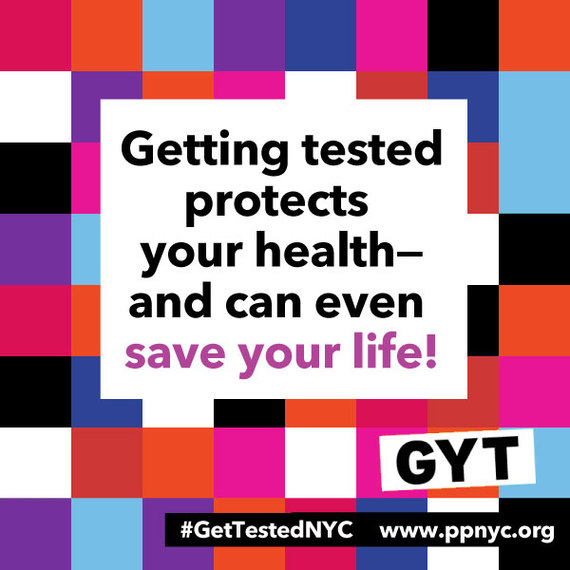 Because of health inequities, some other communities are also hit much harder by STDs. Black and Latino New York City residents account for dramatically disproportionate rates of new HIV infections. Nationwide, the rate of new HIV infections for Black women is 20 times higher than that for white women. For Latinas, the national rate is more than four times higher than that of white women. Overall in the U.S., men who have sex with men have the highest rates of HIV.

We work every day to reduce the rates of STDs--and our doors are open to everyone. Make an appointment at www.ppnyc.org or 1-800-230-PLAN.

This April, spread the word that STD testing should be a routine part of your health care checkups. It's one of the easiest and most important things you can do to protect your health.

CEO and President of Planned Parenthood of New York City