Myanmar (formerly Burma) is authentic, affordable and remarkable, and it should be added to your travel bucket list.

Called "The Golden Land" thanks to the thousands of gilded pagodas scattered around the country, Myanmar today is similar to what Thailand was like 25 years ago -- before shopping chains took over and popular movies like The Beach were filmed on its shores. Even McDonald's hasn't made its way to Myanmar's soil just yet.

But things are rapidly changing. Myanmar's tourism numbers are poised to explode in the coming years. In fact, according to the Myanmar Ministry of Hotels & Tourism, Myanmar welcomed 816,369 visitors in 2011 (when a military junta finally ceded power to the civilian government); the nation is projected to host more than 5 million travelers in 2015.

As foreign real estate investors look to develop the land to keep up with tourist demand, it's only a matter of time before this once untouched nation turns mainstream. Here are five reasons why it's time to plan a visit now.

1. The people
The people of Myanmar are not only welcoming to Westerners, but they're incredibly friendly. They are willing to go out of their way to show you around their country. Practicing English is important to them, so you will likely be approached with a genuine smile and a, "Hello, what's your name?"

2. Bagan temples
Bagan is an ancient city in Myanmar that boasts more than 3,000 temples dating back to the 11th century. With beautiful gilded spires spread out across the horizon, the landscape looks like something out of a dream.

Bagan itself feels more like a quiet village than a city partly because the temples outnumber the tourists, which makes exploring Bagan a more pleasant experience than the neighboring Angkor region of Cambodia.

Several tour operators, including Khiri Travel, offer guided day trips to Bagan, but you can also explore on your own by renting a motorbike for just $5 USD from your hotel or any local shop with a motorbike sign outside. On your own, you can seek out remote areas devoid of tourist groups and take in the beautiful scenery. 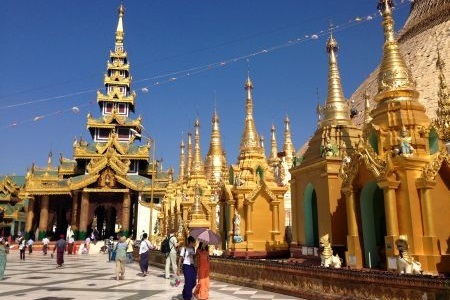 Standing at nearly 360 feet tall, the Shwedagon Pagoda is considered the largest and most sacred Buddhist pagoda in Myanmar. The entire structure, which dates back 2,500 years, is covered with hundreds of gold plates. The crown at the top consists of more than 5,000 diamonds and more than 2,000 rubies, sapphires and other gems.

You'll find the Shwedagon Pagoda in Yangon -- the most populous city and the location of Yangon International Airport, where you will likely be arriving from overseas. When entering the Shwedagon Pagoda, or any pagoda in Myanmar, you're required to take off your shoes and cover your legs. If you are wearing shorts, then you'll have to rent a longyi -- a sarong that looks like a colorful skirt.

4. Affordability
If you're looking for an inexpensive international adventure, you should put Myanmar at the top of your list. While lodging prices are inflated thanks to a shortage of hotel rooms and the sudden rise of tourists, you can comfortably live off $15 per day during a visit to the country.

Traditional meals will run you anywhere from 80 cents to $3. A 20-minute taxi ride around the city costs about $2 (but be prepared, you must negotiate). A one-hour massage costs around $3.50. A local Myanmar beer will run you $1. The 12-hour bus ride from Yangon to Bagan was about $8.

Unfortunately, budget-friendly hostels are limited and they cost about $20 per night. Meanwhile, hotels and resorts can cost anywhere from $50 to $250 per night. But several new accommodations are being built to account for the high number of visitors, so you may be able to find a cheaper place to hang your hat in the near future.

5. Cuisine
Food in Myanmar is plentiful, delicious and cheap. What makes it so unique is the fact that it's not really eaten outside of Myanmar's borders. How many times have you seen a Burmese restaurant in another country?

Dishes here are derived from Thai, Indian and Chinese ingredients, which shouldn't come as a surprise considering the country's geographic location.

The most common dishes are Mohinga -- rice noodles in an orange fish sauce; Shan Noodles -- traditional noodles stir-fried with chicken in bean sauce, vegetables and peanuts; and Onnokauswe -- noodles simmered in coconut milk. Most menus will also include curries and spicy soups.

And thanks to its tropical climate, Myanmar boasts bountiful fruit crops. Buy fresh fruit from a market stand for as low as 10 cents, or try a blended fruit smoothie for less than 50 cents.

Things to keep in mind before your trip 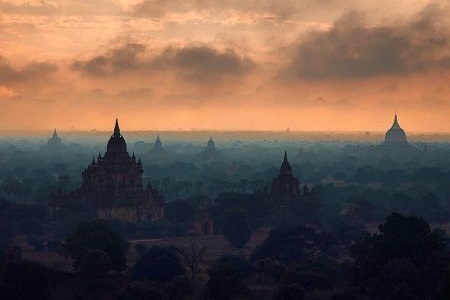 Although you'll see some incredible scenes in Myanmar, you'll have to forego some traditional comforts. Most public bathrooms do not have toilet paper, so carry extra tissue with you. Also plan to bring bug spray with you everywhere you go -- there are a lot of mosquitoes around tropical Myanmar. To avoid scorching hot temps or monsoon-like downpours, plan to take travel between November and March. When dining out, only drink bottled water and don't eat raw foods to avoid food poisoning. ATM machines aren't always available, so pack $20 and $50 U.S. bills. U.S. currency is widely accepted, and you can also exchange dollar bills for kyats ($1 USD is equal to about 1,030 kyats).

All U.S. citizens must hold a valid passport and apply for a tourist visa to enter Myanmar. You can apply for an evisa online on Myanmar's Ministry of Immigration and Population website. After filling out the application and paying a $50 fee, you'll receive an approval letter via email. Once arriving at Yangon International Airport, show your approval letter at immigration. Always have your visa number on hand because hotels will ask you for it. You should also bring extra copies of your passport and carry them around whenever you leave your hotel room.

According to the U.S. Department of State, the overall crime rate is very low, and violent crime against foreigners is rare. Still, keep your wits about you in public spaces. For more information about safety in Myanmar, visit the State Department's website.

About the author: As a recent University of Wisconsin-Madison graduate, Drew Goldberg has visited more than 40 countries since 2012. Drew is currently teaching English in South Korea, blogging about food, culture and nightlife at The Hungry Partier. You can follow his adventures on Twitter, Facebook and Google+.

More:
travelMyanmarburma
Newsletter Sign Up
An essential daily guide to achieving the good life
Subscribe to our lifestyle email.
Successfully Subscribed!
Realness delivered to your inbox