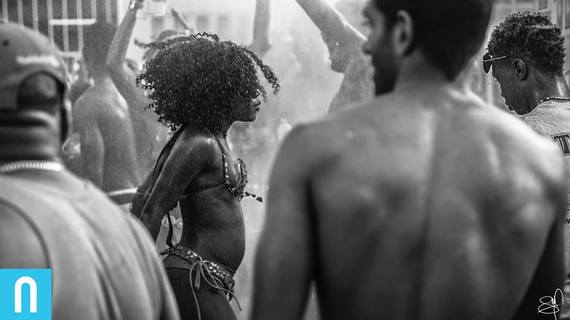 Don't tell Brazil, but Trinidad and Tobago Carnival is the single greatest festival on earth. There, soca subs for samba, beverages are bottomless and showcasing your worst behavior is celebrated (though whatever happens stays safely within the confines of Carnival).

The history of this pre-Lenten festival, which literally means a farewell to the flesh, began as a symbol of freedom and defiance during the time of slavery, so abandoning all inhibitions in favor of wanton wildness before the 40-day period of sacrifice starting Ash Wednesday, is a requirement.

Now that preparations for the Feb. 8-9 festival are in full swing and goers are buying their flights and their feathers, here are five reasons Trinidad's Carnival is the fete to hit.

1. The color and culture

Unlike Brazil's perhaps better-known bacchanalia, everyone can get in on Carnival in Trinidad. You don't have to be a samba practitioner, you just have to want in, be willing to pare down to near nothingness and be up for days on end of glorious revelry. On the Monday and Tuesday before Ash Wednesday, masqueraders come out adorned in all colors of beads and feathers, which have origins in African culture and symbolize rebirth and rising above life's ills. Join an all-inclusive masquerade band, or group, like Fantasy or Tribe, to participate in the parade. You'll get all-you-can-consume beverages for both days and built in best friends to fete with--because even strangers are united in nirvana.

Crawling out of bed at 2 a.m.--unless you never made it to sleep and are aiming for an all-nighter--following a mass of masqueraders all infected by the same madness, moving to the tune of soca music, pelting one another with paint, mud, oil or cocoa until no one recognizes themselves, is among the most raw adventures this festival offers. That's how Carnival gets started. Meaning daybreak, J'ouvert is the official opening ritual for the celebrated street parade, and is often considered the best bit. Being half-naked, slathered in dirt, drinking before dawn and dancing from dark to light, it seems, makes for quite a good time.

Trinidad Carnival amasses all the joy of best-time-ever moments with old friends, or strangers turned kindred spirits, and the rapture that comes with all-out liberation. The best things about Carnival in Trinidad are the people and the energy. It's pure joy. The masses unite in feting and friendship, celebrating together and enjoying those otherwise rare episodes of unadulterated ecstasy.

Feting for Carnival is an ongoing business of bacchanal--your stamina will be tested. If you do it right, in the days leading up to the main event, you'll sleep in, head to a daytime fete around 2:00 p.m. and revel with until the sun settles. Then, you'll make a pit stop for nosh and a nap before a seaside bash like A.M. Beach around midnight, where you'll while away time wining (gyrating your hips) and watching the sun rise. Should you have exemplary party prowess, carry on to a breakfast fete and chow on doubles (curried channa served between two pieces of fried bread) before staggering home to start the process again.

You could reasonably spend all of your money buying drinks until you're just the right amount of happy, but there's little fun in that and your finances would likely suffer. In Trinidad, many fetes and some of the masquerade bands you parade with come all-inclusive, meaning you pay once while un-inebriated, and then drink your fill for the duration of said event. Order top shelf scotch, local beers like Stag, refresh with coconut water to stave off fatigue and grab drinks for the overabundance of Carnival cuties.

Tara is a Brooklyn-based travel writer and editor