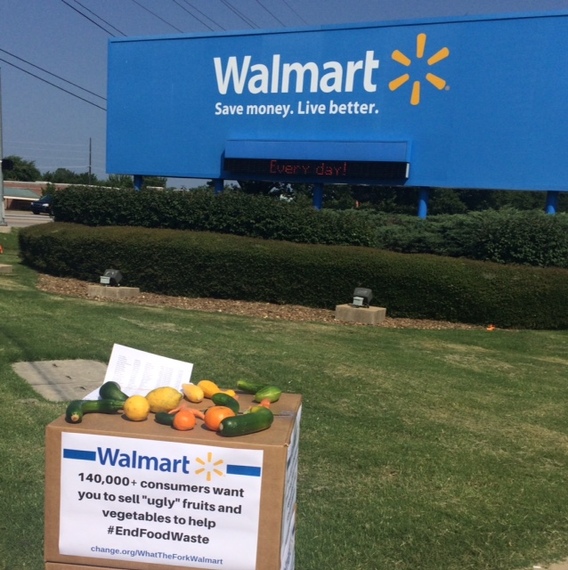 On Tuesday July 20th, thanks to an overwhelming crowdfunding effort, I delivered the Change.org #WhatTheFork Walmart petition, complete with over 140,000 signatures of support, to Walmart staff in Bentonville, Arkansas. After delivering the petition, I was also fortunate to have a "closed door" meeting with public relations and sustainability staff at the retail giant's Home Office (Headquarters) in Bentonville. And while I was appreciative and fortunate for these things, I was also disappointed.

Yes, just six days before the petition delivery Walmart announced their recent "ugly" potato Spuglies sales in 400 stores in and surrounding Texas. And, yes, just the day before the petition delivery, Walmart announced their I'm Perfect apple sales in 300 stores in Florida. However, there are quite a few things that have come up, at the July 20th meeting in Bentonville and in the last couple weeks, that leave me disappointed. Disappointed because Walmart's plans with "ugly" produce may not be what they seem and here's my top five reasons why:

1. Incorporating "Ugly" Produce into Other Products: one thing that Walmart is trumpeting lately in the press is that they work to incorporate "ugly" produce into processed items like pies, juice, etc. This happens everywhere, especially with grocers that have in-house products or brands (like Walmart does) and this method of "ugly" produce use is obviously not enough, see number 3 below for why.

2. Working with Farmers on 100% of the Harvest: you also will find Walmart explaining to reporters that they try to work with farmers on "100% of the harvest." The problem may be Walmart's wording which effectively side-steps the issue in that "the harvest" is not where the biggest issue lies. The biggest problem is what's left on the farm, left in the field, because it didn't meet cosmetic standards to actually be harvested.

3. Not Acknowledging the Real Problem: in their July 11, 2016 sustainability blog Walmart tries to diminish the "ugly" produce issue by saying that "ugly" produce "items usually make up a very small part of a harvest and aren't a major contributor to food waste " This is simply not true or again, side-stepping the issue. The U.S.-based ReFED report shows that 20 billion pounds of produce, consisting mostly of perfectly nutritious and delicious produce, that looks less than "perfect," is wasted, before stores in the U.S., every 12 months!

4. Removing The Problem: check several recent articles (NPR, Sustainable Brands, etc) and you'll find "For apples, blemish-related losses can reach as high as 30 percent, according to data Walmart cites from Columbia Marketing International." A fact that underscores the potential, and need, for a long-term commitment (to at least the apples!) being sold all over the U.S. at some point. However, when you go back and check Walmart's blog on the I'm Perfect apples effort, the "30%" figure which originally appeared there, has been removed.

5. No Commitment to "Ugly" Produce Programs: with the Spuglies and I'm Perfect efforts, Walmart did not commit to developing a program like other U.S. grocers have. They didn't commit to finding additional weather-blemished items to sell this year. They didn't even commit to continuing to sell the weather-blemished apples and potatoes, through the same suppliers, every year in some capacity (I know because I asked all of three these questions in my meeting with them on July 20th).

The bottom line with Walmart's current strategy is that they have no stake in the new efforts, they can cancel at any time, leaving the farmers to find a new avenue for these items in future years of weather blemishes or other causes to get the produce rejected. And that is falling short as "ugly" produce programs, that strive for all year-round supply of some form, can and should be developed with every large grocer, including the largest in the U.S. Walmart.

Where might you find ugly produce programs all year-round? In less than 2 years, the following programs have started up (with most starting in the last year): Giant Eagle (supermarket) in Pennsylvania and Ohio, Hannaford (supermarket) in New York, Hungry Harvest (home delivery) in the Northeast, Imperfect Produce (home delivery and working with grocers) in California, Perfectly Imperfect (home delivery) in Ohio and Whole Foods Market (supermarket) in California (and now in New York as well). And every single one of these programs sells for a discount of 20-50% off (or more) and stocks a program of multiple items all year-round!

So despite what Walmart and others may say about the lack of supply, there is no doubt that supply of "ugly" produce is there, you just have to work for it. Work for it as the recently expanded programs with Hungry Harvest, Imperfect Produce, Giant Eagle, and Whole Foods Market have and will continue to do. Even further, I have faith, and now the citizen demand to back it up, that citizens want ugly produce programs everywhere in the U.S. and they will buy ugly produce (for that discount). The more than 250,000 signatures on two petitions that myself and Stefanie Sacks have started, to Walmart and Whole Foods shows that.

This is why Stefanie and I are holding firm with our petition to ask Walmart to sell ugly produce in its U.S. stores in an actual program, or test pilot with the intention of working out a full program. So please, help us do more about ugly produce. You can do that by checking out my previous blog Ugly Fruit - The 20 Billion Pound Elephant in the Room by following my @UglyFruitAndVeg social media accounts to join in the #Funactivism! And lastly, by signing our petition to Walmart because we need real commitments from large grocers on this issue!