"Do migrants take the jobs of natives?" That is the perpetual question that all countries (politicians and natives) ask. Fortunately, migration economics has an answer based on research and international evidence.

In my World of Labor article "Do migrants take the jobs of native workers?" I lay down the pros and cons of the impact of migration on natives and show that 'migrants rarely take native workers' jobs, and indeed they tend to boost employment effects in the long term.' The five reasons are: a) self-employed migrants directly create new jobs; b) migrant innovators indirectly create jobs; c) new migrants fill labor shortages and lubricate the labor markets; d) the high-skilled contribute to technological adaptation and the low-skilled to occupational mobility, specialization, and human capital creation thus creating new jobs; e) by raising demand, immigrants cause firms to expand and hire more workers.

Public opinion research carried out in the U.S., France, Germany and the UK after the 2008-2009 recession also supports that finding. Accordingly, most people believe that immigrants fill job vacancies and many believe that they create jobs, rather than taking jobs away from native workers (see Figure 1). 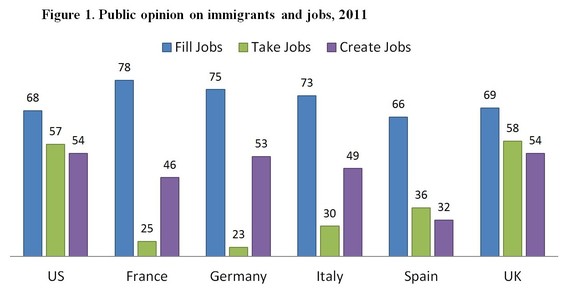 Economic migrants are looking for economic opportunities, meaning jobs, and so they tend to choose locations where jobs are readily available. Whether they are high or low-skilled, migrants rarely substitute for native workers. Instead migrants often complement native workers or accept jobs that natives don't want or can't do. Immigrants create new jobs by increasing production, engaging in self-employment, and easing upward job mobility for native workers. The mere presence of immigrants increases demand in the economy and can spur new businesses to open, creating more jobs for both immigrant and native populations.

So where does this anxiety about migrant workers come from? The simple labor market model of demand and supply assumes that migrants are exactly the same workers as natives, with the same skills, education, and talents, and thus, their arrival increases the supply of labor. The irrefutable prediction of this model is that the wages of all workers go down and unemployment increases for all, as the market for labor becomes saturated in the short-run.

The reality is somewhat different: native workers and migrants differ in their country-specific human capital, such as language fluency, professional networks, and social and cultural knowledge. Initial skill differences make new immigrants imperfect substitutes for native labor. In addition, we all know that labor shortages and job vacancies can co-exist. Vacancies exist even under high unemployment because of mismatches between job opportunities and the ability (qualifications) or willingness of natives to fill those jobs.

Regarding repetitive low-skill jobs -- and in countries with a strong welfare state -- native workers often may choose to stay unemployed. However, while those same jobs may be below the skill levels of migrants as well, migrants are often willing to accept these jobs in order to seize the opportunity that a new country offers them. Besides, immigrants view low-skill jobs as temporary and a means to the end, usually do not qualify for welfare upon arrival, and often identify with their home country so their pride is not hurt.

At higher skill-level jobs, vacancies can also exist in the short-run because the native labor force might not be qualified as could be the case for example of opportunities arising from rapid technological advances. Here, hiring qualified immigrant workers can fill the gap. Immigrants are also more likely than natives to start a business and create their own jobs at the very least.

Immigrants as consumers increase the demand for goods and services. This higher demand in turn affects the labor market by boosting the demand for labor, leading to an increase in equilibrium employment.

In summary, the quantitative evidence shows that, overall, immigrants do not take native workers' jobs in the long term and that they stimulate job creation through increased production, self-employment, entrepreneurship and innovation. Evidence also shows that for the most part, these findings align with public opinion in developed countries.

Professor Amelie F. Constant, is Program Director at the Institute for the Study of Labor (IZA) www.iza.org/home/constant, Visiting Professor at the George Washington University and Temple University, and an Editor of the IZA Journal of Migration www.izajom.com.