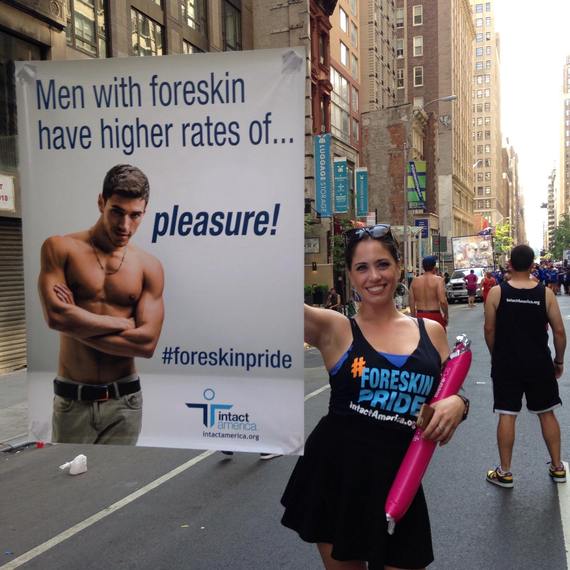 Last month, Intact America proudly marched in New York City Pride for the 11th year in a row. In an event already known for being outrageous, our big, bold float created quite a stir. Banners proclaiming "#ForeskinPride" and "Men with foreskin don't have higher rates of anything...except pleasure" astonished, and then quickly delighted onlookers. As our dancers and supporters passed out condoms and other swag, and the incomparable blues powerhouse Ms. Blu sang and extolled the value of the foreskin to the crowd, parade watchers welcomed us with open arms.

In stark contrast to all the fun and frivolity we experienced at Pride, the straight world is not always so welcoming. In other settings, intactivists are often met with derision or dismissed outright as crackpots. But the LGBTQ community "gets" why we do what we do, and why the anti-circumcision movement is so important. We've noticed there are five basic reasons for the strong affinity, summed up below

1. We don't mess with Mother Nature.
For decades, the LGBTQ community has fought for the basic human right of all people to be who they are. Intact America celebrates the right of every child - male, female, or intersex - to keep and enjoy the whole body that nature gave them. LBGTQ supporters and intactivists share a common belief that babies are born perfect, and that it is wrong to surgically remove a perfectly normal part of a baby boy's body to fit cultural norms.

2. We are outsiders.
The LGBTQ community gets what it is to be an outsider. For years, people opposed to involuntary circumcision have been denied participation in baby fairs, medical conventions, children's rights groups, and even organizations that work to end female genital mutilation. Those groups fear we are "too controversial, too confrontational, and too challenging" of a medical establishment that promotes and profits from medically unnecessary surgery. The LGBTQ community understands what it's like to be stigmatized, what it's like to have one's voice silenced or ignored for taking people out of their comfort zones, and how much hostility one faces by questioning what most people think is "normal" - if they think of it at all.

3. We have to come out of the closet!
Time and time again at Pride, and in our everyday conversations with people, we are thanked for taking the subject of circumcision "out of the closet." Circumcision is still a topic from which too many Americans shy away. Americans are uncomfortable talking about penises, intact or otherwise, but intactivism has made it okay to have adult conversations about penises, foreskins, and sexual pleasure. Ignorance is the real enemy here, because the more you know about circumcision, the more likely you are to oppose it. The LGBTQ community understands you have to take risk and step out of the closet to educate people in order for society to change.

4. We love our children.
Straight or gay, cis- or trans-gendered, we all are parents, grandparents, aunts, and uncles who want the best for our children. We know that strapping babies onto a restraint board and cutting off a body part, often without effective anesthesia, for no medical necessity is wrong. As David Grant, an extraordinary Intact America volunteer who has helped organize our Pride march for several years, says, "The LGBTQ community has always felt they were not getting the full story about circumcision, and what they were being told seemed so counter-intuitive to how we treat our children. They know this practice is wrong and are relieved that someone is speaking out against it."

I quote David again: "What the LGBTQ world needs to understand is that no matter how much your parents may have grown to love you just as you are, if there were some surgery at infancy that would ensure you grew up to be straight, there would simply be no LGBTQ community to celebrate at Pride. Parents would most likely alter you, and for the same reasons they circumcise their boys: culture, religion, and wanting us to fit within their comfort zone. Sorry, that's not for me and it's not for my LGBTQ family, either."

At Pride this year, we gave out three by five inch cards - the surface area of the adult male foreskin, which has highly sensitive nerve receptors both inside and out - with instructions on how to make a "fauxskin." (1. Fold the card lengthwise. 2. Roll it into a tube. 3. Woo Hoo!) It certainly got our point across.

David explains: "Foreskin is a glorious thing; it's a 'transformer-penis,' with many different moods and looks during various stages of erection and gives you more options sexually. Cutting it off basically reduces the function of the penis to its most basic abilities: peeing and procreation."

We will keep marching.
LBGTQ activists invited us to participate in Pride back in 2006 and we have been marching ever since. This year was our best Pride march ever. We felt a definite difference - more real curiosity, more openness, more acceptance, more love from the crowd as we celebrated the wonders of the foreskin. Intactivists spend a lot of time protesting, demonstrating, and getting angry. It is such a joy to be on the street smiling and dancing while spreading our message. Isn't it time other groups invite us in and listen to what we have to say with an open mind? We are ready to talk to anyone about why we celebrate #ForeskinPride, and everybody's right to be Whole, Out, and Proud. Are you?

I am the executive director of Intact America, and the president and CEO of the Hudson Center for Health Equity and Quality.