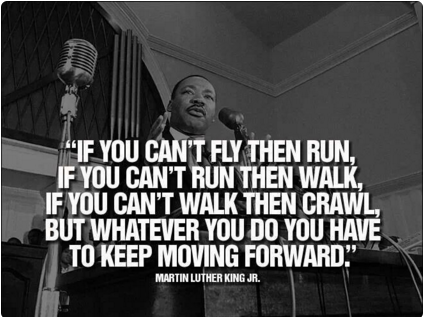 In January, we celebrate the work and legacy of Dr. Martin Luther King, Jr., and in his memory, we reflect on the civil rights victories achieved and the ones still yet to be made. As we've seen over the past 18 months, there is still much work to be done in securing equality for black Americans and other historically disadvantaged groups, and gratefully, the conversation is changing.

But one of the most pressing civil rights issues of our time is one you might not even think of in these terms -- even though it's a serious challenge that affects one in every four Americans. Like many other civil rights issues before it, we shy away from talking about it openly and candidly. It is something that, although systemic, we don't even think about as a civil rights issue. That is because the topic of mental health, of brain health, is still relegated to the shadows.

In the spirit of the fearless civil rights crusader of love, we honor Dr. Martin Luther King, Jr. Day by spotlighting the five ways mental health is a hidden civil rights issue.

In 2008, the Mental Health Parity and Addiction Equality Act was passed with the aim of providing equal coverage of treatment for mental illness and addiction. However, many people are still denied equal access to mental health care, and there are still plenty of health plans that are not obligated to follow parity law. A Pew Charitable Trusts report found that patients seeking mental health care were twice as likely to be denied coverage as patients seeking other comparable medical services. And what's more, funding for mental health is but a small fraction of the funding allocated for other diseases. In 2013, for example, the budget for the National Cancer Institute was over three times more than the budget for the National Institute of Mental Health. Doesn't the brain, as an organ in the body, deserve equal medical treatment?

Like many civil rights injustices, children are often the ones most gravely affected. Inadequate resources in schools means that students with brain-based behavioral challenges are often sent directly through the school-to-prison pipeline -- and are punished rather than treated. In 2012, of the under-18 population with a mental health disorder, only one-fourth of children received the treatment they needed. Minority children, in particular, were far less likely to get care. Further research has shown that 65% of boys and 75% of girls held in juvenile detention facilities have been diagnosed with at least one mental health disorder. Instead of helping treat children with brain health issues, we're sending them directly to prison.

Similarly, we don't know how to approach or respond to individuals experiencing mental health distress. Instead of sending ambulances or mental health professionals to the site of a person in crisis, we often send police who are unequipped and untrained to handle these situations -- with often devastating results, as we saw in Chicago with the tragic deaths of Quintonio LeGrier and Bettie Jones. The Washington Post recently released a report showing that more than one-fourth of the 424 people shot and killed by police this year demonstrated signs of mental health distress.

We've all heard the words, and have heard them used as insults -- crazy, psycho, schizo, ADD, OCD, bipolar. When you have a brain health condition and you hear these terms being thrown around casually, you feel the toxic effects of isolation and shame more intensely, which can often worsen symptoms.

I wrote an article last month about the troubling responses to Sinéad O'Connor's Facebook posts detailing her mental health crisis -- and specifically called on the media to start talking about mental health with respect. We would never point fingers and laugh at someone with heart disease or cancer. Individuals with brain health challenges should be afforded the same dignity.

Mental health disorders affect us all. But we walk past people in crisis, we ignore those in our immediate communities, including friends and family. We let the stigma overshadow our compassion, and this is the most insidious manifestation of discrimination. We need to wake up out of our paralysis and take action. We need to take a lesson from organizations like The Kennedy Forum's
Now Campaign
and make mental health a national issue. What would the world look like if we had not let James Holmes or Adam Lanza fall through the cracks of our medical, educational, and judicial systems?

On this day of hope, light, and community, we need to ask ourselves this question all the more readily. As we commemorate the fight for equality for black Americans -- it is important to remember how inequality in the mental health system often impacts the black community. African-Americans are 20% more likely to experience serious mental health disorders than white Americans, and are 40% less likely to receive care than white Americans. There are many factors at play here and systemic racism has a huge role in the disparity.

When it comes to the dismal state of mental health in this country, no one is immune to these potentially life threatening conditions. Therefore, in the words of Dr. Martin Luther King, Jr., we need "to feel the fierce urgency of now" and take action with our vote, our time, and our hearts. Let's face this civil rights issue head on!