Let's just admit this right now: Reading books such as Crime and Punishment, A Clockwork Orange and Ulysses is sometimes an uphill trek that doesn't seem worth the itchy eyes, aching brain and mystified imagination. Our minds are turned inside out like a limp graphic t-shirt going in the washing machine because of the complicated diction, not entirely relatable metaphors and abstract plot.

At least for me, I have to alternate between reading "heavy" books (i.e. Lolita, Wuthering Heights, etc) and "light," fun books that are not hard to read, don't make me spiral off into an existential crisis and/or don't cause me to curl up in a ball in my closet and question reality (*just kidding*).

These distractions or "blissfully fluffy" novels flirt with the romance, young adult and children genres, but that doesn't mean their literary worth should be discounted. Quite the contrary. After reading Love, Ruby Lavender, a children's novel by Deborah Wiles about a spunky Mississippi girl and her adventurous (and slightly gloomy) summer, I realized that kid's stories often go much deeper than they first appear on the surface. Sure, the book was overflowing with straightforward diction and childish activities, but I thought the main character, Ruby Lavender, was rather complex for a 9-year-old Southern bell. As it turns out (*spoiler alert*), innocent Ruby was grappling with the death of her grandfather for which she felt personally responsible.

I was under the impression that most children books were frivolous and juvenile, but clearly my condescension was an affront to this special subset of literature. It was definitely a much needed break that released my mind from the shackles of confusing and metaphorical adult novels. As a teenager, being forced to constantly labor over high school novels can get dreary and depressing. The Great Gatsby? Things Fall Apart? The Scarlett Letter? While they are amazing and instructive, they also add several hues of gray to an already slightly morose adolescent world. On the other hand, sprinkling in a dash of throwback Thursday with children's novels such as The Boxcar Children and Judy Moody provides a diverting fantasyland away from the monotony of death, destruction and corrupted adults in literary masterpieces.

Besides, I was always told that no matter the content, whether it be Ode to a Grecian Urn, People Magazine, Thus Spoke Zarathustra, Fifty Shades of Gray, or Harry Potter, reading anything was beneficial and stimulating to anyone with a zest (or not) for words. 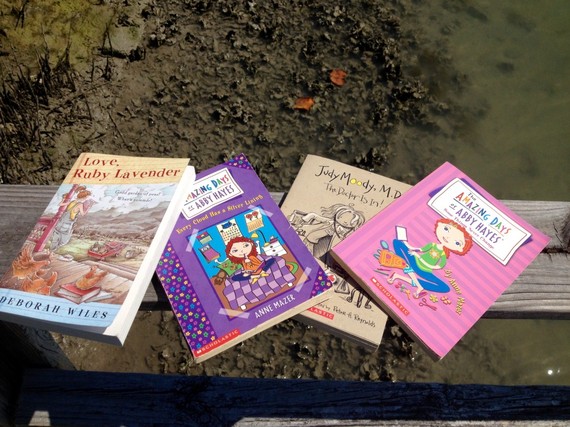 Five Reasons Why Reading Children's Novels as a Teenager is Paradoxically Enlightening:

1. The words are often simpler to comprehend. While this may not always be a good thing for an AP English Language student, it is helpful to devour easier literature after going to school with hormone-ridden barbarians, doing four hours of homework AND killing one's eyes with analyzing celebrity Twitter feeds. Better to read something than to not read at all.

2. It takes less time overall to read; this way, a student can squeeze in three or four children's books whereas they could only handle one adult classic in the same period of time.

3. While the characters are less complex, they have several characteristics that make them understandable and relatable. To be honest, I couldn't relate to Raskolnikov or Catherine Earnshaw. However, I was able to envision myself as a 9-year-old again dealing with nasty girls and unruly hair in Love, Ruby Lavender.

4. It gives your mind a break while still flexing your reading muscles. Tis' true that reading The Amazing Days of Abby Hayes won't magically develop attractive literary abs, but it will prevent all the brain flab from building up until you don't remember the definition of "macabre" anymore.

5. The morals in young children's books are usually black and white -- after all, it's difficult for a third grader to truly comprehend the weighty issues presented in brutal novels such as A Clockwork Orange. Yes, the overall message may be simplistic and somehow below us "seasoned" adults, but I take stock in it nonetheless. What's wrong with a story in which the mean girl with the bouncy curls and Mary Jane's becomes friends with the harebrained, but good-natured protagonist? Or what's wrong with a young girl loving her mom and grandmother and always respecting them because they are her elders? Absolutely nothing. My grandfather always says emphatically "Keep it simple, stupid," and I couldn't agree more wholeheartedly.

Overall, I think revisiting those novels of our childhood that first started our craving to read is an excellent idea. They provide a breath of childish air for all those academic brains that think anything other than Kafka or Dostoyevsky is a waste of time (which it's not!) If I'm taking the time to write about a 9-year-old character and how I keep dwelling upon her life, then obviously children stories aren't just for tree-climbing, ice cream lickin' and messy haired youths -- they can teach anyone a lesson if they are willing to regress to their childhood frame of mind for a few well wasted hours.

Accounting student at the University of Florida