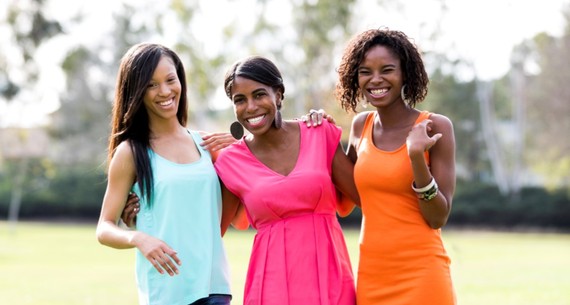 Sisterhood is important. Why?

1. Sisters in the sisterhood understand. To share the thoughts and feelings of your honest, authentic self is one of the best benefits of sisterhood. Our sisterhood is our safe space to share and heal, especially useful when it feels like to world is against you. To call another woman a sister is to say, "I trust you", "I have your back", "Your feelings are valid", and "I believe in you."

3. Empowered sisters are superwomen. Don't believe me? William Moulton Marston, an American psychologist and writer credited for inventing the polygraph (forerunner to Wonder Woman's magic lasso), struck upon an idea for a new kind of superhero, one who would triumph not with fists or firepower, but with love. "Fine," said Elizabeth, his wife. "But make her a woman."

The superhero that Marston created became known as Wonder Woman. We can look at Wonder Woman as an archetype of female empowerment. In the comics and also in an older television series, Wonder Woman is portrayed as a superheroine. Created by Marston and published by DC Comics, Wonder Woman fights for justice, love, peace, and gender equality. Wonder Woman is a warrior princess of the Amazons tribe, native to Paradise Island, a secluded island in the middle of a vast ocean. In her homeland, Wonder Woman is a Princess, known as Princess Diana of Themyscira.

A little-known fact: Nubia was Wonder Woman's Black sister, created from black clay, just as Diana was created from white clay. Like Diana, Nubia, appearing in almost twenty DC Comics issues, has superhuman strength. Nubia also possessed a magic sword, the only weapon on Earth that could counteract Diana's magic lasso. She could also glide on air currents. Nubia's magical armor with a raised embossed lion's head on its breastplate enabled her to time travel to mystical realms.

4. The sisterhood has secrets. You have to be a sister in the sisterhood to know each other's secret identity and special talents. Diana Prince is Wonder Woman's cover to protect her secret identity. Wonder Woman is gifted with a wide range of superhuman powers along with superior combat and battle skills. She possesses an arsenal of weapons which include the Lasso of Truth, a pair of indestructible bracelets, a tiara which serves as a projectile, and, in some stories, an invisible airplane.

5. Mentoring girls is an important part of the sisterhood. Our sisterhood must be intergenerational and diverse to grow and continue positive social change. We need more women like Nubia and Wonder Woman and they were groomed to be empowered superwomen sisters from birth. We all have the capacity to be them with a collective responsibility to promote justice, love, peace, gender and racial equality.

Our sisterhood is our tribe and each of us is gifted with something unique, our own arsenal of knowledge, skills, and weapons (not literally, but figuratively) to assist us in our mission. Our tribe is a diverse sisterhood exemplified in the many ages, shapes, colors, and textures of our physical selves.

In this world of fiction, the Amazons are a healthy matriarchal tribe. Some of them have titles and there is a hierarchy, but they simultaneously respect, assist, and care for each other as sisters while co-existing with men. Women in the sisterhood are beautiful, talented, and powerful. Why does this world have to be fictitious? With sisterhood, we can manifest this reality of empowered femininity within our communities.

Angela D. Coleman is the founding President of Sisterhood Agenda. This post contains excerpts from her book, Black Girls Guide: How to Be a Sister.