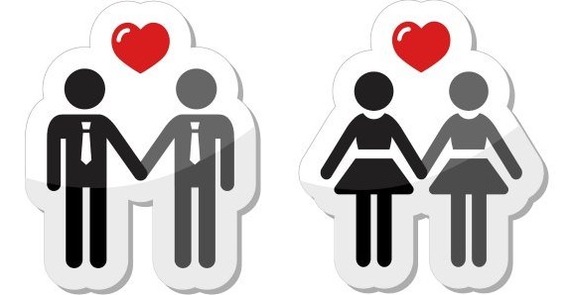 Relationships are challenging. They are not for the faint hearted. I just spent a month disseminating relationship and dating advice to 8 single celebrities for E! Network's new show, Famously Single (airing this spring), and I walked away feeling crystal clear that as members of the LGBT community, we definitely have our own set of challenges when it comes to dating and relationships. In an effort to help you bypass some of the most common mistakes our peeps make, I've compiled a list of my 5 BIGGEST rules to follow:

1. Be Equally Out or Closeted. You should only date people who are exactly where you are on the Coming Out Spectrum. To date someone who is at a different phase of coming out than you are will create a power struggle. The person who is further along in coming out will invariably be dissatisfied with the more closeted partner. I've seen it hundreds of times and it's always the same story, though each couple hopes theirs will result in a different outcome, with the closeted partner assuring the out partner that she will eventually come out but that she's just more of a 'private' person, and the out partner swearing that she doesn't even care if her partner comes out -- the important thing is that they're together. This. Never. Works.

What happens is that both partners become fixed in their respective positions which results in a power struggle between the couple which then causes them to reach out to me for therapy and since I would rather walk through fire than deal with a couple, I send them to my wife, the Imago therapist.

2. Spend Nights Apart. We don't get Boys' Night Out or Girls' Night Out by virtue of needing time alone with our same-sex friends because, well, we're in a relationship with someone of the same sex. Which is precisely why it's imperative that you establish a night alone from the beginning. I've seen so many clients who have been in a relationship for a year or more who wish they'd established this habit early on so that it didn't feel like it was some sort of rejection of their partner later in the game. Time alone is one of the most important elements needed for sustaining a relationship. You need new stories to bring to your partner. It's how we keep excitement in the relationship.

3. Offer To Pay -- Both of you. You're the same sex, and until you've established a system for who pays for what, you both need to offer to pay.

4. Do Not Talk About Your Ex. The heteros seem to understand this intuitively. We can learn from them. No one wants to hear your war stories. Specifically, don't reference how they were in bed or how devastating the breakup was. I'm cringing just thinking about it.

5. I have to split the sexes here:
WOMEN: Resist the urge to merge. Do not U-haul for a minimum of a year. I don't care if you live in Manhattan and it just makes financial sense. It's a recipe for disaster. Please. We can change this stereotype. And yes, I broke my own rule and u-hauled early on. I'm a lucky one. Do as I say... I've seen it backfire more times than not.

MEN: Label it. Call it what it is. If you want an open relationship, clearly express it to your partner; likewise if you want a monogamous relationship. If you're somewhere in the middle -- say, you'd like to have sex with other partners but only with each other in the context of a 3-way, clarify that. I don't care what your relationship model is. I'm open to all. But only with 100 percent honesty.

So there you have it. Want to learn how to Master Relationships? Click HERE to immediately download my 5 Tips For FABULOUS Relationships!