When I fly, I'm usually not the one looking out the window as we start the descent. But as São Miguel island came into sight, I couldn't stop staring at the breathtakingly green island scattered with craggy mountains and sapphire lakes. By the time we actually landed, I couldn't wait to get on the road. Formed by lava from the ocean floor, the Azores Islands (Os Açores) are a largely unspoiled volcanic archipelago of nine islands located around 1400 km from mainland Portugal, too small to notice on Google Maps unless you zoom in (way in). A location above three major tectonic plates makes the Azores a prime spot for volcanic activity, although its volcanos are currently dormant. Is there a more thrilling place for a road trip? 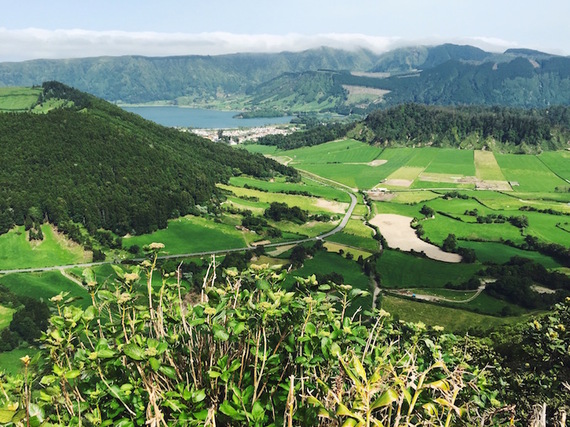 View of Sete Cidades from the rim; photo by Katy Miller

Not in my opinion. São Miguel (the largest of these islands) is filled with splendid miradouros (viewpoints), winding coastal roads, volcanic craters, vibrant foliage, whale-watching opportunities, and abundant hiking trails, making it an ideal trip for nature-lovers. But the best part is the impression of solitude -- my partner and I felt almost as if we had the entire place to ourselves. (The other best part is that the Azores are a cheap holiday destination like the rest of Portugal.)

Here are just a few of the exciting experiences the "Green Island" has to offer:

1. DIPPING INTO THE HOT SPRINGS AT PONTA DA FERRARIA 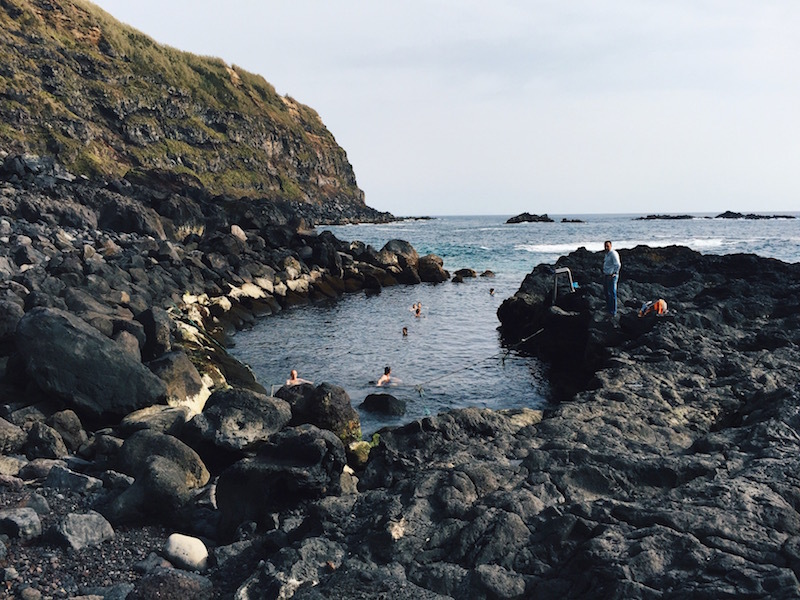 This incredible spot on the western coast (near Ginetes) was our first stop in São Miguel. Fed by a spring of volcanic thermal water, it is the only geological formation of its kind in the world. A slimy medal ladder, overgrown with algae, provides access into the natural pool which becomes the perfect hot tub at low tide. Steam rises from the harsh volcanic rocks surrounding it, and a tattered rope criss-crosses the surface for bathers to cling onto when crashing waves threaten to knock you off your feet. The water is piping hot furthest away from the mouth of the pool and becomes cooler the closer toward the ocean you go. Do be cautious not to lean up against too many algae-covered rocks unless you want to stain your bathing suit. For the best experience, make sure you visit when the tide is low for the warmest water.

2. CIRCLING THE CRATER OF SETE CIDADES 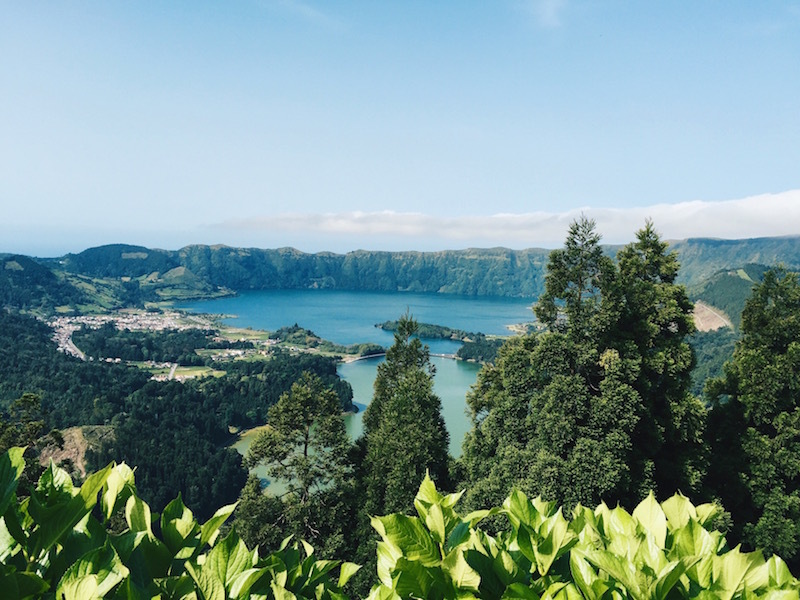 The largest freshwater lake in the Azores, Lagoa das Sete Cidades, lies in a massive volcanic crater and consists of two lakes -- Lagoa Azul and Lagoa Verde. The lakes are best visited on a clear day to appreciate their truly spectacular nature (and to distinguish between their blue and green hues), and there are several hiking trails if you want to further explore this protected landscape. We set off for the Vista do Rei viewpoint in the tiniest of SmartCars, though the terrain was a bit demanding for such a miniature vehicle. Following the signs led us onto a steep and narrow dirt road on the crater's rim. The exhilarating sights include many a pastoral scene involving a meandering island cow amid the lush hills, not to mention the panoramic views of the crater itself.

3. HIKING AT LAGOA DO FOGO 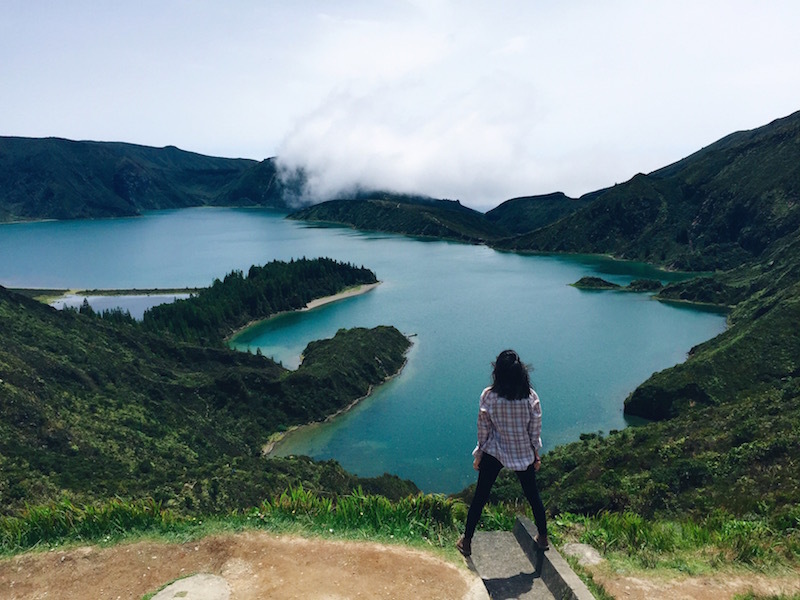 Fog, even on a clear day at Lagoa do Fogo; photo by Tim O'Brien

This indisputably beautiful "Lagoon of Fire" (not Lagoon of Fog, although you'd be justified in making that assumption) has my pick for São Miguel's best. The drive up the windy, mountain roads is lovely as the vegetation changes with the altitude. Lying in São Miguel's central collapsed caldera and circled by mountains and small beaches, Lagoa do Fogo is the image I'll think of now when I hear "natural wonder." There are several hikes you can do around the lake including a 13 km day hike and a short one (2 km) that goes straight down to the lake on a rocky path from the car park. We picnicked near the ridge, paying more attention to the view than to our sandwiches before heading down the rocky path to the lake's base.

4. WATCHING THE GEYSERS AT FURNAS 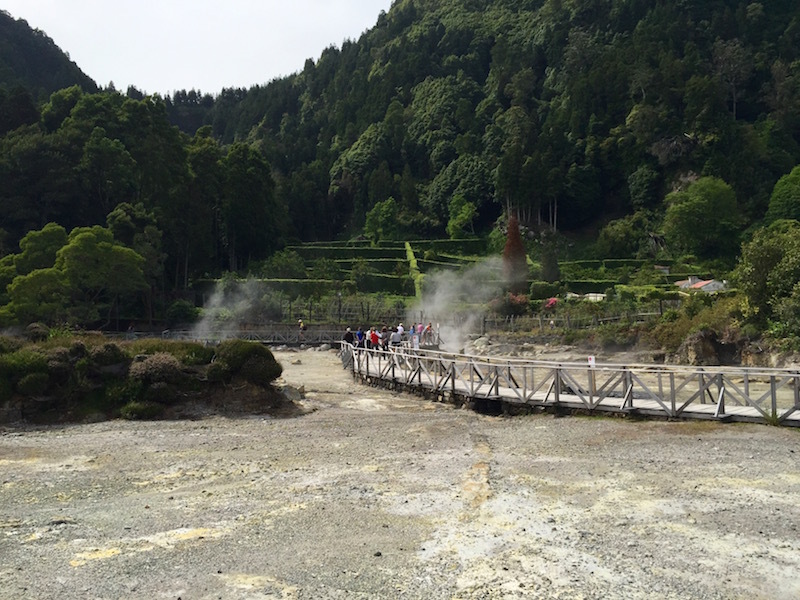 Be warned, these sulfurous boiling geysers are smelly. Steam shoots up from hissing cracks in the earth amid pools of boiling mud. At the Caldeiras das Furnas, you won't be forgetting you're on a volcanic island. There is a small entrance fee and you have to pay for parking, unlike any of the other places on this list. Restaurants in the town (Furnas) offer "cozido das furnas", a stew buried and roasted in the caldeiras, and you can also bring your own pot to the caldeiras for a fee of 3€. Nearby is Lagos das Furnas, another beautiful crater lake worth visiting or hiking, as well as the Terra Nostra Gardens. The town of Furnas itself is located inside a volcano complex, but fortunately it hasn't erupted since 1630. 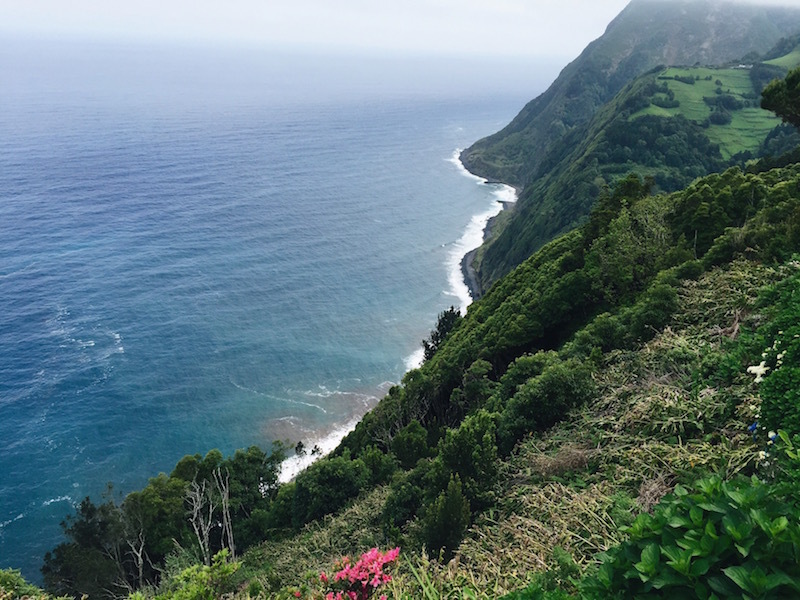 View from Ponta do Sossego; photo by Katy Miller

São Miguel's Nordeste Region (meaning "northeast" in Portuguese) is a flowery gem studded with panoramic viewpoints. The best of these is Miradouro do Sossego, featuring a large and well-groomed garden with sweeping view of the coast and the mountains, as well as a picnic spot for lunch. Miradouro da Ponta da Madrugada is another beautiful lookout.

There are so many more things to do on the island -- for instance, we didn't get to see the Gorreana Tea plantations (Sao Miguel is the only place in Europe that produces tea) or visit the Gruta do Carvão cave system. We started to drive up into the Serra da Tronqueira mountains but eventually turned around when we realized the rock-and-dirt road would likely dent the rental car -- I hope there's a next time! 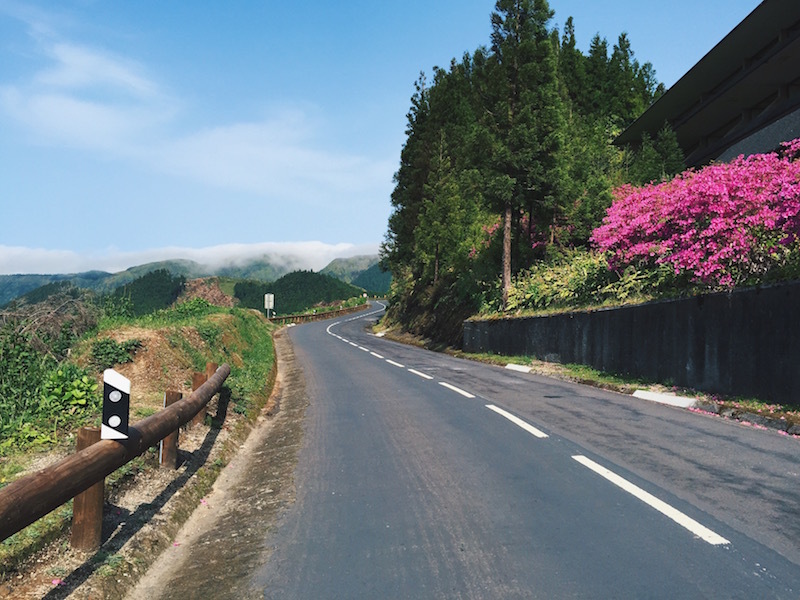 Near Vista do Rei; photo by Katy Miller

Get In: SATA and TAP Portugal operate most of the flights to and from São Miguel's capital Ponta Delgada (arriving from Europe and North America). From Lisbon, you can also fly on budget airline EasyJet, and RyanAir services both Lisbon and London.

Stay: Through Airbnb, we stayed in a wonderful converted barn in rural Ginetes on the west side of the island. If you want to be more central or near restaurants, you can always choose a hotel in Ponta Delgada or Ribeira Grande.

Get Around: Renting a vehicle at the airport is by far the simplest option, but São Miguel also has an accessible bus system.