With the filming of Shark Tank Season 7 well underway in Los Angeles, I've been getting asked the same question every day: "What does it take to get a deal?"

The short answer is, it's not that simple. Over the past seven years of filming, we've seen some great ideas walk out of the tank without a cent, and some bizarre concepts leave with six figures in their pocket and a shark on their side.

That said, there are a few things that all great pitches have in common.

1. A Great Story With a Great Ending

This is a key distinction. In other words, no matter how lucrative the deal, it will not make it to air if it's boring, if it lacks the essential ingredients that make unforgettable television.

Each pitch must tell a story about money: the lack of it, the need for it and how it can be made. As a born marketer and salesman, I tell my employees all the time: if you cannot tell the story and put your prospective customer into the narrative of our financial products, you will fail. Good TV is no different from good storytelling.

Oh and you better be able to get your story out in less than 90 seconds, or you can pack your bags because my money's already looking somewhere else.

Sara and Josh Margulis pitch their honeymoon registry business before signing a deal with Kevin O'Leary.

Let's say an entrepreneur aces the introduction, articulates the opportunity, produces a terrific demo, and outlines a competent business plan. Next, I ask myself: What about this entrepreneur? Does this person have the ability to execute? Can I ride this pony for a whole cycle, or do I have to whack the rider because he or she can't execute this great idea I've fallen in love with?

Good ideas are easy to come by -- great ideas, less so -- but execution is everything.

When I invest in an entrepreneur, I want a doer. Not a dreamer of a talk. I've seen way too many opportunities dry up because the entrepreneur is too ego-driven, too single-minded, or too scattered to pull it off.

Then on the flip side, there are the true champions, that rare breed of born entrepreneurs. They have all of the above elements, with an added power: the ability to withstand a barrage of questions like:

If you watch Shark Tank you'll see that when entrepreneurs understand these questions and give answers that are consistent, they get a deal. Almost always.

3. Know Your Numbers: ALL OF THEM

The single biggest mistake entrepreneurs make when they come to me for my money is not knowing their numbers. What do I mean by numbers? Here are just a few that you should know like your own name:

If you can't answer all of these questions, it tells me one thing: I can't invest. It won't just be unsafe -- it will be decimated. So as soon as somebody starts bumbling the numbers, I'm gone. 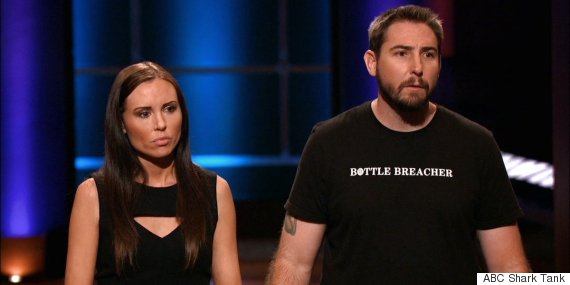 Jen and Eli Crane of Bottle Breacher, finalizing a Deal with Kevin O'Leary and Mark Cuban on Shark Tank Season 6.

4. Don't Be a Greedy Little Pig

Let's say you have a great idea. You may even have the beginnings of a good business. But when you want to give me only a 10 percent cut of the business, it's insulting.

We get entrepreneurs all the time who come into the tank asking for six figures, and offering less than 10 percent to us Sharks. These are often companies which have so far sold nothing and generated no profit, valuing their business at millions of dollars!

Why do people overvalue their companies? They have access to the same metrics as any entrepreneur. I think they lose all sense of proportion because they've been locked in a basement with an idea too long. Like Dr. Frankenstein, they've fallen in love with their monster, making it impossible to see its flaws and defects.

When pitchers on the show ask for giant sums of money for ideas that haven't even made a penny, I call them greedy little pigs. Maybe that sounds mean, but I hope that now that I've explained things, you can see there's truth in what I say.

But here's the cold hard truth about pigs: almost all of them eventually get slaughtered.

Another big mistake when it comes to pitching is over-sharing. For some reason, pitchers feel I need to know their medical history, their family's troubles, their dead dog's name, and the fact that their girlfriend dumped them days before they met me.

Here's the thing: I don't care.

Every once in a while, a pitcher commits the cardinal sin and crosses the line from emotionalism to full-on crying. That's when they lose control of the pitch. I've seen it happen countless times. I find it distasteful. It shows your weakness and it makes my money cling to my pant leg.

When it comes to the art of making money, the only currency outside of cash itself is speaking the truth about business. Comforting someone who's sunk a chunk of their family's savings into a ridiculous venture is true crime.

When you tell the truth to people, when you tell them to stop spending money on ridiculous ventures, it's deeply satisfying work because every now and then it happens: the light comes on behind their eyes.

Suddenly, the person realizes: I have wasted time and money on something that will never work. I have to stop. Now. Kevin O'Leary has saved me from ruination.

That's why they call me Mr. Wonderful.