There are a number of telltale signs that a radical science movement is bubbling at the surface, waiting to erupt much like a volcano, or a teenager dry-humping Sofia Vergara. Here are some reasons to believe that science is invading all our homes and that total dominance is imminent. Luckily for all, it's looking like this is just the beginning.

1. President Obama recently created the BRAIN Initiative, a large-scale multi-lab effort whose aim is to map every cell in the human brain. In 2014, the National Institutes of Health awarded $46 million in funding to over 100 scientists with the goal of advancing brain imaging technology. Progress in this area may allow scientists to observe changes in the activity of individual neurons during real-world interaction.

The hopes are that the initiative can be the brain's equivalent of the highly successful Human Genome Project. It's projected to spend at least over 300 million dollars per year over a 10-year period, and you can bet it'll be worth every penny. 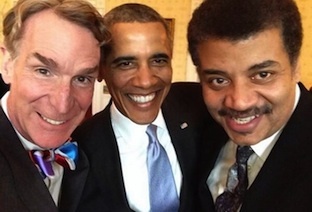 2. Google has appointed the brilliant inventor, futurist, and overall mad scientist Ray Kurzweil Director of Engineering. Kurzweil wants to see us transform ourselves into binary beings that transcend mortality, and now he's in a position of great power. I'm not sure whether to be excited or scared.

This is in addition to acquiring the services of virtually every notable machine-learning and robotics company out there, with the presumed goal of creating one giant-ass artificial intelligence lab like none seen before (Google recently spent $3.2 billion and $650 million on companies Nest Labs and Deepmind, respectively).

The below video features one of the many robots now owned by Google. It's one of the strangest I've seen and possibly the scariest. Its animal-like movements are a little creepy but cool as hell. He just sort of trots along like he knows he's the shit, powering through any terrain like an automated boss.

3. Facebook has paid a whopping $2 billion for the virtual reality company Oculus Rift, with the intent of eventually introducing a virtual social platform that can allow one to directly access entire experiences of others. Creepier than Google's robo-bull and just as amazing. Here's an Oculus reaction video that's almost too good to be true, and the faceplant is a true testimony to its realness.

4. In 2014, the award-winning science documentary TV series Cosmos invaded primetime television, catapulting host and famed astrophysicist Neil deGrasse Tyson to rockstar status virtually overnight. The Internet pop-culture icon is now a household name, and damn does that dude know how to make science sexy. Just look at those moves. MJ and JT's got nothing on NdGT.

The show has also been a success with the critics, racking up four Emmys including one for "Outstanding Writing In Non-fiction Programming". Unfortunately, Tyson won't be hosting Season 2, but with people like Michio Kaku and Bill Nye as contenders you can be sure it'll be another hit season.

5. Social media have proven to be a force to be reckoned with when it comes to promoting science awareness. The Facebook page "I Fucking Love Science" (or IFLS) has amassed nearly 20 million followers without expensive advertising or big celebrity endorsements, and is run by Elise Andrew, a 26-year-old Brit with a biology degree and some obvious marketing savvy. In addition to the Facebook page, she has created a popular website by the same name with its own writing staff, and there have been talks of an IFLS TV show coming to cable in the near future. 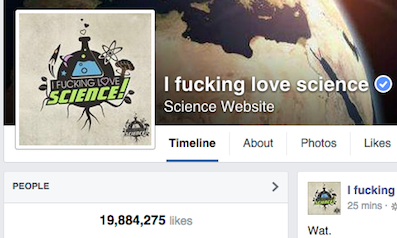 We're all still figuring the Internet out and this unpredictability is what makes such achievements possible. Since what gains popularity is decided in large by the people and not corporate sponsors, one thing is drastically clear: Internet users are hungry for science content and humor.

There's no doubt that science is blowing up like a nuclear reactor. Although nerds may have hoped for this day to come, I don't think anyone seriously expected it. But the smart revolution is really here, and the new cool is sexy science. This marks the beginning of a new era of enlightenment that will not only allow us to better understand ourselves, but also humanity's full potential. And for all you climate change deniers, evolution naysayers, and run-of-the-mill science haters, just know that resistance is futile. Join the brains and techies now or fade into irrelevance.