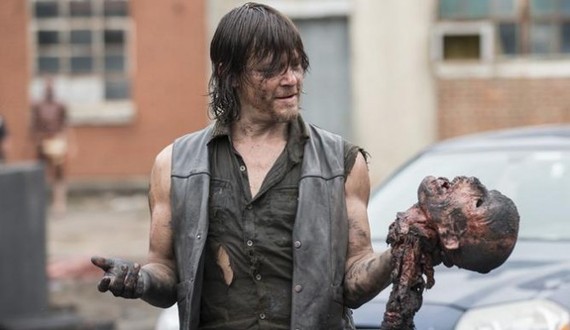 I fell in terror with The Walking Dead after Shane was killed (by Rick) at the end of Season 2. The zombie-apocalypse's bad-boy had been part of what I assumed would be the show's continuing narrative, the love triangle between him, Rick and Lori. I'd never read the graphic novels, so I was relying on the traditional arcs of TV dramas.

Most of the original cast has died since then (bye, Lori!), and what makes the show so palpable is its willingness to kill off major characters, bring in new ones, change locations, and follow-up with once-dropped storylines. Most dramas are afraid of such change. It's a nerve-wracking, tightly woven series, because like those survivors, you never know what, and who, is next.

Something bad happened on Season Six of cable TV's most popular show, and I'm not just talking about the survival of Carl. The writing got lazy and unhinged, with silly "tune in next week" Batman endings and major dramatic gaps, and so much sex in Alexandria City, it's like Desperate Housewives if Mary Alice physically strolled down Wisteria Lane.

I don't expect The Walking Dead's imminent cancellation anymore than I expect Daryl's imminent Day-of-Beauty spa treatment. And it still manages to create thrills. Regardless, if it keeps going downhill, I'll have to stop watching what used to be a Sunday favorite. Here, five reasons the Dead has stopped showing signs of life.

1. The Cheap-Ploy Cliffhangers: Sure, we all need a reason to get excited about next week's episode, but TWD is not only creating too many, the writers are also insulting the audience by not following through. Glenn's protracted guts or glory tease went on for weeks, and was made even more annoying by inserting the Morgan "Karate Apocalypse Kid" mini-movie in between. Most of us had figured out we'd been punked by the time Glenn's fate was resolved, but that didn't stop the creators from adding more dumb cliffhangers.

On the same episode that Glenn was left for dead, Rick was seen surrounded by walkers in such numbers an escape seemed impossible. How would he do it? Who knows. The next time Rick appeared he was running back to Alexandria, ahead of the herd.

On the second to last episode's ending, a gun went off behind Daryl with so much blood splattering it would be unfathomable that he'd survive. He did, somehow, but the details were lost because they only showed him later, alive, with some blood on his shoulder. To paraphrase Monty Python, "I guess it was just a flesh wound." The mid-season finale even had Jessie's son Sam scream out for his mom while navigating through a sea of Walkers, thus jeopardizing everyone's life. They ignored that scene when the series came back months later.

Setting up impossible endings and then not resolving them offends the viewers. It assumes they're too stupid to care, too forgetful, or just so in love with the show they'll forgive the lapses.

2. The Dumbing-Down of Characters: It took awhile for Rick and the Gang to navigate the new world order, but not very long to forget to keep their wits about them. If anyone kept count of how many times a character decided to wander off alone in search of a friend, supplies, revenge, or, heck, just for fun, send me an email -- I lost track. I know Rick loves Carol and Glenn loves Maggie and Morgan loves everybody, but what that camp really needs is the Governor's old guards to slug anyone who leaves camp. Remember when the original inhabitants of Alexandria were the naïve folks?

The second half of Season Six was a hodgepodge of characters running off into the Savior Sea, often just to prove a point. I loved Denise, but even her self-improvement supply run was so dense you could practically see the bulls-eye on her head -- oops.

3. The Peyton Place Subplots: I'm not sure what's in the zombie water, but after some time passed in Alexandria, and Carl managed to survive a gunshot wound to the eye with brain and bad hair intact, everyone fell madly in love. Michonne and Rick have zero sexual chemistry (she and Andrea had more spark), and their "Virginia Is for Lovers" scene -- I half-expected Starbucks coffee-foam-drinks -- was jarring.

Carol shacked up with one of the men from Alexandria without any notice (and with no time for us to care after it went awry), Spencer slept with Rosita, Denise and Tara were already hitched, and all the while Maggie and Glenn planned their happy little apocalyptic newcomer.

But the most senseless, bad soap opera love triangle took place between Rosita, Sasha, and Abraham. It wasn't just because Rosita's never had much of a role other than "Hot Hispanic Chick" or that, once again, Sasha and he have no chemistry, or that Abraham exudes about as much sex appeal as Eugene. The bigger problem was centralizing it into the storyline. Abraham is now contemplating settling down, and, frankly, there are more urgent matters to take care of inside the walls. Denise and Tara's gradual love felt more organic and understandably fragile, and the original love triangle was built into the show's premise, fraught with danger amid the world's cliffside precipice. The love plots are now sedentary.

4. Carol's Bizarre Transformation: Everyone's favorite cookie-baker monster-bedtime storyteller turned into Mother Trucking Teresa this season, complete with rosary beads and an Alexandria exit plan about as wise as George W. Bush's after Iraq. Here again, her transformation from survivalist to guilt-plagued Mom happened instantaneously, and defied her moralistic core. Carol is far too smart to leave camp in the middle of the night, because she'd know survival would be next to impossible and she'd know her friends would risk their lives to find her. And voila! Which brings us to...

5. The Season Finale: Let's see: Maggie's unborn baby is in trouble, while half the characters have already wandered off, a lunatic killer and his gang are seeking revenge and on the loose. What's the best plan? I know: Get in a camper and bring everyone along (save Gabriel and Spencer -- because they're qualified to keep Alexandria safe) to search for the doctor. And make sure to do it in broad daylight. Only Chevy Chase had a worse vacation.

By the time Negan finally showed up (Jeffrey Dean Morgan's deliciously evil entrance was the episode's highlight) to decimate one member of the gang, the only real surprise was which castaway he'd pick. It was a revelation the audience didn't get, yet again, because the show ended before the victim was revealed.

The shock-and-awe ending didn't work because the writers have lost our cliffhanger trust. Come October, when the show returns, I half expect to find that Negan's spiked club only grazed, say, Daryl, or ended up killing one of the saviors instead. Also, since some of the characters have never been fleshed out, their demise won't satisfy such a presumptuous finale. Rosita's still in search of a storyline, and Aaron, aka the gay character, came on the show and offended viewers who'd rather see two men kill than two men kiss, then slowly drifted off into the storyline abyss.

The Walking Dead built itself up as a show that allowed us the horror and grieving process of losing loved ones, unnecessarily and often without warning. Those deaths made us root for the survivors, forging ahead under impossible circumstances. Once the plots become teasers and the heroes turn irresponsible, the only thing left is to kill off the show. I hope when that death takes place at least the details are intact.