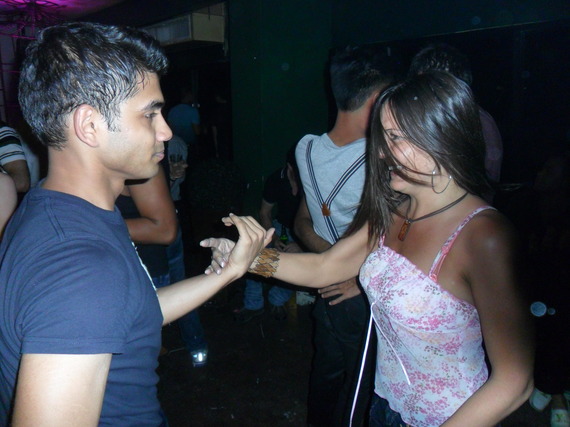 In fact, some of my most memorable (in a good way) nights out over the years have been nights out with straight women. That's why I used to get so turned off when bouncers at certain gay bars and clubs in New York City enforced strict men-only policies. (At Sircuit and The Peel in Melbourne, they often still do.) I once boycotted Sound Factory for months because the door man refused entry to my friend Laura and then tackled her boyfriend Brian when he protested too much.

I still can't condone that bouncer's violent outburst, but now I kind of understand where Sound Factory's powers that be were coming from. Ever since Will & Grace set a new standard for relationships between gay men and straight women by suggesting that our straight-female BFFs must be No. 1 in our lives, I've noticed an international trend of straight women increasingly dominating gay nightlife too.

Some girls, generally the ones with boyfriends or husbands at home, cheerfully observe from their place on the sidelines. They come strictly to hang out with their gay friends or to avoid the obnoxious men who stalk straight clubs. Then there are the ones who give straight women in gay bars a bad name. They're usually single, and they're always angling for center stage. It's like they're secretly hoping to lure the one straight guy who might be there on the same night, or perhaps luck out and succeed at "turning" one of us. Which brings me to the first rule...

1. If you're up all night to get lucky, you should probably test your endurance elsewhere. Once, at the entrance to DJ Station in Bangkok, I met a British Airways flight attendant and Katy Perry lookalike who immediately left her gay colleagues at the door and dragged me to the dance floor. As the music pounded and Rihanna pleaded, she moved closer and closer. Somewhere around "'Cause I'm the only one who understands how to make you feel like a man," she stuck her tongue down my throat.

"What are you doing?" I asked, gently pushing her away.

She grabbed me and tried to suck my face again.

"You know this is a gay club, right?"

"I'm sure they would. But look around. None of them are here."

I'm not the kind of guy who regularly gets into bar altercations, but I'm two for two the last two times I went out in Cape Town, and all three showdowns were with women, queen bees who were either wielding cigarettes like weapons or thought it was beneath them to say, "Excuse me." Maybe they'd been spoiled by their experiences in straight bars. Or perhaps they felt that they should be rewarded for being open-minded enough to go clubbing with their gay friends.

I once had a woman at Beige, B Bar's now-defunct Tuesday-night gay party in New York City, practically shove me to the floor in her mad dash to get to the bartender before I did. When I told her to watch it, she made herself the injured party, calling me names and turning to her gay friends for backup. When that didn't work and the bartender served me before serving her, she became more enraged. This meant war.

She disappeared for a few minutes and returned with the bouncer. When he asked me if it was true that I had slugged her, I burst out laughing. Then he did too. He'd seen me there countless times, and he couldn't picture the scenario she'd offered him. "Poor thing," I thought, looking at the pitiful girl fuming in front of me. Had she been courteous and patient, she already would have been enjoying her cocktail like I was.

3. Gotta dance? Then step away from the bar and get on the floor! If anyone can appreciate the urge to shake it, it's a gay man. We're why God created dance floors and flashing strobe lights. So don't try to create impromptu dance floors everywhere, especially not in areas where guys are ordering drinks and/or chatting each other up. We know you're used to shaking your hips and getting attention from all the men in the room, but those sexy moves won't work here. Chances are that if someone catches our eye, it'll be one of the guys you keep knocking over.

4. Resist the urge to play matchmaker. Compliments are always appreciated, and it's great that you think so highly of your gay BFF too, but as in the workplace or any other place in everyday life, two men won't automatically want each other just because they're both gay. The middle-aged mother at B Bar who just had to get my phone number to give to her son was acting completely within reason, because he wasn't there. When your gay BFF (or son) is standing beside you, though, a simple introduction will do.

I met my last boyfriend, Jayden, and the guy I dated after him when I was introduced to them by the straight women they were with, neither of whom had any motive other than being polite. So overselling either one of us is unnecessary, for our bullshit detector is as powerful as our gaydar. And if there's no mutual attraction, it could make for a particularly awkward moment. If we dig each other, we can take it from "Nice to meet you."

5. Straight women are most adorable in gay bars one, maybe two, at a time. I know Sex and the City created the rule that women must go out in groups of four, but that doesn't apply to places where men go to meet each other. If you must, though, remember that in the Sex and the City episode where Carrie and company went to the gay club, they didn't try to take over the place. Lord knows it's always "ladies' night" somewhere. Wouldn't that be a much better setting for your next bachelorette party?

Not for a second do I believe that there isn't a way for gays and straights to coexist peacefully in nightlife. When I lived in Buenos Aires, a number of bars and clubs there were mixed, so-called "gay-friendly," welcoming both gays and straights. Interestingly enough, I never had a problem with any straight women in any of them. In fact, sometimes I had a better time with them than I did with the gay men.

Maybe the even playing field -- everyone had an equal shot at hooking up -- meant nobody had to overcompensate. Though it was sometimes frustrating trying to figure out which guys were available and which ones weren't, I enjoyed the atmosphere of acceptance and the absence of gay-bar and straight-bar clichés. It also represented a world I wish existed on the outside during regular business hours: gays and straights in harmony, open and free to be whatever they wanted to be, and most importantly, treating each other respectfully and waiting their turn.

What a wonderful world that would be.