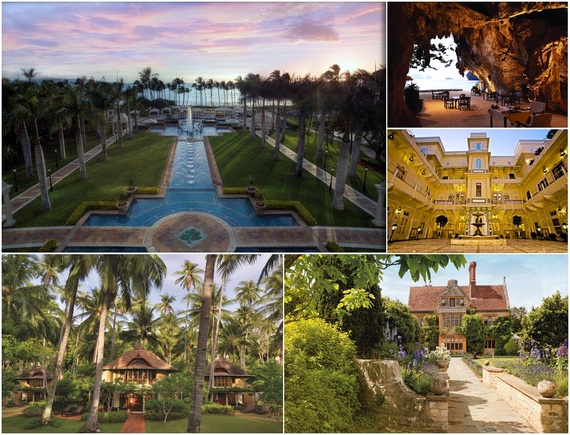 Every year, some of Hollywood's biggest stars get snubbed during the film awards season. This year is no exception. Many believe Jennifer Aniston, Jake Gyllenhaal, Angelina Jolie and others were "robbed" of Academy Awards. That's why hotel search trivago.com is recommending places those forgotten few can hide from the spotlight and sulk in secret after the curtain falls on this weekend's ceremony.

THE SNUB - Despite Golden Globe, Screen Actors Guild and Critics' Choice Award nominations for Best Actress, Jennifer Aniston was ignored by the Academy Awards for her dramatic leading role in Cake. She has earned her "sulk-ation!"

SULK-ATION SPOT - Jennifer LOVES to spend her downtime in Cabo San Lucas, Mexico, so we feel she would completely forget about the Oscar snub while vacationing at The Resort at Pedregal. The secluded and luxurious cliffside hideaway comes complete with private plunge pools, a full-service spa and personal assistants to cater to this overlooked actress's every whim.

THE SNUB - David Oyelowo took home a Best Actor statue at the Golden Globe Awards for portraying Martin Luther King Jr. in Selma, but Oscar voters missed the memo on his highly-acclaimed performance.

SULK-ATION SPOT - "There's no place like home," right? That's why we believe Oyelowo should visit his hometown of Oxford, United Kingdom for a stay at the historic and enchanting Belmond Le Manoir aux Quat'Saisons hotel. Quiet nights by a roaring fire, strolls through the English gardens and a meal at Chef Raymond Blanc's two Michelin Star restaurant are just what the doctor ordered.

THE SNUB - Amy Adams won the Best Actress award at the Golden Globes for her work in the film, Big Eyes, and was also nominated for a BAFTA - England's version of an Oscar -but that wasn't enough to earn her a golden statue.

SULK-ATION SPOT - Amy skipped out after a SAG Awards snub last year and spent the day at a California beach with her family instead. This year, we recommend a getaway to Grand Wailea Resort on Maui - a luxurious, beachfront Waldorf Astoria property with an on-site art museum, spa, 20,000-square-foot children's resort and views that would make anyone forget their troubles.

THE SNUB - Angelina Jolie has been nominated for five acting Oscars during her career, but that wasn't enough to convince the Academy that she was worthy of a nomination for Best Director for her work on the wartime drama, Unbroken.

SULK-ATION SPOT - With six children and a superstar husband by her side, Mrs. Jolie-Pitt needs plenty of space for her awards season escape and the Maharajah's Pavilion at the Raj Palace Hotel in Jaipur, India definitely fits the bill. The ultra-luxurious private four-floor, four bedroom, 16,000-square-foot apartment is the largest suite in Asia and includes a library and study area for the kids, and a private bar, swimming pool and spa.

THE SNUB - Jake Gyllenhaal's work in Nightcrawler earned him SAG, BAFTA and Golden Globe nominations, along with critical praise, but instead of an Oscar he's earned a break from Tinseltown.

SULK-ATION SPOT - Seclusion is key when escaping the paparazzi and the Rayavadee Hotel on the edge of Krabi Marine National Park in Thailand offers that in spades. Accessible only by boat, the luxury hotel is surrounded by palms, tropical gardens and coconut forests and even features a restaurant tucked inside a limestone cave on its white sand beach. It's a perfect retreat for an avid surfer with a severe case of disappointment.