Co-authored by Mark Hyman, MD, a practicing family physician, a seven-time #1 New York Times bestselling author, and an internationally recognized leader, speaker, educator, and advocate in his field. He is also the founder and medical director of The UltraWellness Center, chairman of the board of the Institute for Functional Medicine, a medical editor of The Huffington Post, and a regular medical contributor on Katie Couric's TV show, Katie. 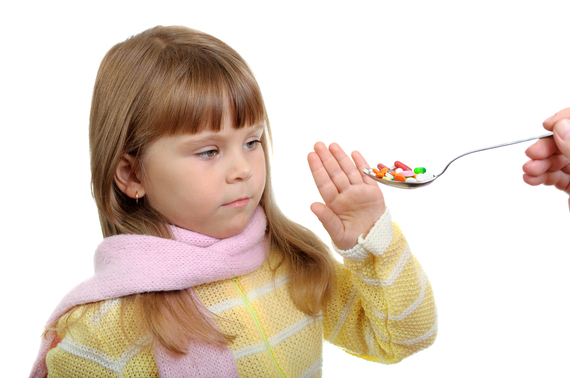 Millions of Americans take over-the-counter painkillers like Advil or Aleve for any random ache, pain, or cold symptom, without a second thought. What most don't know is that those drugs -- called non-steroidal anti-inflammatories (NSAIDs) -- are responsible for over 16,000 deaths per year: that's more deaths per year than caused by asthma or AIDS.

Here's one girl's story of recovery:

Sarah is a 5-year-old girl who was brought to us as a patient of The UltraWellness Center by her mom. She came in for the treatment of severe pain and swelling in multiple joints including her ankles, elbows, and fingers.

Walking was painful, as was drawing, one of her favorite activities. Her mom and teachers also noticed that she'd changed from her playful, vibrant self, to an anxious child.

Sarah had been in perfect health until about a year before she came to see us, at which time she'd developed a bad cold -- with fever that persisted on and off for about a week.

The pediatrician instructed Sarah's mom to alternate giving Sarah ibuprofen and Tylenol around the clock to help with the discomfort of fever, and to bring it down. This is standard fare in pediatric care.

What Doctors Know... And Don't Know... About NSAIDs

Doctors are taught that ibuprofen, a drug in the family of NSAIDs, can cause gastritis. In our medical training we learn that it can lead to stomach ulcers that, in extreme cases, can result in upper-gastrointestinal bleeding and the need for surgery and blood transfusions.

Generally, we are taught that this is uncommon and only occurs with prolonged use in high doses.

However, what Sarah's pediatrician didn't know, and in fact, what most doctors don't learn in their medical training, is that even short-term use in regular doses can lead to gut damage and negative health consequences.

Many scientific studies conducted over the past two decades show a correlation between NSAID use and leaky gut syndrome (LGS).

According to a study by the National Institutes of Health (NIH), "All the conventional NSAIDs studied were equally associated with small intestinal inflammation apart from aspirin and nabumetone which seem to spare the small bowel." Another study concluded, "NSAIDs are thus shown to disrupt intestinal integrity and long-term treatment leads to inflammation of the small intestine."

In this young patient's case long-term was just over a week!

Why Leaky Gut is Bad for You

Why is leaky gut bad? Because toxic bacteria and food proteins "leak" into your bloodstream, triggering inflammation that can lead to allergies, autoimmune disease, depression, obesity, type 2 diabetes, heart disease, and even cancer.

Not only that, inflammation can affect the brain and nervous system, causing anxiety (as happened to our patient), depression, irritability, and mood swings.

And, if you have gluten sensitivity? Whoa, baby! Ibuprofen and other NSAIDs might not be your best option because they can make it worse!

These medications increase leaky gut, or more technically, intestinal permeability. Intestinal permeability allows food particles and fragments of the gut flora in our intestines to get across our gut lining and into our bloodstream, triggering food sensitivities, inflammatory responses, and autoimmune reactions.

Functional Medicine: Treating the Root Cause

Most often, NSAIDs do not treat the root cause of the pain, they treat the symptoms. Functional Medicine treats the underlying causes of health problems.

In Sarah's case, we quickly went to work healing her gut in order to treat what had now become arthritis in her joints, constant stomach pain, and anxiety.

We removed all gluten and dairy from her diet because with leaky gut and inflammation, these are common triggers for many people -- even for those who weren't previously sensitive.

We then added in a few simple supplements to begin to heal the gastritis -- the inflammation in her stomach -- and her leaky gut. These included curcumin (an anti-inflammatory extract from turmeric), DGL (a form of licorice in a chewable tablet that helps to heal gastritis and leaky gut), zinc, and L-glutamine.

In just a couple of short months since coming to see us, Sarah is off of her antacid medications. She is joint-pain free, and her anxiety is resolved. Once again, she is playing comfortably and happily. Her stomachaches, which were previously severe and occurring multiple times daily, are almost entirely gone. Her mom said she's made a 180-degree turnaround, and she can't even believe the changes.

We can. We see these kinds of results every day in our practice specializing in Functional Medicine, for anyone with chronic health problems.

That's what happens when we understand and treat the root causes of disease!

Here Are Five Steps to Heal Your Leaky Gut: