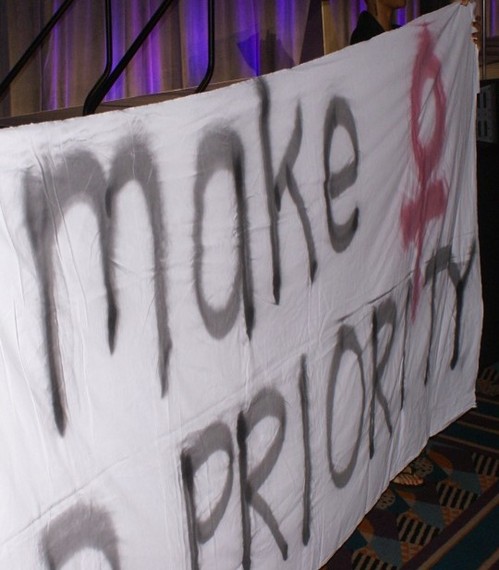 Remember the old saying, "If you fail to plan, you're planning to fail"? Well, women advocates living with HIV are trying to help the US out of exactly this predicament.
Recently, Positive Women's Network - USA, the premier national voice of women with HIV, released a five-point set of recommendations to help the White House Office of National AIDS Policy (ONAP) hone its plan to address the domestic HIV epidemic. That plan is called the National HIV/AIDS Strategy (NHAS) and it's currently up for a five-year revision. The first version of the Strategy, released in 2010, did not state a single concrete goal addressing HIV prevention or care for women, despite the facts that women comprise a quarter of the US HIV epidemic and less than half of women with HIV in the US are in consistent medical care. With these kinds of numbers, you would think women would be a priority, instead of an afterthought.

Advocates for women have pointed out the error of the first NHAS in not addressing the urgency of the HIV epidemic for Black women, among whom HIV rates are far higher than any other group of women. Further, the NHAS failed to draw vital connections between sexual and reproductive health and HIV. Women with HIV often face stigma in healthcare settings related to sexual and reproductive choices, which can result in worse health outcomes. For example, we've known for decades that women with HIV can have children without transmitting the virus, with appropriate care and treatment. Further, ongoing research has proven it's virtually impossible to acquire HIV through sex with a person whose HIV is successfully treated. Yet it is well documented that healthcare providers don't consistently provide care that affirms the sexuality of women with HIV, or supports their desire to have children.

The first NHAS further failed women by not highlighting the impact of violence and trauma for women with HIV, who experience intimate partner violence at more than twice the rate of the general population of US women, and post-traumatic stress disorder (PTSD) at more than 5 times the national rate, according to data released in 2012. Further, women with HIV who reported recent trauma were 4 times more likely to face challenges with taking HIV medications. The failure to address the effects of lifetime trauma may be the missing ingredient in effectively keeping women with HIV in care, as a << recent article in the journal Women's Health Issues http://www.whijournal.com/article/S1049-3867(15)00033-X/fulltext >> points out.

The bottom line is that women with HIV occupy spaces where the impacts of racism, patriarchy, poverty, transphobia, trauma, and HIV intersect, and profoundly impact the quality of their lives. Services for women must proactively address these conditions, and the barriers they present.
A piece of good news is that with today's treatments, access to quality care can make HIV a chronic, manageable condition. Because of this, and as the population of women with HIV has aged, the primary focus in addressing the HIV epidemic is no longer developing effective treatments - rather, it is getting care and treatment to those who need it. This requires addressing quality-of-life issues that may present barriers to care, including mental health and employment-related services, and addressing policies that stigmatize and criminalize people with HIV. And care and treatment don't work unless women can get to them and afford them.

For women, addressing HIV in 2015 demands a multifaceted response, one that accounts for the various interconnected factors shaping their lives and looks towards securing health, dignity, and long-term well-being.

To that end, here are five key recommendations developed by women with HIV for making women's needs a priority in the next National HIV/AIDS Strategy:

Wherever people with HIV go for care - and whichever payer is covering costs, whether it is private insurance or Medicaid or the Ryan White Program - a minimum standard of care should be in place and upheld. Such a standard must ensure culturally relevant and affirming sexual and reproductive healthcare for people with HIV at all life stages and of all gender identities, including transgender women, as well as provision of trauma-informed care, including but not limited to screening and intervention for PTSD, depression, and intimate partner violence.
This standard must also include the "glue" that is essential to keeping thousands of women with HIV connected to care and treatment: facilitative services, including childcare, transportation, substance use and mental health services, and housing, for those who need them.

2. Expand Access to Care and Improve Quality of Care for Black Women Living with HIV

In light of the devastatingly high rates of HIV among transgender women, ONAP should similarly develop a national initiative focused on culturally relevant prevention, HIV testing, and high-quality care for transgender women. This must include a mandate for HIV testing and care facilities funded with federal dollars to start asking clients the two-step question to accurately assess gender identity: "What gender do you identify as now?" and "What was your assigned sex at birth?" Further, ONAP must keep vigilant watch over ACA implementation to ensure that the needs of transgender women living with HIV, especially transgender women of color, are fully and adequately addressed in healthcare delivery.

Women make up over half of HIV infections globally, and it's long past time that we develop affordable, acceptable, and low-toxicity HIV prevention options that are fully in women's control. Like birth control pills, women need HIV prevention options that do not require consent from their male partners. One promising intervention - pre-exposure prophylaxis, or PrEP, exists - but has not been promoted or made widely available to women.

Underpinning all of these recommendations is the need for any major policy decisions impacting people with HIV to be made in meaningful consultation with people living with HIV and the networks that represent them. Networks are accountable to the constituencies they represent, are in regular contact with people with HIV throughout the country, and can bring significant expertise to bear on planning and decision-making processes that impact the lives of people with HIV.

It's National Women's Health Week! Want to show your support for health policy recommendations made by and for women who are most impacted by health disparities? Take to Twitter between May 10 and May 16 using the hashtag #NWHW to share your perspectives, and check out #pwnspeaks for the points of view of women advocates living with HIV and their allies.