Blame. It's one of those things that seem to be a part of all kinds of relationships. It's in our relationships with family members, with our partners or spouse, with friends and it can even be with our co-workers.

What is a common word in any of these examples? Yep, that's right it's saying "you." It's all "you did X" or "you did Y." Sometimes there is also the element of saying the word "never" as well, which is clearly just an exaggeration. It's not necessarily that the person "never" does what you ask, but that they don't do it sometimes.

So the first step of the battle is being sure that we catch ourselves getting into the habit of blaming.

#2 -- Take a moment to get centered. Often when we are blaming it's not that we are doing it from a balanced and centered place. We aren't thinking and seeing things clearly. More than likely, we're stressed out because of various things that happened during our day or triggered by something.

So immediately after recognizing that you're doing the "blame game" be sure to stop and take some time to get centered in yourself. Take some deep breaths. Walk around a little bit. Jump or shake your arms to let out the stress and tension of it all. Look around at the different items in the room.

Any of these little tools can help you to get centered back into yourself so you can think clearly and respond to the situation in an effective way rather than to just mindlessly react to what is happening, like most of us do often.

#3 -- Recognize that you and this other person are both equals. When we're blaming, we are coming from this mentality of, "You're wrong and I'm right." It involves putting yourself on a pedestal and making yourself appear all perfect and good, then condemning the other person and making them appear imperfect, flawed, and wrong.

Not exactly something we want to be doing in a marriage where both people are meant to be equals, right?

Exactly. Yet, unfortunately being in a continuous state of blaming can often be one of the big causes for divorce.

So, it's important to recognize this illusionary thinking that blocks us from truly experiencing and expressing love.

Once you have identified your thoughts and feelings, phrase them into an "I" statement. For instance, you may want to say something like, "I'm angry because there is a mess in the living room" or "I feel upset because I don't think we talk as much anymore."

Be sure that when using these statements that you don't say something like "I feel you're not listening to me" -- because that is not true. That is a thought and not a feeling. So be sure that you're identifying an emotion if you use the word "feel," because if we don't the other person will likely still think they are being blamed.

Don't believe me? Reflect back on times where people have told you something like, "I feel like you don't care about cleaning up the apartment." What's your initial reaction? It makes a difference.

Finally, when you're making an "I" statement be sure that you don't fall into the blame game again by saying something like "I'm upset because you don't listen to me." There is still a "you" there.

So be sure to really own your own experience and take responsibility.

#5 -- Apologize. If you've said something where you were really blaming the other person, then be sure to apologize to them. If you're dating or married to this person, be sure you express your love and affection to them. Doing so will help bring the two of you closer to each other and help deepen the relationship. 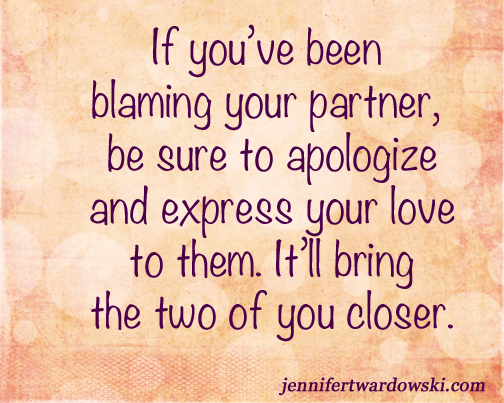 Click to Tweet: If you've been blaming your partner, be sure to apologize & express your love to them. It'll bring the two of you closer. via @jenilyn8705

How have you been blaming in your life? Share it in the comments below!

Jennifer is a self and relationship coach and the founder of JenniferTwardowski.com. Her mission is to help women awaken to the love that they possess within themselves so they can create more loving relationships in their lives. Click here for her Free Self and Relationship Healing Meditation and weekly blog updates. To learn about how you can work with her, click here.