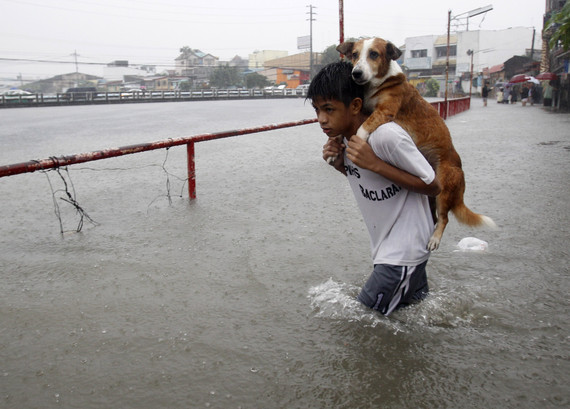 Here's my list of five headline-grabbing stories in 2014 that show just how connected human health and animal protection are:

After reports of his bridge scandal, the New Jersey Governor's 2016 presidential ambitions took a nosedive. That's why many see his recent veto of a bill that would have banned gestation crates as an attempt to win back influential voters. Pork industry groups -- especially the Iowa-based National Pork Producers Council -- opposed the bill. Christie's veto was made as a concession to Iowa's primary voters. But Christie sold out both animals and humans for campaign favors.

Most breeding pigs in the U.S. are confined for virtually their entire lives in gestation crates as they endure cycles of repeated impregnation. These individual cages are so small-- approximately 2 feet wide that the animals can't even turn around. In addition to causing immense suffering in animals, these confinement practices increase their stress, making them vulnerable to infectious diseases like E. Coli and swine flu. These infectious diseases are then passed on to humans.

The Ice Bucket Challenge drew public attention to not only the plight of people living with Amyotrophic Lateral Sclerosis (ALS), but also to the ineffectiveness of animal experimentation. Videos went viral as people opened their wallets to support the ALS Association. Then Pamela Anderson came along and posted a courageous challenge of her own to the ALS Association: to not use its newfound wealth in continuing animal experiments. Despite decades of effort and millions of dollars spent, animal experiments have not led to a single effective treatment for ALS patients. By replacing outdated animal experiments with effective and ethical human-based testing methods (like human organs-on-a-chip), both patients and animals win.

3. The David and Goliath of Business

In a surprise move, food giant Unilever, the maker of Hellman's mayonnaise, filed a lawsuit against a small, socially conscious, start-up company, Hampton Creek. Unilever claimed that Hampton Creek's egg-free and dairy-free product Just Mayo was mislabeled because it does not contain eggs. It contented that consumers equate "mayo" with mayonnaise, which must contain eggs.

This bullying by Unilever was considered so ludicrous that far from hurting the much-smaller Hampton Creek, the suit provided priceless exposure to the startup and an outpouring of support. Sales of Just Mayo rose three-fold since the lawsuit was filed. Unilever eventually dropped its lawsuit, which is a victory for human health and animals. Just Mayo is a much healthier option than regular egg-ridden mayonnaise. And, since most eggs come from cruel factory farms, Just Mayo is better for animals too.

Kim A. Williams, M.D., a cardiologist at Rush University of Chicago, was voted the next president of the American College of Cardiology (ACC). This is big news because he is the first vegan cardiologist in this position. In 2003, Dr. Williams noticed that his bad cholesterol, LDL, was too high. Six weeks after adopting a vegan diet, his cholesterol dropped to a healthier level. Now, Dr. Williams is a strong advocate for plant-based diets to stay heart-healthy, trim, and diabetes-free. As president of the ACC, Dr. Williams will have an even greater influence on health policy that will improve the lives of millions. Not only are plant-based diets better for humans, they are also better for cows, chickens and pigs.

5. Hush-hushing the Cause of Ebola

One of the biggest news stories of 2014, Ebola started with just a few cases in Guinea. Little did we know that it would become the deadliest Ebola outbreak on record. More than 6,000 people have died from the outbreak out of more than 17,000 total cases. The contagious disease created a global epidemic that is still ongoing. While numerous news stories examined just about every angle of the epidemic and the panic it caused, there was hardly any discussion about how we got Ebola in the first place. This is an atrocity. If we don't openly discuss and tackle Ebola's cause, we can't prevent another epidemic.

Ebola is normally transmitted to humans by the hunting, butchering, and eating of animals like fruit bats, monkeys, chimpanzees, and pigs caught from the African "bush." The bushmeat trade is just one part of a much larger wildlife trade, where animals are shipped around the globe or killed on site in profoundly cruel ways. Not only do animals suffer from this trade -- so do humans. In addition to Ebola, the trade has led to the emergence of other deadly human pathogens like SARS, monkeypox, and HIV.