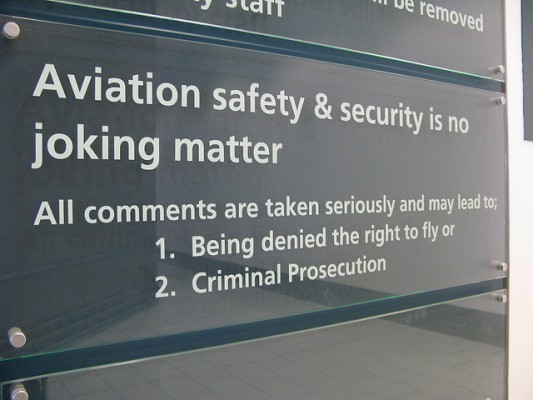 You'd be surprised by the types of items that make their way through airport security -- from corkscrews and screwdrivers to wrenches and lighters. What's more, the Transportation Security Administration (TSA) announced on March 5, 2013, that its list of "Prohibited Items" will soon shrink. As of April 25, 2013, passengers will be allowed to bring pocket knives, hockey sticks, billiard cues, ski poles and golf clubs on board with them. Although this security move has been widely contended by everyone from flight attendants to victims of 9/11, these potentially dangerous items will join a long list of questionable carry-on cargo.

When discussing unusual objects permitted on commercial flights, the 2006 film, Snakes on a Plane, immediately comes to mind: Actor Samuel L. Jackson's character spends his in-flight time battling -- you guessed it -- snakes. In the movie, the snakes caused quite a commotion in the cabin, but in real life, they technically have a right to fly (providing that they're transported according to TSA guidelines). And don't be surprised if you see a monkey flying first-class; simians are welcome to fly on some airlines as long as they've got "service animal" status. Shocked? Keep reading for more unusual items allowed on board.

TSA prohibits travelers from flying with scissors that have pointed blades longer than 4 inches. Transportation security officials classify scissors of this size as a "sharp object" that could potentially be used to harm fellow passengers.

But you can bring... Knitting needles

Lucky for crafts folk, knitting needles and crochet hooks are conveniently excluded from TSA's "Prohibited Items" list. Although their long length and pointed (albeit not sharp to the touch) ends could pose a threat to fellow flyers, TSA officials let knitting needles pass through security checkpoints. However, don't be surprised if you encounter a TSA agent who prevents you from carrying on your craft's tools. To avoid an unpleasant scenario at security, arm yourself with a less-threatening set of needles, such as a pair of circular needles made from wood or plastic. When passing through airport security, you can save your carry-on from a thorough search by removing your needles and other equipment from your bag and placing them straight in the plastic bin. As for specialized tools, like circular thread cutters: You're better off packing those in your checked luggage.

Understandably, this spear-like tool used for chipping and carving ice cannot be carried into the cabin of an aircraft. Standard ice picks feature a sharp, metal rod that could be used as a weapon.

But you can bring... Ice skates

Figure skaters and hockey players rejoice: Your bladed footwear does not appear on the TSA's "Prohibited Items" list. Although the blades can be dangerous to fellow passengers, especially if they have toe-picks (just ask a synchronized skater), security officials do allow skates through the security checkpoint. However, some airlines may require passengers to check their skates at the gate for security reasons or space limitations. Before heading to the airport, stow your skates in a bag small enough to be considered a carry-on item, and make sure the blades are covered. Also, bear in mind that some airlines do not permit skates to fly in the cabin. You'll want to confirm with your airline that skates are allowed as carry-on luggage.

[See: How to Fly through Airport Security]

According to TSA guidelines, "gellin'" passengers will not be allowed to pass through airport security. Gel shoe inserts -- which help alleviate back and foot pain by providing more support to your soles -- exceed the 3.4-ounce limit on carry-on liquids.

But you can bring... Snow globes

As long as it appears to contain no more than 3.4 ounces of liquid and can fit in the clear, re-sealable security-check bag, these popular items can be brought on board. Whether it's a souvenir from your trip to Disney World or a holiday gift for grandma, your snow globe should have no problem securing a place with you on the plane. Because there's no real way to measure how much fluid a snow globe contains, you'll have to estimate. Here's a rule of thumb, according to the TSA website: If the snow globe is larger than a tennis ball, it's probably too big to fly.

Believe it or not, this is a rather common occurrence in the travel world: To save on the high cost of transporting a deceased loved one, travelers attempt hide the body in a carry-on bag or disguise the body to make it appear alive. Big no-no: Even if you somehow pass through airport security, your flight attendant is bound to catch on sooner or later.

But you can bring... Cremated remains

Although certain airlines will not allow travelers to board the aircraft with cremated remains (you should call the airline before booking your ticket to verify), TSA officials will never open and sift through a crematory container. But while security officials strive to be as respectful as possible, they must do what is necessary to protect all passengers, meaning the container will have to pass through the X-ray machine along with your other carry-on items. To make this process easier, store your loved one's remains in a container made from a light-weight material -- like wood, cardboard or plastic -- that will allow security a clear picture of what's inside. Urns made from metal or other heavier materials can obscure the X-ray image; if this happens, TSA agents will not allow the item past the security checkpoint.

[See: 5 Ways Your Health Can Hold You Up at Airport Security]

No, you can't bring... Throwing stars and nunchucks
These objects -- along with brass knuckles, billy clubs and pepper spray -- are listed on the TSA's "Prohibited Items" list. Even if you envision encountering ninjas on your flight, it's best to pack these items in your checked luggage.

But you can bring... Whips and chains
If the action you're anticipating belongs behind closed doors, then you'll be glad to note that you can pack your adult toys in your carry-on. Just be aware that items such as handcuffs and whips will be noticed at the security checkpoint, which could lead to an awkward (and public) conversation with TSA agents. Most adult toys are allowed in the airplane cabin. However, you will want to remove the batteries from any electronic items -- the last thing you want is for something to start buzzing should your bag need to be searched or while you rifle through your personal items mid-flight. And as for oils or gels: As long as they comply with the 3.4-ounce rule and you're not too embarrassed to lay them out in a clear plastic bag at airport security, you're good to go. Just don't plan on joining the "Mile High Club"; although it's not technically against the law, it is illegal to disobey crew member instructions. Flight attendants will notice what you're up to and ask you to return to your seats.