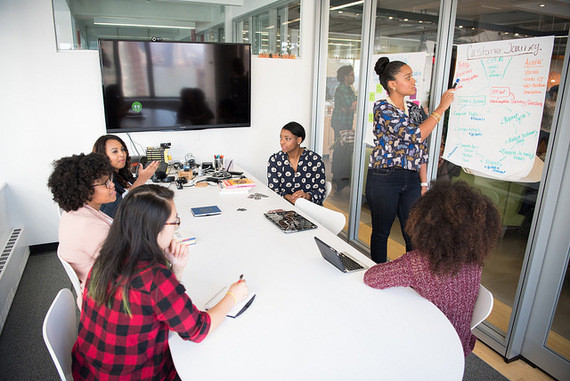 In recent years, more and more technology companies are regularly releasing diversity numbers related to the number of women and other underrepresented minorities in their workforces. Recently, I wrote about why it's important to acknowledge the gains these tech companies are making -- a 1 percent growth may seem small, but it actually represents a considerable number of people in aggregate when you consider the size of some of these firms. As more announcements come in from companies like Intel, Apple and PayPal, it's helpful to highlight the tactics and policies that have the greatest impact on diversifying the technical workforce.

Here are my main takeaways from the recent string of tech diversity announcements, including four things tech companies are doing well, plus one area where the whole industry continues to struggle.

Measurable, long-term change hinges on concrete commitments -- something we have seen at Intel, which has committed $300 million to support the company's goal of achieving full representation of women and other underrepresented minorities in their U.S. workforce by 2020. The company also committed to grow the pipeline of technical talent for the industry at large, improve diversity in its supply chain and vendors, invest in diverse entrepreneurs of emerging technologies and support women in gaming. Intel also includes a diversity goal as part of its company-wide bonus program, holding all employees accountable.

Such concrete commitments are crucial to driving real change, and every employee at the company must see themselves as an integral part of the solution.

When Google first disclosed its diversity statistics in 2014, it set off a movement that has made the tech industry better as a whole. Releasing these numbers is a good start but to drive lasting change you need to understand the numbers in detail.

Companies must closely examine what their workforce looks like with a nuanced lens - starting with an industry standard definition of the technical workforce, something the Anita Borg Institute (ABI) has established with our Top Companies for Women Technologists program, and breaking the data down by level. This year, Google made progress on growing its representation of women in technical roles. It also shared numbers around other underrepresented minorities, notably black and Latino technical workers. These numbers stayed flat year over year, but the fact that Google and others are sharing such detailed numbers, even when they clearly show that there's a lot of room for improvement, benefits the industry as a whole.

Bottom line: disclosing diversity numbers, good or bad, contributes to our shared understanding of where we stand.

Women leaders are beacons for other women

Last year one of the insights from our Top Companies for Women Technologists program was that companies with women in leadership roles have greater representation of women overall. Senior and executive women serve as beacons for entry and mid-career women -- after all, if you join an organization where you see leaders who look like you, you know it is possible to advance and achieve your goals there. This idea of women leaders as beacons holds true in and out of technical roles. At Apple, 28 percent of its leaders (both tech and non tech) are women. That's a pretty strong number when you look at the industry overall, though the percentage stayed flat year over year. Google, in comparison, has a lower proportion of women leaders, but grew that number by 2 percent this year.

It's clear in their disclosure of these statistics that Apple, Google and others acknowledge the power of women leaders as beacons and the important role they play in growing the overall representation of women in the industry.

Many companies tend to focus on their recruiting numbers. And while recruiting is important, it tends to primarily impact entry-level workers. To drive lasting change, companies must also focus on retaining and advancing women technologists throughout their career paths. The diversity gap is more than just a pipeline issue -- it reflects an ecosystem where the visibility and success of senior and executive level women (or lack thereof) contributes to encouraging more women to enter the field, impacting the overall diversity picture.

Investing in programs that bolster the participation of women and underrepresented minorities in computer science education is also critical to driving measurable change. We're proud to partner with Facebook, Google, Intel and Microsoft on the Anita Borg Institute's BRAID initiative, which works with universities across the country to increase the representation of women and underrepresented minorities in their computer science departments. And BRAID is just one example -- these companies and others have made significant investments across the educational ecosystem.

These investments can have impact on the population of young women and girls who will grow into the next generation of technical leaders, and we applaud these continuing commitments.

Retention continues to be a hurdle

While recently released numbers indicate that companies have made progress when it comes to recruiting women and underrepresented minorities, organizations across the board still struggle to retain these key hires once they are in the workforce. We know that women technologists often get "stuck" at mid-level and then leave the tech workforce, many citing unsupportive cultures. The importance of retention policies can't be overstated, as strong retention feeds directly into advancement, which in turn feeds strong recruitment.

To truly drive long-term, scalable results, the industry still has a long way to go. We've made slow progress, but real change requires a long-term commitment that addresses all aspects of the ecosystem - education, recruiting, visible women tech leaders and a significant overhaul of the male-dominated industry culture. The Anita Borg Institute is in it for the long haul because we believe that when the people who imagine and build technology mirror the people and societies that use it, we all benefit.