It's a tragic thing indeed, but sometimes the biggest bully on the team is the coach. Both of my kids have experienced bully coaches, to varying degrees and with different outcomes. I've even experienced a bully coach as an adult playing rec sports. It's never any fun. Here are five signs that the coach is a bully: 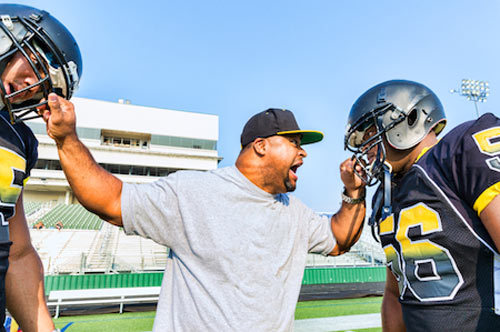 Your athlete is discouraged.

As I've written in a previous column, parents need to trust their instincts. When the kid who was enthusiastic about joining the team becomes discouraged and sullen, it might be a sign that's something's wrong. It's one thing to be temporarily discouraged from a bad game or a missed shot and then shake it off, but when your kid loses enthusiasm for the sport, doesn't smile when she gets in the car after practice or a game, and doesn't want to talk about it, something is wrong and the situation must be examined -- and repaired.

The coach yells at, rather than to, players.

A coach's job is to instruct the team and individual players. Sometimes, especially in outdoor venues, yelling is necessary to be heard, but there's a big difference between a coach yelling to players and a coach who yells at players -- and it isn't a difference in volume as much as tone and content. There are the times when coaches yell, "Good job on that save!" "Cover your player!" and "Move two steps toward third base." These are positive and instructional comments. But when the coach makes things personal or yells accusations, such as "How did you screw that up?" "What's wrong with you?" or "You're just not getting it!" that's when he has crossed the line and is yelling at players.

Just a few weeks back, it came to light that the coach for Spain's women's national soccer team, the coach for the past 27 years, has consistently used abusive language and made derogatory, demeaning comments to players. He's called the team "little girls" and told some of them they are fat. For almost three decades, this bullying behavior was known and allowed. This year, the players took a stand against the coach and for their self-respect. The team released an open letter requesting the coach be fired and while it remains to be seen whether or not Spain's national soccer federation will act on the players' demand, no one can dispute that the coach is a bully.

Sadly, I've seen similar behavior in youth coaches. We wouldn't allow a math or English teacher to call our child "stupid" or "fat" or "clueless," so why should we give coaches a free pass to do the same? We shouldn't. It's not a matter of "toughening up" the players, but rather it's flat-out bullying. And when youth coaches use profanity? That's unequivocally unacceptable and clearly bully behavior.

He only coaches the starters.

On youth teams especially, the general idea is that everyone gets a chance to play, learn, experience and develop. But when coaches permanently bench less skilled or "smaller" players and players the coach simply doesn't like, the coach isn't giving these players a chance to grow. It becomes a self-fulfilling prophecy that the good players who get time on the field will continue to refine their skills and that the players who aren't getting time on the field aren't getting the chance to become better. My daughter experienced this last year. No matter how many times she asked what she needed to do to get more playing time -- wanting specific goals and metrics -- he simply brushed her away. And the few times he did put her in, he yelled at her the entire time, telling her she wasn't doing the right thing, but not communicating what the "right thing" was. But, more importantly, the coach shut the door on the real value of participating in a team sport -- and on my child's love of the game.

There's a big difference between acting on generosity and acting out of guilt. Just like an abusive spouse, acts of physical and emotional violence are frequently followed by acts of contrition. Does the abusive coach treat the team to pizza or ice cream following a practice or game? Does this follow a pattern of typical or expected generosity, or does it create the impression that the coach is Mr. Hyde on the field and Dr. Jekyll off the field? Is the coach offering these treats as a bribe, so that the players don't complain to parents, league officials, or school administrators? "How bad can he be? He took you out for ice cream!" Again, trust your instincts because these gestures are often symbols of a guilty conscious rather than heartfelt generosity -- and are a sign that something is amiss.

In my next column, I'll talk about different strategies to deal with the coach who's a bully but until then, do you have any other signs for spotting the bullying coach? Or any particularly egregious examples of yelling at players or demeaning commentary? Let me know at emily.cohen@teamsnap.com or @emilygcohen on Twitter.