My son is an animal enthusiast! At two-years-old, he loves listing off the names of animals, pointing out insects and squealing when he recognizes specific fish. He's also slightly obsessed with our adopted chocolate lab. I know lots of mothers who wait until after their kids are older to get a pet, but in my case, we had our dog for two years before my son was born.

My dog is my son's best friend and partner in crime. My family and friends always get a kick out of the photos I share on social media of their shenanigans, but there are five things all moms should expect when raising a toddler who has a dog as their bestie. 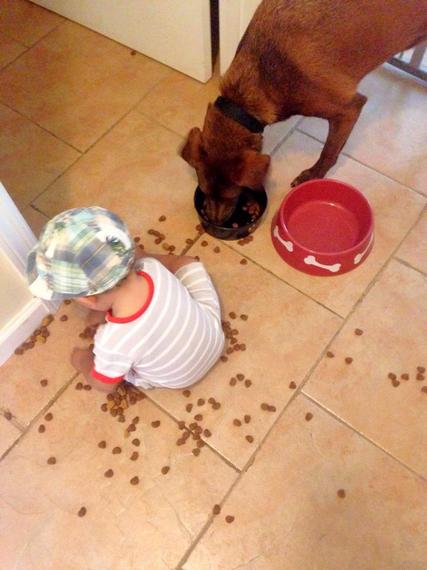 1) Sharing is very natural for both dog and child
• When my son was a year old, I found him in the dog bed with the dog, chewing on a dog bone! At 18 months, my son routinely got down on all fours to drink out of the dogs' water bowl, refusing to drink from his own sippy cup.
• Most recently, I've found my dog and son covered in peanut butter! My son has unfortunately discovered how to stand on things to acquire item out of his reach. He's especially fond of peanut butter and apparently, so is the dog. 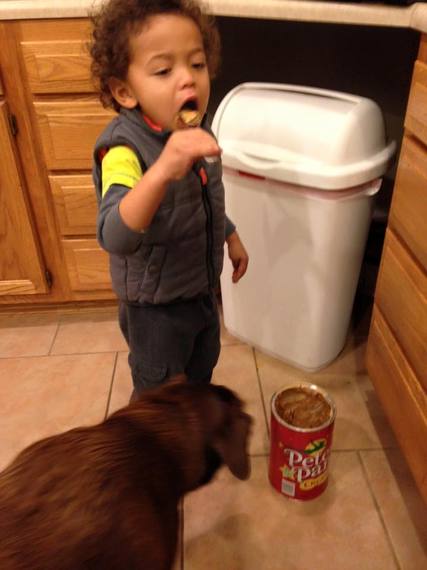 2) Your dog's bowel movements are intriguing to toddlers
• I was really amused over the summer, as my son followed our dog all over the yard. He would get down on all fours and sniff flowers with her, participate in chasing the neighbor's cat, and even pulled down his pants to pee on the tree a time or two. I was not so amused when I looked out my kitchen window to see my son squatting beside my dog. As the dog pooped, my son collected it in his hands and rubbed it all over himself!
• At his 2nd birthday party later that summer, my son walked up to my dog, who was pooping, pulled his pants down and pooped with her...in front of all of our guests! 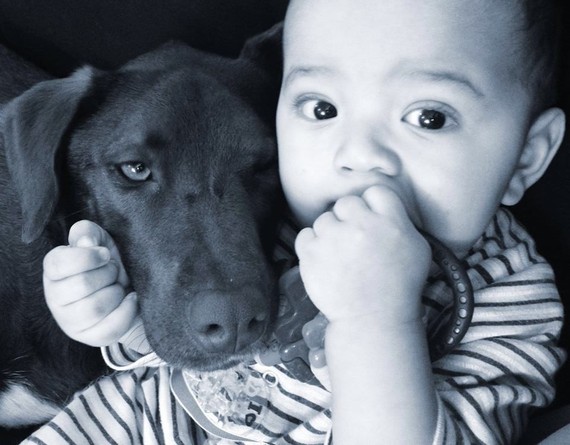 4) Prepare to be a referee between human and animal
• It's rather embarrassing, but commonplace these days, to referee my child and dog who are fighting over a toy. My dog is very well behaved and never touches my sons' toys but son is not so nice. If my son gets mad at the dog, he will take her stuffed animals and throw them in the trash!
• Sometimes, when my son is on the losing end of the argument, he will open our sliding glass door and try to send the dog outside. He tells the dog she's bad and if he's upset at her, he tells her she isn't being very nice! I must admit, it's quite difficult to keep a straight face when I try to calmly explain that the dog is sorry for her actions (like accidently knocking him over during play).

5) Trying to explain why the dog is treated differently will exhaust you
• For weeks, I've been having the same morning discussion with my son. Every morning, he wants to know why the dog doesn't have to wear shoes. This is not just of great interest to him, but consistently, he has been using it as his defense for not wearing shoes. Lately, as winter progresses, his argument has evolved into why the dog doesn't have to wear a coat. And yes, I've caught him putting his clothes on the dog.
• Since my son started daycare, he's always questioned why he has to go to school, but the dog gets to stay home. Many times he's begged to stay home with the dog instead of going to school and sometimes he even cries because he wants the dog to go to school with him.
• We've had a few feet of snow outside this past week so we've kept our son indoors as much as possible. Obviously, our dog has a good reason for why she needs to go outside a few times every day.

Try explaining to a two-year-old why it's ok for the dog to go outside but not him. I'll tell you, it's a losing battle and it is exhausting trying to find something to say that will help him understand!

At first I was really worried about my selfish dog accepting the arrival of my infant son. However, I quickly discovered that my dog is incredibly caring, loyal, and most importantly, patient! She's understanding when he pulls her tail, knows when to hide if my son has markers, and enjoys daily naps when the two get to cuddle.

I know my son adores and loves our dog and I'm so happy and thankful that they have each other. With that said, I am saving ALL of his embarrassing photos for when he hits the dating scene as a teenager!

More:
Toddlersparents-toddlersParenting funny animalsParents
Newsletter Sign Up
Raise the kind of person you'd like to know
Subscribe to our parenting newsletter.
Successfully Subscribed!
Realness delivered to your inbox